How Stereotypes Slow Athletes Down 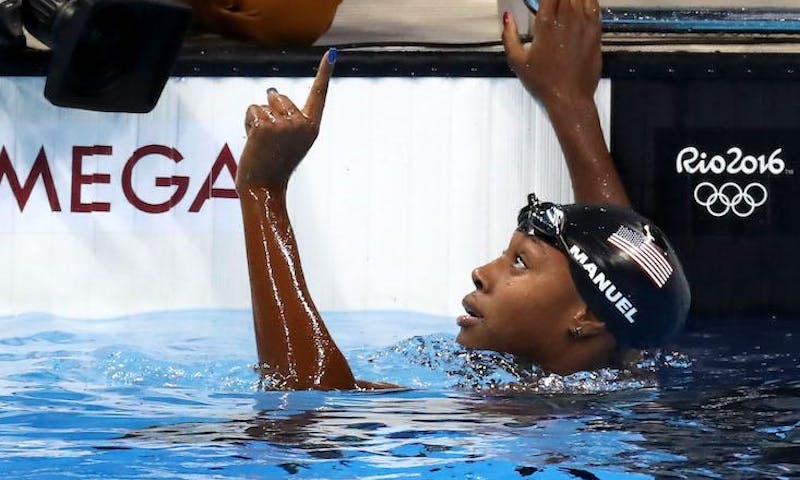 When Simone Manuel received the gold for the women’s 100-meter freestyle swim at the Rio Olympics in early August, the win represented more than just the culmination of Manuel’s many years of training and a victory for her country. It was a triumph over long-held racist stereotypes that black people are poor swimmers. Manuel was the first African-American woman in history to win an Olympic gold for swimming.

“It is something I’ve definitely struggled with a lot,” Manuel told USA Today. “Coming into the race, I tried to take weight of the black community off my shoulders,” she said. “The title of black swimmer suggests that I am not supposed to win golds or break records.” For Manuel, and the hundreds of other athletes who are minorities in their chosen sports, managing negative stereotypes is more than just a nuisance. A growing number of studies indicate such stereotypes can directly impact an athlete’s performance, a condition that social psychologists call stereotype threat.

Here’s how scientists think it works. When athletes are reminded of negative stereotypes that pertain to them—black men can’t shoot free throws, women are bad at soccer, Asians and Jews are less athletic than other ethnic groups—some of their focus is diverted to fear of confirming that stereotype and to avoiding failure. This diverted attention can interfere with the automatic responses, honed in training, that are required to perform well during a competition.

“We have practiced these actions a lot, we perform them without monitoring them,” says Sarah Martiny, an associate social psychology professor at the Arctic University of Norway, in Tromso. “What negative stereotypes can do is accentuate a worry component.” It’s not yet clear if the worrying happens on a conscious or subconscious level, but stereotypes can cause athletes to overthink their movements, causing them to perform worse.

A reminder of the stereotype has to be salient shortly before the competition, but the cue can be either overt or subtle, like a derogatory comment made while the athlete is walking out to the court. And the cue doesn’t have to reference the stereotype directly—if women are supposed to be bad at soccer, just reminding the athletes that they’re women can be enough to sabotage their performance.

“If you are aware that negative stereotypes can reduce your performance and you reflect on it, this can buffer the effect,” Martiny says.

The effect of stereotype threat is often small, measured in single points or fractions of seconds. There are other factors that are much more decisive in an athlete’s performance, like the amount of time she practices and trains. But for athletes competing at the highest levels, of course, the margin between winners and losers is often razor-thin. Every millisecond counts, and overthinking a flip, kick, or throw could be decisive.

Though scientists are just now beginning to study stereotype threat in the context of sports competition, their work builds on years of research into the ways it can influence performance on standardized tests. In one landmark study from 1999, Asian women who took a questionnaire highlighting their gender before taking a math test scored lower than average, but those with a questionnaire about their Asian identity scored higher (the conclusions of that study were called into question when it was replicated in 2014). A similar study, from 1995, found that a reminder of negative stereotypes about African-American verbal intelligence impaired the performance of African-American students who took a difficult verbal test.

Not all stereotypes are negative (like the Asian women who performed better on the test because Asians are presumed to be good at math), and a 2012 study showed that positive stereotypes can improve an athlete’s performance, though only when the athlete is being observed.

Over time, certain stereotypes have shifted. And sports has been one of the most prominent and obvious settings for the resulting frictions to play out, a litmus test for the country’s social climate. “We didn’t allow African Americans to be integrated in professional sports until a certain period,” the late 1940s, says C. Keith Harrison, a professor of sport business management at University of Central Florida. “Those things have impacted how people explain what they see in sports.”

One way athletes seem to be able to overcome stereotype threat is to override the negative association with a positive one. Martiny and several other scientists recently conducted a study to test the effect of stereotype threat on female soccer and basketball players. When the athletes were reminded of their gender before a game, they performed worse, but once they were reminded that they were part of a well-trained team, their performance improved—unless observers were present.

Researchers have a long way to go before they fully understand what sorts of psychological traits separate those who overcome racial and gender stereotypes and those who are sandbagged by them. But they have figured out a few things. Cognition-focused research has shown that students who believe that intelligence is fixed are more susceptible to stereotype threat than counterparts who think that intelligence is flexible, based on how hard a person works. In sports, that would translate to greater success if you assume you can only reach the top of your sport with significant practice and training instead of innate talent.

Sometimes simply correcting misinformation can go a long way toward dispelling the assumptions and myths that stereotypes enforce, Harrison says, though researchers can’t be sure this will result in improved performance without more long-term research. But for the individuals confronted with these stereotypes who know they are false, other forces can counteract the negativity that stereotypes foster. Some studies show that just knowing about stereotype threat can diminish its effect. “If you are aware that negative stereotypes can reduce your performance and you reflect on it, this can buffer the effect,” Martiny says.

Coaches can help athletes by focusing their rallying cries around positive associations rather than negative ones, especially before an athletic match. Male soccer coaches who say, “Girls, you can do this,” may intend to be positive, but their comment might make the negative stereotype that women are inferior at sports more salient, Martiny says.

Strong role models, too, can drain the power from negative stereotypes. “If I have a female math teacher, then it doesn’t matter so much what kind of stereotypes I activated before a difficult math test,” Martiny says. It’s best if there are multiple kinds of role models to show that there isn’t just one kind of person that can ascend to the highest echelons of a given field—young black girls know they can play tennis because they’ve seen Serena Williams do it, or be ballerinas because of Misty Copeland, but it would be even better if they had more women of any color or origin to look up to in their chosen sport.

Manuel might have had only a few black female role models to propel her through difficult moments. “I want to be an inspiration, but I would like there to be a day when it is not ‘Simone the black swimmer,” Manuel told USA Today. That day may be soon at hand. After Manuel’s gold, the stereotype that black women can’t swim might never slow them down.