How to Be Lucky

It pays to imagine your life is on a winning streak. 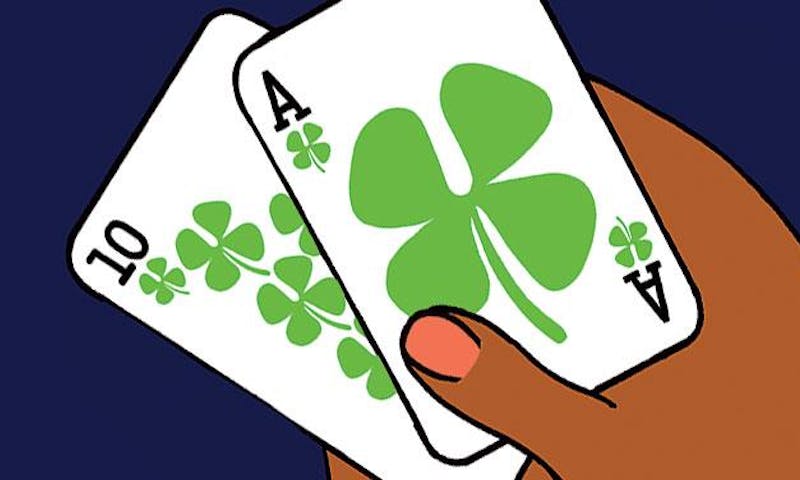 In 1995, a wounded 35-year-old woman named Anat Ben-Tov gave an interview from her hospital room in Tel Aviv. She had just survived her second bus bombing in less than a year. “I have no luck, or I have all the luck,” she told reporters. “I’m not sure which it is.”

The news story caught the eyes of Norwegian psychologist Karl Halvor Teigen, now an emeritus professor at the University of Oslo. He had been combing through newspapers to glean insights into what people consider lucky and unlucky. Over the following years, he and other psychologists, along with economists and statisticians, would come to understand that while people often think of luck as random chance or a supernatural force, it is better described as subjective interpretation.

Psychology studies have found that whether you identify yourself as lucky or unlucky, regardless of your actual lot in life, says a lot about your worldview, well-being, and even brain functions. It turns out that believing you are lucky is a kind of magical thinking—not magical in the sense of Lady Luck or leprechauns. A belief in luck can lead to a virtuous cycle of thought and action. Belief in good luck goes hand in hand with feelings of control, optimism, and low anxiety. If you believe you’re lucky and show up for a date feeling confident, relaxed, and positive, you’ll be more attractive to your date.

Feeling lucky can lead you to work harder and plan better. It can make you more attentive to the unexpected, allowing you to capitalize on opportunities that arise around you. In a study comparing people who consider themselves lucky or unlucky, psychologist Richard Wiseman of the University of Hertfordshire, author of the 2003 book The Luck Factor, asked subjects to count the pictures in a newspaper. But there was a twist: He put the solution on the second page of the newspaper. “The unlucky people tended to miss it and the lucky people tended to spot it,” he writes.

One of the easiest measures you can take to improve your luck is to shake things up.

On the other hand, feeling unlucky could lead to a vicious cycle likely to generate unlucky outcomes. Psychologist John Maltby of the University of Leicester hypothesized that beliefs in being unlucky are associated with lower executive functioning—the ability to plan, organize, and attend to tasks or goals. In a 2013 study, he and colleagues found a link between a belief in being unlucky and lower executive function skills like switching between tasks and creative thinking. Then in 2015, he and other colleagues found more electrical activity related to lower executive function in the brains of 10 students who believed themselves very unlucky than in the brains of 10 students who believed themselves very lucky. “People who believe in bad luck didn’t necessarily engage in some of the processes that are needed to bring about positive outcomes,” Maltby says.

He offers a simple example of running out of ink in the middle of a print job. “The lucky person will have got a spare cartridge just in case because they have planned ahead. When the cartridge runs out they’ll say, ‘Oh, aren’t I lucky, I bought one earlier, that’’ fantastic,’ ” Maltby says. “However, the unlucky person won’t have planned ahead, won’t have done the cognitive processes, so when the printer cartridge runs out and they’re left with something to print, they go, ‘Oh, I’m so unlucky.’ ”

If this kind of vicious cycle takes hold, it can make a big difference. Economists Victoria Prowse and David Gill of Purdue University think responses to bad luck might even explain part of the gender gap seen in the workforce. In a lab experiment using a competitive game that involved both skill and luck, they found that women were more discouraged by bad luck than men. After experiencing bad luck, women had a greater tendency to reduce the amount of effort they put into the next round of the competition, even when the game’s stakes were small.

Luck frequently plays a role in careers, Prowse points out. Whether you get a job could depend on how much time a manager has to look at resumes, or whether she likes a color you wear to the interview. Companies often hold competitions that pit employees such as salespeople against each other. “Even a small reduction in the effort of a woman after one interaction, where she gets unlucky, could potentially mean you miss the opportunity of getting promoted and getting to the next level, which has all sorts of future repercussions,” she says. “It would be dangerous to dismiss these small differences as something that couldn’t potentially accumulate to something we really care about.”

While personality and gender seem to play a role, random events could also kick-start a virtuous lucky cycle or a vicious unlucky cycle. Economist Alan Kirman of the École des Hautes Études en Sciences Sociales in Paris realized this could be the case when he worked in an office with relatively few parking places nearby. One guy on his team always seemed to get lucky with parking spots close to the office, while another always had to park far away and walk. To figure out why, the team created a simple game-theory model to simulate the situation. It revealed that if would-be parkers happened to find spots near work early on, they continued to search in a narrow radius in the following days. If they didn’t find spots near work early on, they began to search in a wider radius. Guess who had lucky streaks when it came to finding spots near work? The ones who were actually looking for them.

At least in the simulation, the parkers quickly sorted themselves into lucky and unlucky groups, without any reference to personality or gender, Kirman says. That means that a good or bad luck cycle could happen to anybody without their conscious knowledge. It also means that, to the extent that life is a zero-sum game like parking, our bad luck cycle could be facilitating someone else’s good luck cycle—and that’s maddening. “The unlucky guys learn to choose the spots far back and leave the spots for other spots for the guys who are ‘lucky,’ ” Kirman says.

If you believe you’re lucky and show up for a date feeling confident, relaxed, and positive, you’ll be more attractive to your date.

Of course, believing in your own good luck isn’t always a good thing. In gambling, for example, lucky streaks are never what they seem. Take the case of online sports betting. Juemin Xu, a graduate student at University College London, and her advisor, experimental psychologist Nigel Harvey, analyzed a 2010 database of 565,915 sports bets made by 776 online gamblers. In all those bets, they found something apparently at odds with laws of probability: Bettors were more likely to win after winning.

Those lucky streaks weren’t supernatural, Xu says; they were generated by the “gambler’s fallacy”—the widespread but misguided notion that your luck must eventually change. Thinking that a loss was imminent after a run of wins, bettors would make safer and safer bets, generating an even longer run of wins. Unfortunately, the bettors didn’t make much money off of these streaks; over time, they still tended to lose to the house. “The best strategy in gambling is to control loss,” Xu says.

Teigen points out that, in many activities, lucky is the opposite of safe. In one study he found that people who have lucky stories are often those who have taken a lot of serious, often careless, risks. For example, a woefully inexperienced paraglider told him about having averted a crash. Ultimately, that approach to courting luck could backfire. “I am a little bit careful about wishing people good luck,” he says. “I’d rather they be safe than lucky.”

The trick, then, may be to find the areas of life where you can be both safe and lucky. In the early 2000s, Wiseman capped his long study of lucky people with the creation of what he called a “luck school,” in which he gave unlucky people exercises that taught them to spot chance opportunities, listen to their guts, take an optimistic view, and not dwell on mistakes—in other words, to do the things that lucky people do. He reported that, a month later, 80 percent of the unlucky people in his school said they were happier and luckier.

One of the easiest measures you can take to improve your luck is to shake things up. Think about the case of looking for parking. If you always default to the areas with merely tolerable spots, you’ll never find a really good spot. Similar types of routines can settle in at work, at home, or in your social life. To introduce variety, one of Wiseman’s subjects picked a color before going to a party and then introduced himself to all of the people wearing that color. Another frequently took different routes to work.

More difficult, perhaps, is to learn how to not dwell on bad luck. Studies have found that people who are victims of assaults and accidents tend to ruminate on questions like “Why me?” or “What did I do wrong?” This strategy is adaptive only if the victim can learn something that will help them avoid a similar disaster in the future. But that’s often not the case, and people are left with envy, self-blame, and useless, invasive thoughts.

However, certain kinds of unfortunate events—even very serious ones—seem to result in the mirror-opposite of this line of thinking. Teigen and his colleagues read interviews with 85 Norwegian tourists who took family vacations in Southeast Asia in the winter of 2004. When the devastating earthquake and tsunami hit, their and their children’s lives were at risk, their Christmas holidays ruined. Unlucky, right? Well, not from their perspective. Two years later, 95 percent of them said they had been lucky to survive, not unlucky to have picked that moment to travel there. (The remaining 5 percent said they had been a combination of lucky and unlucky.)

The key to deciding whether an event is lucky or unlucky is the comparison you make between the actual event and the “counterfactual” alternative you’re imagining, Teigen says. The people asking “Why me?” are making an upward comparison to other people who weren’t assaulted or who avoided an accident. The people who feel lucky to have survived are comparing themselves downwardly to people who had a worse fate. Both are valid interpretations, but the downward comparison helps you to hold on to optimism, summon the feel-good emotion of gratitude, and to weave a larger narrative in which you are the lucky protagonist of your life story.

Consider George Bailey in It’s a Wonderful Life. He embraces life again after an angel takes him on a tour of what the world would have been like had he never been born. In a 2008 study, researchers found that subjects who took themselves on a similar mental journey—thinking about a counterfactual life path in which a positive event like meeting a future spouse never happened—ended up “a little bit happier” than those who simply thought about the positive event itself. The jolt of happiness, which they called the “George Bailey effect,” comes from being surprised that a good thing can and did happen to you.

When times are tough, it might seem frivolous to cultivate a belief in luck. But that belief, psychologists say, can cast a spell that heals our wounds and gives us another shot at success, whether we’ve survived a bombing or just been on a bad date.

Chelsea Wald is a regular contributor to Nautilus who lives in The Hague.