How Viruses May Have Led to Complex Life 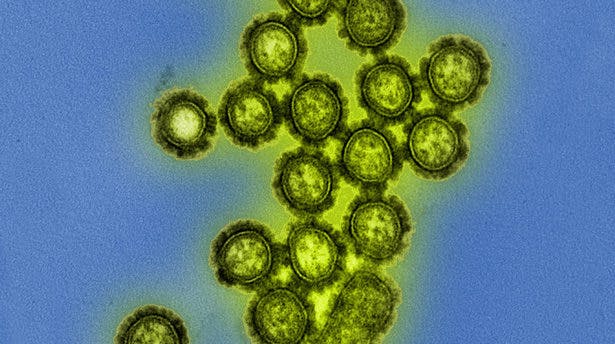 You wake up one morning achy, with fever, chills, a stuffy nose, and a cough. A virus has performed a hostile takeover of your cellular machinery to manufacture its own proteins and replicate itself. You’ve unwittingly become a miserable, sniffling virus factory.

But you aren’t part virus only when you’re infected with one. A growing body of evidence supports the idea that viruses played a role in one of the most significant complexity jumps in evolution: The transition from prokaryotes to eukaryotes. Prokaryotic organisms, which include bacteria and archaea, were among the earliest living things on Earth. Their simple cells do not have nuclei or other organelles like mitochondria. These complex structures are a feature of eukaryotic organisms, which include all plants, animals, and fungi.

Eukaryotes also have a higher percentage of intrinsically disordered proteins (IDPs) than prokaryotes. Unlike the highly structured proteins you may have learned about in high school biology, IDPs have stretches of amino acids that allow them to be more fluid. This fluidity in turn allows them to respond rapidly to many different kinds of cellular instructions.

In 2012, Keith Dunker of Indiana University and his colleagues looked for these telltale stretches of amino acids in databases of eukaryotic and prokaryotic proteomes. (A proteome is the entire set of proteins expressed by an organism’s genome.) They found what they called a “well-defined gap” between the percentages of IDPs found in prokaryotes and eukaryotes. The IDP content of prokaryotes never seemed to get past 28 percent; eukaryotes never seemed to stray below 32 percent. So where did the increase in IDPs come from? Dunker suggests viruses.

In that same study, he and his colleagues also looked at the percentages of IDPs in viral proteomes and found that they ranged from 7.3 to 77.3 percent of the proteome, depending on the virus. This overlaps with the percentages of both prokaryotes and eukaryotes, suggesting a possible bridge between the two cell types.

The standard explanation for the origin of complex life is that eukaryotes arose after one prokaryote swallowed another. The engulfed prokaryote then went on to become the first organelle. But that hypothesis doesn’t explain why eukaryotes have such high IDP percentages. Dunker and his colleagues argue that their findings support a different transition. Some viruses, like the giant mimivirus, have about the same percentage of disordered proteins as some eukaryotes. A bacterium could have engulfed a large-DNA virus in a process called viral eukaryogenesis, eventually yielding a nucleus that matches the high IDP percentages of eukaryotic cells.

Dunker said many scientists assume that when a virus and host have something in common, the virus picked it up from the host. But it could work the other way as well. When he looked for a possible explanation for the range of IDP percentages between eukaryotes, prokaryotes, and viruses, Dunker drew inspiration from Patrick Forterre of the Pasteur Institute in Paris, who has argued that it isn’t clear which way all traits flowed between viruses and their hosts.

“Viruses have this huge range of disorder, from low to high,” Dunker said. “The disorder may have evolved in the viral world for viral functions and then moved from the virus to the host. We just don’t know which way it went.”

So the next time you’re laid low with the flu, stewing in misery, remember that without viruses we might never have evolved our way out of the primordial soup.

For more on IDPs, read Alla Katsnelson’s article “The Shape-Shifting Army Inside Your Cells” on QuantaMagazine.org.