How We Remember Last Weekend

High-frequency oscillations that ripple through our brains may generate memory and conscious experience. 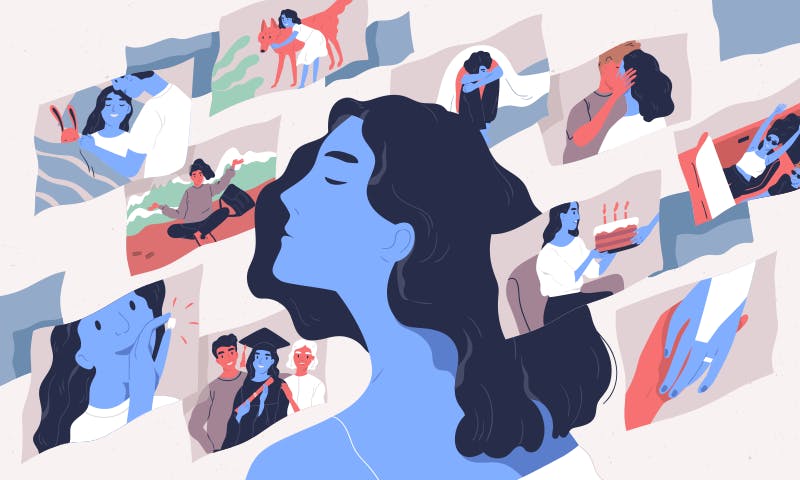 One of the most difficult questions for the science of memory deals with the most obvious fact about memories: We can, well, recollect them. The problem is that no one knows exactly how we call to mind, and with such ease, that party last weekend, with all the samba dancing and clinking of ice in glasses, the scent of circulating hors d’oeuvres, the jolt up the spine from catching a lover’s eye across a crowded room. All these emotional and sensory elements, we know, are registered in distinct areas of the brain—but how is it that we can reminisce and conjure them all up at once, recalling the mental event as a single experience?

A group of scientists based at the University of California, San Diego, have found a promising mechanism that may explain not just how recollection works, but also, more broadly, conscious experience itself.

In a recent paper published in the Proceedings of the National Academy of Sciences, lead author and neurophysiologist Charles Dickey identified patterns of ripples—brief high frequency oscillations in neural activity—that synchronize across the human brain during spontaneous waking and memory recall.1 These ripples fan out across distant areas of the cerebral cortex (the wrinkly surface of the brain) that are responsible for the sensory elements involved in any mental event, and extend to the hippocampus, a seahorse-shaped structure key to memory. Many studies had previously investigated ripples in the rat hippocampus and their relationship to memory, but Dickey only recently identified ripples in the human cortex.

There are several competing theories about networks of neuronal activity that may facilitate communication between different areas of the brain to give rise to conscious experience.2 But this may be the first observed mechanism that could potentially solve the so-called “soft problem” of consciousness—the quest to identify the physical processes in the brain that underpin mental events. The soft problem is in contrast to the so-called “hard problem” of consciousness, the question of how something physical like the brain can possibly generate the rich, clearly mental quality of lived experience.

“We have to solve the soft problem of consciousness first, and the hard problem doesn’t really impede that search,” said Eric Halgren, senior author of the paper and director of the UC San Diego lab where Dickey did his graduate research.

The difficulty behind the soft problem of consciousness is that there isn’t a readily identifiable locus of consciousness, though many possibilities have been proposed over the centuries. Rene Descartes, the 17th-century philosopher, thought the seat of consciousness was the pineal gland, a small gland in the center of the brain, but we now realize it’s probably responsible for producing and regulating melatonin for our sleep cycles instead. Two hundred years later a German physiologist named Johannes Müller suggested the medulla oblongata, the stem-like structure at the bottom of the brainstem, was responsible for consciousness. (We now know it’s chiefly responsible for involuntary functions like heartbeat, breathing, vomiting, and sneezing.)

This mechanism could solve the “soft problem” of consciousness.

Later, the English physiologist William B. Carpenter nominated the thalamus, a boot-shaped structure in the middle of the brain, as the hub of consciousness, and then celebrated biologist Francis Crick considered the claustrum, a neural structure that appears like a crown of thorns around the cortex. It turns out that both the claustrum and the thalamus may indeed play important roles in certain features of consciousness, but their candidacies as coordinating centers for consciousness remains largely conjectural.

The largest hurdle for the search for consciousness in the brain was somewhat inadvertently discovered by 20th-century neurosurgeon Wilder Penfield, who was treating patients with severe epilepsy by lesioning the malfunctioning areas of the brain that were instigating seizures. During his surgical procedures, Penfield noticed that certain movements or perceptions could be manufactured by stimulating different areas of the cortex; stimulation via an electrode on your forehead could produce the smell of a bandage, while one on the back of your head might make you see the Buddha and wiggle your pinky. This presented a problem of brain geography that is sometimes called “the binding problem”: How do distant areas—the ones involved in, say, the smell of bandages and the ones involved in the throbbing pain of the wound under the bandage—communicate with one another to produce a seamless experience? Enter brain ripples.

Brain ripples are so named because these high-frequency oscillations of neural activity appear as ripples on stereogram readouts of the cortex called electroencephalograms.

“The cortex is where we have all our sensory areas, so experiences are primarily a cortical phenomenon,” Dickey said. “The idea is that an experience happens, and this affects the firing of synapses between specific sets of sensory neurons, strengthening their connections.” He added, “Ripples may modulate this synaptic activity to consolidate the memory within the cortex.”

Ripples unify our experience by the moment, playing a memory like a song.

“What’s really interesting about brain ripples as a mechanism for studying consciousness and memory is that they’re primarily temporal,” Halgren said. Ripples emanate and multiply across the cortex spatially, but in the way that music fills a room. Ripples form fleeting but repeated patterns. They come and go like memories and experiences themselves.

While these specific kinds of human cortical brain ripples are newly discovered, the purely theoretical underpinnings of them have been around since the late 1970s. One popular theory of consciousness is known as “binding-through-synchrony,” which postulates that a synchronization of neural activity is what organizes different sensory cues from different regions of the cortex into coherent experience. The theory has been  around for decades, but evidence for it (beyond some experiments with the visual systems of cats) was limited.3 Brain ripples are the first observable and testable mechanism that could corroborate the binding-through-synchrony hypothesis.

What could this mean for consciousness and the study of the mind? The mechanism of brain ripples seems to suggest that consciousness may not have a center, or a fixed unifying organ controlling it. Instead, they suggest a decentralized consciousness, where frequencies accompany and hold our thoughts like ghostly electrical consorts, appearing and disappearing as quickly as they do. Instead of a single ghost in the machine, we may host an infinite number of ghosts, in the form of an incredible procession of ripples, unifying the entirety of our experience by the moment, playing a memory like a song, taking its notes from the distributed and diverse functions of our sensory apparatuses.

In the end, perhaps the search for consciousness was impeded for so long because we were searching for the wrong kind of thing, something physical or structural rather than phenomenal—a pineal gland instead of an electric signature, a neuro-chemical ghost that pulses across the cortex.

The real test for whether brain ripples underpin conscious experience might include cortical stimulation experiments in humans to test if certain kinds of experiences can be induced by ripples (or, conversely, if conscious experiences can be interrupted by disrupting cortical ripples). If further research concludes that ripples do in fact coordinate the communication of all the different parts of the brain responsible for an experience of, say, a beach in August (with its hot sand everywhere, the blazing sun and cooling ocean, and drying off while waves whoosh nearby), then Dickey’s study could be an immense step forward for solving the soft problem of consciousness.

Marco Altamirano is a writer based in New Orleans and the author of Time, Technology, and Environment: An Essay on the Philosophy of Nature. Follow him on Twitter @marcosien and Instagram @cocomarquito.