The new volcanic fissures are more otherworldly than they first appear. 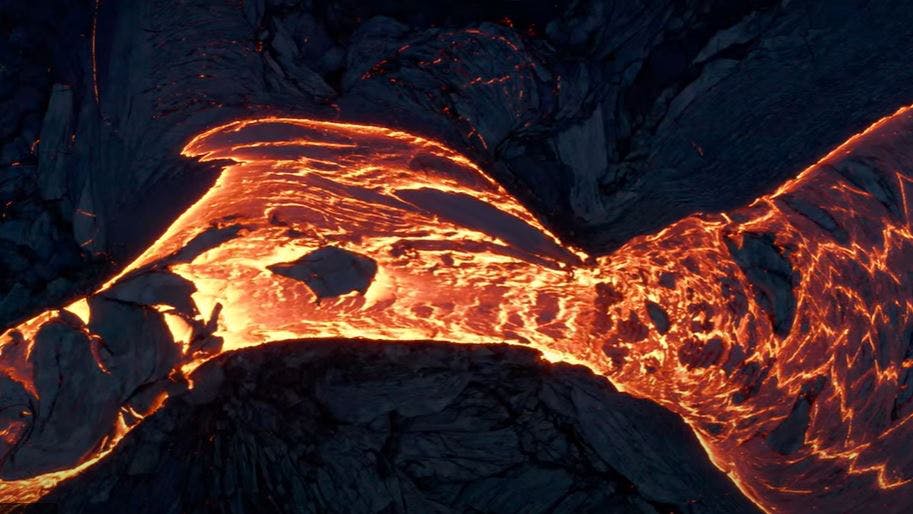 After 15 months of increasingly intense and disruptive earthquakes on Iceland’s Reykjanes Peninsula, the region finally let off some pressure. On March 19, 2021 lava roared out of the ground in the uninhabited valley of Geldingadalur, marking the first time in 800 years that this southwesterly strip of land has been rocked by an eruption.

Volcanologists are thrilled, but this spectacle isn’t just an opportunity to explore Iceland’s fiery underworld. It’s also a window into another world entirely. “The eruption is, in my view, a fantastic analogue for Mars,” said Christopher Hamilton, a planetary scientist at the University of Arizona.

Mars is an unquestionably volcanic planet. In its earliest eras, it built volcanoes so immense that their formation deformed its surface. At one point, they caused the entire planet to tip over by 20 degrees. Its volcanic output gradually slowed, but Mars continued to make small volcanoes and spill lava for most of its lifetime. It may even be volcanically active today, with magma still gurgling below ground, perhaps gearing up for a future eruption.

Yet little is concretely understood about the origins, evolution and behavior of Mars’ volcanism, which is one reason why researchers are excited to use the Geldingadalur eruption as an analogue.

Over the course of Martian history, as giant volcanic provinces formed and the world cooled and shrank, parts of its surface were squashed together while others were pulled apart. And in places where the crust split, Martian magma erupted out of fissures.

The Geldingadalur eruption also began along a fissure. Lava has been bubbling out of an oddly shaped cone at a steady rate for the past two weeks, slowly filling up the valley. As is typical for this sort of eruption, both on Earth and Mars, a second fissure—perhaps one of many to come—opened up just north of the first on April 5, 2021 creating its own fountains and rivers of lava.

This pint-size paroxysm was made possible by the peninsula’s location: It sits atop the Mid-Atlantic Ridge, the volcanic rift that pushes the Americas away from Europe and Africa. This tectonic divorce normally happens at the rate your toenails grow, but the furious tectonic temblors preceding the eruption suggest that it gained a temporary speed boost, allowing magma to make incursions into the new vacancies within the shallow crust.

If the conduit to the magma below remains open, the Geldingadalur eruption could end up building a small shield volcano, an extremely broad magmatic mound with a very low-angle slope. Such an edifice would be comparable to those found all over Mars, said Hamilton, which means this eruption could allow scientists to watch one grow on Earth in real time.

In another similarity to Mars, the eruption involves basalt, a magma with a honeylike viscosity. Basalt is common to plenty of volcanoes, but the Geldingadalur eruption’s magma has an especially runny consistency. Its magma is coming up straight from the mantle and speeding right through the crust. It “didn’t really stall too much on its way to the surface,” said Tracy Gregg, a planetary volcanologist at the University at Buffalo. “It formed, and then it had places to go and things to do.”

Martian eruptions often involved an exceedingly fluid version of basalt, suggesting that its volcanoes may sometimes have had Icelandic-style plumbing.

But perhaps the most exciting correlation between Mars and Iceland is how their volcanic activity may influence biology.

Mars had a lot of eruptions where magma met ice. And if you’re interested in what happens when magma meets ice, Iceland is the place to be. “Iceland is an incredible place and one of the best analogues for Mars we have on Earth,” said Arola Moreras Marti, a researcher at the University of St. Andrews who studies biosignatures on Mars.

Iceland’s expansive Vatnajökull glacier, for example, sits atop various volcanoes. Magma inside these volcanoes powers hot hydrothermal pools at the surface, where Moreras Marti goes looking for microbial life. “In them you find microbes,” she said, “the most insane microbes.”

As magma from the Geldingadalur eruption meets groundwater, it sets up new hydrothermal pools at the surface as well as blisteringly hot ponds and streams underground. This happened all the time in Mars’ past—it may even be happening now—when magma cooked rocks and released hydrogen, carbon dioxide, methane, iron, sulfates and other compounds that microbes can use to sustain themselves. These sorts of compounds are also being transported around Geldingadalur’s soggy subsurface, setting up chemical imbalances that microbes thrive on.

Magma may be profoundly lethal to us, but the microbes under Geldingadalur are “probably loving it,” said Moreras Marti.

The Martian surface has long been an irradiated desert unsuitable for life. But what is happening at Geldingadalur today happened, and may still be happening, on Mars. At any point during the past 4.5 billion years, whenever hot rock met water, underground hydrothermal networks would crop up. Being shielded from the deadly radiation bombarding its surface, these subsurface hideaways would be relatively habitable environments.

Mars was also considerably wetter when it was young, with a thicker radiation-blocking atmosphere. Long ago, microbes could have existed on the surface.

There, they would have been periodically cooked by sterilizing lava flows, which is exactly what’s happening at Geldingadalur today. The lava is killing off preexisting microbial life in the soil. Over the coming months and years, a brand-new ecosystem will rise out of the ashes of the old.

That’s one of the reasons why Hamilton is there. When signs pointed toward an upcoming eruption on the peninsula, Hamilton and his colleagues sprang into action. “As soon as we saw the first earthquake swarms, we basically went out sampling all of the different areas to get an idea of what the baseline microbial ecology would be,” he said.

Hamilton and others will continue to take microbial samples from the soil and also from the air, as invading microbes may prefer gliding in as opposed to swimming. (Samples may need to be taken from people’s boots too, said Hamilton, to try and spot any stowaways—a distinctly earthly, not Martian, issue.)

Scientists will also sample the lava itself. Mere weeks after Iceland’s Eyjafjallajökull eruption in 2010, scientists found not only that microbes had colonized the surrounding soil, but that they were living on the new lava flows themselves. “The lava was still hot,” said Mario Toubes-Rodrigo, a microbiologist at the Open University, who explained that the visiting scientists had to be extremely careful. “I think a couple of their boots also melted.”

But perhaps most important, the researchers will be able to trace the evolution of underground ecologies from the very moment a new habitat appears. That makes the subsurface shenanigans at Geldingadalur a rare and nearly ideal biological simulacrum of what may have once happened, or may still be happening, on Mars.

The eruption could fizzle out in the coming days or weeks. Conversely, it could keep erupting for years, perhaps decades, much like the 35-year Pu‘u ‘Ō‘ō eruption on the flanks of Hawai‘i’s Kīlauea volcano. If so, this site will become a draw for planetary scientists and astrobiologists alike: a long-lived, safe and easily accessible natural laboratory in which to better understand two planets for the price of one eruption.

There is one critical difference, however: the scale of the events. Mars’ lava flows were jaw-droppingly prolific, often producing enough lava to bury a landmass the size of the United Kingdom in a matter of weeks. That makes the Geldingadalur eruption a “model-scale lava field,” said Tobias Dürig, a volcanologist at the University of Iceland. It’s a Martian eruption in miniature.

All things considered, that’s probably for the best.

Video: Volcanic eruptions are intimately connected with life. Scientists are using the current eruptions in Iceland to understand the possible history of life on Mars. Credit: Emily Buder/Quanta Magazine