If You Can’t Find Dark Matter, Look First for a Dark Force

Physicists are rethinking how to use the Large Hadron Collider to search for dark matter. 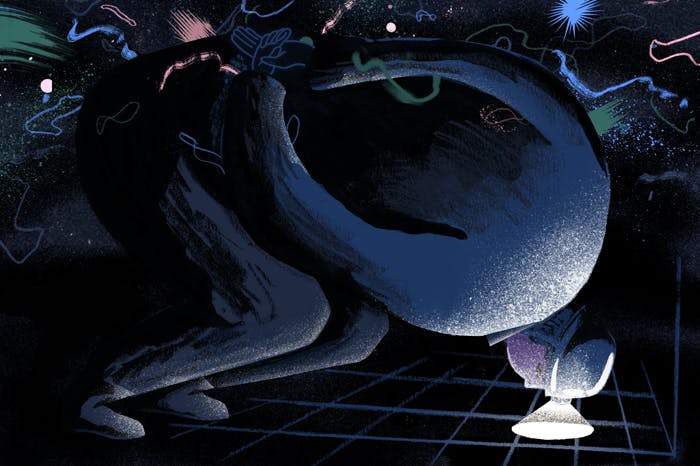 While cosmologists may be fascinated by what dark matter does, particle physicists are fascinated by what dark matter is. For us, dark matter should be—naturally—a particle, albeit one that is still lurking hidden in our data. For the last few decades, we’ve had a tantalizing guess as to what this particle might be—namely, the lightest of a new class of supersymmetric particles. Supersymmetry is an extension to the Standard Model of particles and forces that nicely addresses lingering questions about the stability of the mass of the Higgs boson, the unification of the forces, and the particle nature of dark matter. In fact, supersymmetry predicts a vast number of new particles—one for each particle we already know about. Yet while one of those new particles could constitute dark matter, to many of us that would be just a happy byproduct.

But after analyzing data from the first (2010–2012) and second (2015–2018) runs of the Large Hadron Collider (LHC), we haven’t found supersymmetric particles yet—indeed, no new particles at all, beyond the Higgs boson. So, while we continue to hunt for supersymmetry, we’re also taking a fresh look at what our cosmology colleagues can tell us about dark matter. It is the strongest experimental evidence for new physics beyond the Standard Model, after all.

In fact, some might say that a principal goal of the LHC and future colliders will be to create and study dark matter. For that to happen, there must be a means for the visible universe and the dark universe to communicate with each other. In other words, the constituents of the particles that we collide must be capable of interacting with the putative dark-matter particles via fundamental forces. A force requires a force carrier, or boson. The electromagnetic force is carried by the photon, the weak nuclear force by so-called vector bosons, and so on. Interactions between dark matter and normal matter should be no different: They could happen by exchanging dark bosons.

Even if our detectors are oblivious to the dark bosons themselves, we have some hope of identifying them if they have some tiny interaction with observable particles—in other words, if they are not completely dark. Given how feeble these interactions would be, the Large Hadron Collider could already be producing these particles and we simply haven’t been able to notice them yet.

After being created in the LHC when two protons collide, a dark boson might decay into dark-matter particles, which would escape our detectors without leaving a trace. But we could deduce their presence by adding up all the particles we did observe and looking for an imbalance of momentum, indicating that something had gone missing. Alternatively, dark bosons could decay into ordinary particles, such as quarks, and leave clear patterns in our data. We could do some particle forensics to infer the properties of the unseen bosons. This is just the sort of job for which the LHC detectors were designed, and we are continually scouring our collider data for these signals.

In doing dark boson searches this way, though, we have made one assumption that might not be warranted: that the dark boson decays instantaneously. What if it doesn’t? The dark universe, in order to be dark, has to be sequestered from the normal universe in some way. This can cause dark bosons to survive for a short—but measurable—moment before disintegrating back into normal matter. The debris of the disintegration would not show up in our experiments at the point where the two protons collided, but displaced by some significant distance.

The LHC experiments were designed to look for particles originating from the interaction point. Tracing the trajectories of long-lived particles (dark or not) is complicated by several factors. They would be composed of fewer measurements, making it harder to connect the dots; they would follow atypical geometric paths, further hampering our pattern-recognition algorithms; and they could produce signals that would arrive much later than the usual algorithms anticipate.

But this is just the kind of challenge physicists embrace. By reviving decades-old tricks and inventing brand new methods, we have modified our algorithms to be sensitive to these atypical particle patterns. We think we can now detect dark bosons that decay up to several meters away from the place of origin, which covers most plausible scenarios. It almost doesn’t even matter what the dark boson decays into, as long as particles of normal matter, which our detectors will register, end up in the debris.

So far, we have found nothing in the data from the first, low-energy run of the LHC. But we are still working on data from the second, higher-energy run. With the addition of these techniques to the supersymmetric searches that have come before it, we now have an excellent chance to discover dark matter, a dark force, or both. Considering that it has so far delivered only 1 percent of the total amount of data it will ultimately produce, the LHC’s search for dark particles has really only just begun.