T-cells identify what belongs in the body by timing how long they can bind to it. 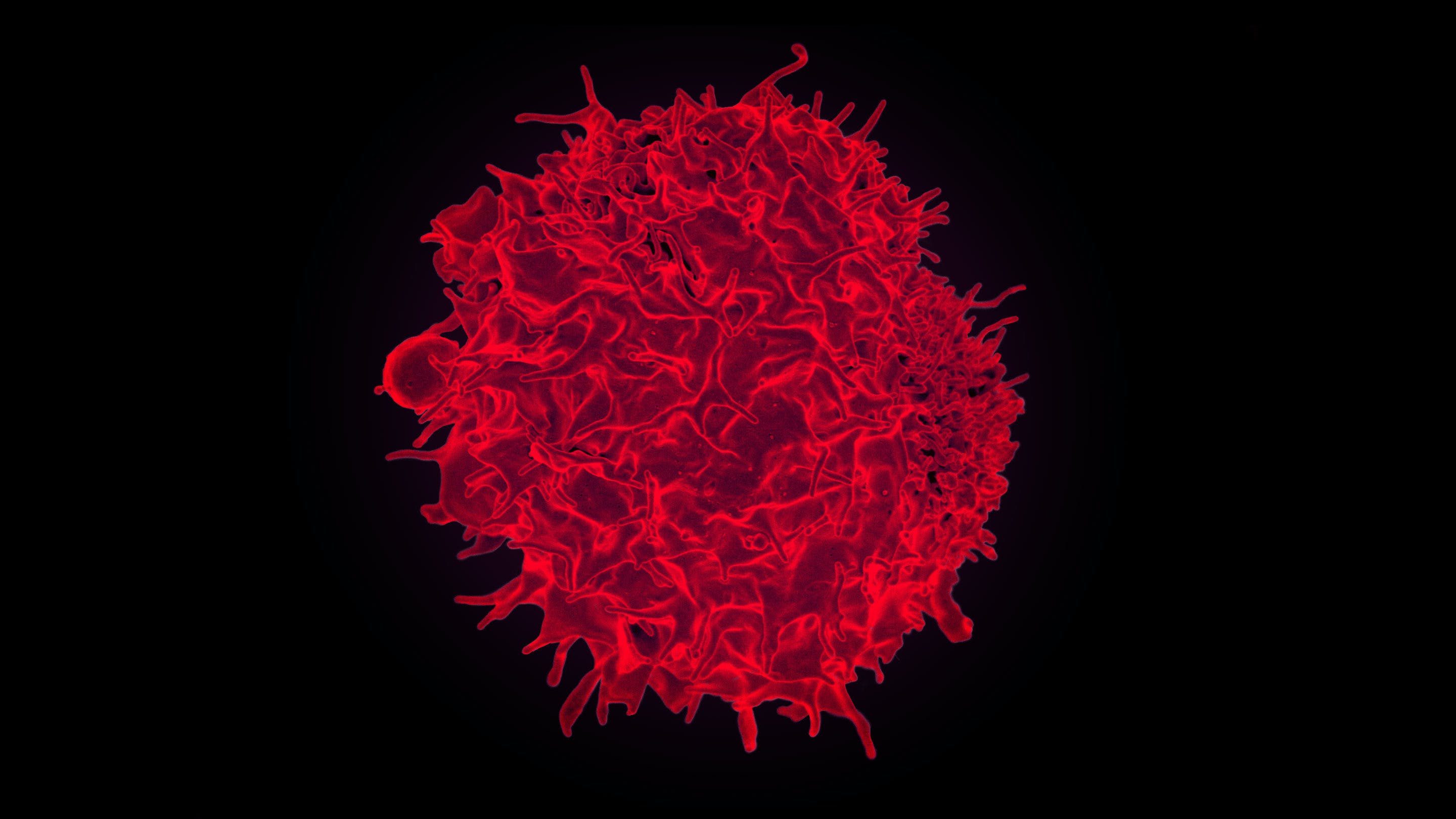 To mount a successful defense against invading organisms, the immune system must quickly and accurately identify which cells belong in the body and which do not. That might seem straightforward enough, but it’s not such an easy feat to achieve. The responsibility falls largely on the shoulders of T-cells, white blood cells with specialized receptors embedded in their surface that allow them to bind uniquely to diverse peptide fragments. Once bound, the T-cells can then initiate a focused attack against the target.

“It’s an amazing needle in a haystack that they’re trying to identify,” said Orion Weiner, a biochemist at the University of California, San Francisco. “Being able to find that incredibly rare [foreign] peptide in a sea of quite similar self-peptides is an amazing challenge. It requires a degree of both specificity and sensitivity that’s really at the limits of what’s physically possible.”

But there’s a problem: During development, millions of T-cells with distinctive receptors are produced randomly—the immune system’s way of covering all its bases, of preparing for the astronomical diversity of peptides it might encounter. Many of those peptides, however, are inevitably parts of proteins that belong in the body. While most of the T-cells that react to such “self” molecules are eliminated as development progresses, some of them continue to circulate throughout life, protecting against infected and abnormal cells without harming the body. Something keeps them in check.

Now, researchers seem prepared to hand down a definitive answer. A pair of studies, published in eLife in April, have experimentally confirmed a theory that has enjoyed growing support since the 1990s. The key lies in the timing of things: Substances that bind to T-cell receptors for less than about five seconds are deemed safe, while longer-binding molecules are slated to be destroyed. “The cell could have some way of taking very, very tiny differences in the duration of the receptor binding,” said Weiner, an author of one of the papers, “and amplifying that to a much larger cellular response.”

The Theory of Kinetic Proofreading

That theory, known as kinetic proofreading, got its start (and its name) a few decades earlier. It explains how ribosomes build protein chains out of the correct sequences of amino acids: Each amino acid gets added to the chain only if the cellular machinery involved stays bound for enough time. Scientists have been able to figure out fully all the steps of that time-based proofreading process.

But the T-cell version of kinetic proofreading was not so well understood. There had been no way to know with certainty that’s what was happening: Tests of the hypothesis found suggestive correlations between binding time and the activation of T-cells, exactly as kinetic proofreading would have it, but these testing methods could not disentangle the effect of timing from the effects of other biophysical factors, such as structural changes in the molecules and differences in binding strength. Worse, researchers knew that there were many potentially important parameters at play that they couldn’t measure or hadn’t even considered.

Until now, that is. Two teams—one led by Weiner in San Francisco, the other by Wolfgang Schamel, an immunologist at the University of Freiburg in Germany—independently provided solid proof using a new engineered system.

Both groups turned to optogenetics, a field of research that uses light to control cells. Usually, it involves stimulating or silencing neurons that have been genetically engineered to be sensitive to light, but in the past decade, “there’s also been this growth of what I’d call cellular optogenetics, where people are using proteins that respond to light to do all kinds of other things, like controlling protein-protein interactions,” said Chandra Tucker, a biologist at the University of Colorado School of Medicine, who did not participate in either of the studies.

The new work applied optogenetics to T-cells for the first time—and to the surface of the cells, rather than to a process within them. Schamel and his colleagues took advantage of a particular pair of plant proteins that bind to each other only while exposed to light. They engineered a T-cell receptor to display one of these proteins, and used the other as its binding target. By shining light on the cells, they could regulate precisely how long the T-cell receptor was bound, which finally gave them the selective control over binding duration that had eluded researchers for so long. (This achievement alone proved arduous: It took several years of trial and error, educated guesses and experimentation, along with specialized equipment, to get the system to work.)

“I was excited when I saw that,” said Jay Groves, a chemist at the University of California, Berkeley, who was not involved in either study. “I thought, wow, that could really become powerful.”

Weiner and one of his graduate students, Doug Tischer, used a different pair of light-sensitive plant proteins and a stripped-down T-cell receptor rather than a natural one. Various other aspects of their methodology also differed from Schamel’s, but in both cases, all parameters other than the duration of the binding were held constant.

And strikingly, both teams got the same results: When a binding event lasted for more than around five seconds, the T-cell became active, but it failed to do so for anything less than that. “In some ways,” Groves said, “the whole T-cell receptor signaling network is like a little chemical computer that’s measuring binding times, and it’s also a single-molecule sensor on top of all this.”

This process works because the immune system undergoes a sort of training period during its early development: Nascent T-cells are presented with all the self molecules in the body, and cells that bind for more than five seconds to anything get weeded out. That way, the T-cells left to make up the body’s immune system are those that bind for a long time only with things they’ve never seen before.

How the cells measure the length of a binding event is still unknown, but experts have sketched out an idea of what most likely happens: From the moment a T-cell receptor binds to a molecule, a number of irreversible biochemical steps have to take place before the cell will activate. If the molecule detaches too early during this signaling cascade, everything has to start over from step one. Researchers, including Weiner, Schamel and Groves, are still trying to figure out what those intermediate steps are, and how each of those steps contributes to the T-cell’s ability to keep track of binding time.

But Tischer and Weiner’s simplified T-cell experiment provided a preliminary, and surprising, hint: The clock doesn’t seem to start immediately after the target molecule binds to the T-cell receptor; rather, there is some kind of undetermined hiatus.

This still needs to be confirmed in a natural T-cell system, and some researchers have their doubts (Groves, for one, thinks that multiple levels of the signaling cascade track the binding time, and that the receptor contributes to that). Still, if true, “it would be very strange,” said Schamel, who is also not yet fully convinced. “It’s a very puzzling and unexpected result, because you would have always thought that time would start counting with the first event, when the [molecule] binds. But no, time seems to start counting later.”

Weiner added, “The step we thought was the most likely [for kinetic proofreading] appears not to be the critical one.” Rather, steps that take place further down the line, and that are less directly connected to what’s going on at the binding site, seem to be involved. To him this indicates that “discriminating self from non-self is a property of the more extended signaling network … and [raises] the very interesting question of exactly what the receptor is contributing to this process.”

Of course, there’s still a great deal left to unearth about exactly how T-cells get activated. In a paper recently published in Science, Groves and his colleagues filled in some of the mechanistic blanks. Ronald Germain, an immunologist at the National Institutes of Health in Maryland, pointed out that Schamel and Weiner’s work also has to be integrated with ongoing research on particular kinds of interactions that are related to binding time as well.

Going forward, the researchers think their experimental approach can help to unpack the role of molecular kinetics in a variety of processes, from the regulation of cell shape to gene expression. It might also inform potential immunotherapies, and illuminate the mechanisms underlying disorders in which the immune system either turns against the body’s own cells or fails to respond to actual invaders.

“It’s exciting,” Groves said. “There’s still a long way to go with this, but it’s a great step in a very interesting direction.”

Lead image: The white blood cells called T-lymphocytes, such as this one shown by scanning electron microscopy, have receptors that bind to specific molecular targets. New work shows that the duration of this binding is what allows the cells to distinguish between the body’s own proteins and those of invading pathogens. Credit: NIAID