In the Partnership of Octopus and Fish, a Marvelous Sign of Resilience

It’s not just physical adaptations that allow creatures to survive the challenges of a warming planet. It’s learning, too. 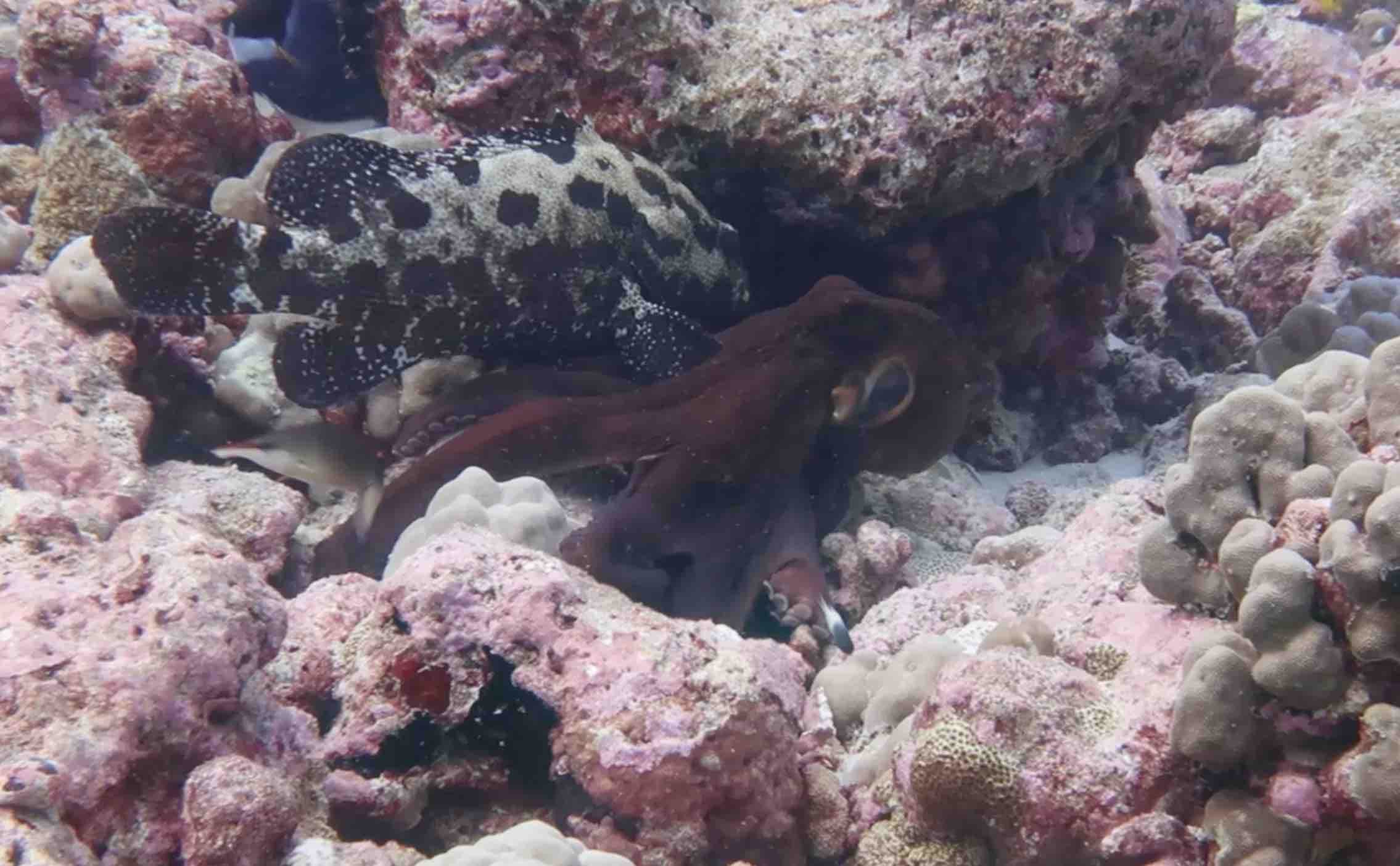 Again the octopus’s skin mottles, and then again, the second time not much resembling the grouper’s patterns but rather a constellation of lights. The octopus swims to the boulder’s far side and makes a barrier with tentacles now spread flat and turned white. The grouper dives into the hollow, looking for fish whose escape routes have been blocked. Never mind the 500-million-year wide taxonomic gulf that separates them. Hunger, opportunity, and smarts cross that divide easily, hinting at adaptations that could help these unlikely partners navigate lean years ahead and providing an interspecies union to tickle human imaginations.

“Crossing a phylum gap like this is almost like a human talking to a snail,” says Daniel Bayley, a marine biologist at University College London. “It’s amazing to watch.” Bayley and Amelia Rose of Oxford University observed octopuses working with brown-marbled grouper—and with peacock grouper and gold-saddle goatfish, too—in sunlit shallows off atolls in the northern Chagos Archipelago, a remote chain of islands in the Indian Ocean. The incidents caught their attention: while multispecies associations are not uncommon in the animal kingdom, it’s unusual to see such them between such different creatures. What’s more, this was a true collaboration.

That octopuses would be involved is likely no surprise for people attuned to a cephalopod-celebrating zeitgeist inspired by books like Sy Montgomery’s best-selling The Soul of an Octopus and the wildly popular documentary My Octopus Teacher, which showed marvelous behaviors that had yet to be described scientifically: an octopus camouflaging herself with seashells, or playing with schools of fish. Popular footage likewise preceded description with  octopus-grouper unions featured in the Blue Planet II television series and in a handful of YouTube videos. In the Chagos Archipelago, though, Bayley and Rose had the chance to observe the collaborations in detail.

Asked to review the footage, Culum Brown, a behavioral ecologist at Maquarie University who specializes in fish intelligence, said “they are clearly communicating with one another.” Brown, who agrees that the hunts are planned, is curious how about how they’re initiated. Do octopuses give the go-ahead? Or fish? And how are partners chosen? Brown pointed to research on groupers cooperating with moray eels to hunt. Those fish select the most competent eels, demonstrating a collaborative sophistication once thought limited to humans and certain primates. He also noted that, while octopuses seemed to take the lead, the collaborations seen by Bayley and Rose demand quite a bit of intelligence from the fish as well.

“If you think about it, that’s like us speaking to fish.”

Another fascinating question, he said, is how knowledge spreads of hunting strategies and mutually-understood signals. Perhaps each participating octopus and fish works it out for themselves, through trial and error—or perhaps, following an initial breakthrough, knowledge spreads by observation or even active teaching. That would make it a cultural adaptation, a matter of accumulating knowledge passed between generations, an example of species surviving in a fast-changing world not because of some fortunate genetic mutation but because they are learning. This also suggests a potentially key role for grouper. Unlike day octopuses, who reach a ripe old age at 15 months, brown-marbled and peacock grouper can easily live 40 years or longer. They may be a living library for their short-lived partners.

Research by Daniel Bayley was funded by the BERTARELLI FOUNDATION. You can find out more about its marine science programme at www.marine.science