Is Coloring Within the Lines the New Meditation? 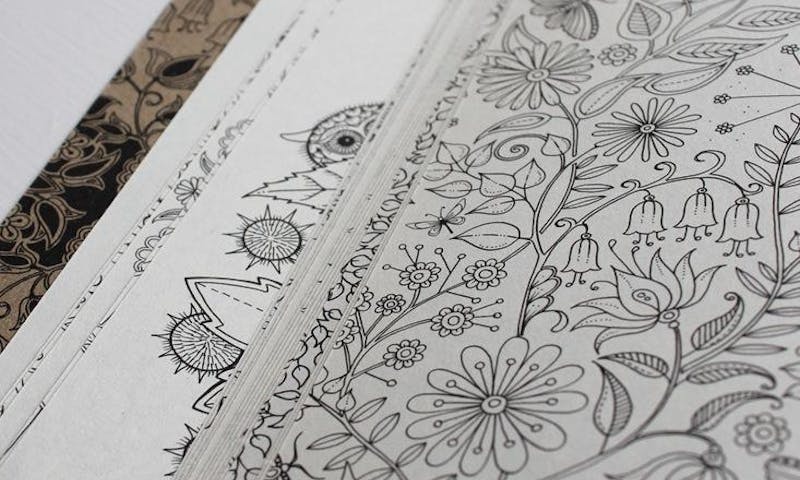 I sit motionless on the hardwood floor. My legs are crossed in a full lotus position and the back of my hands rest on top of my knees with my pointer fingers pressed slightly against my thumbs. My posture reflects the small Buddha statue in front of me. And together, our shadows dance on the distant wall, caused by the flickering light of a small candle.

So begins my nightly meditation. But that moment of pure bliss, where the slightest smile can be traced on my lips, never comes.

It fees like it’s 100 degrees in my apartment. Sirens keep rolling past, together with red and blue lights splashed against my closed eyes. My lower back is screaming in pain. My left leg is already fast asleep. My breathing is shallow. And worst of all: My mind is in full flux. I can’t help but think about that impending deadline at work. It’s anything but calming. In retrospect, I could just chalk it up to a bad night. They happen. But there’s a new trend emerging that just might solve my dilemma: coloring books.

Without a doubt, adult coloring is surging in popularity. I ordered Joanna Basford’s bestselling The Secret Garden and waited months for its arrival. And it isn’t just a one-off. Right now, four of the top 10 titles on Amazon are adult coloring books. So where did this new trend come from?

Clinical Psychologist Kimberly Wulfert sees coloring books as a third wave, following two related trends: journaling and activity books. Like the previous two adult-relaxation trends, coloring can be done in secret. It can be totally private, and Wulfert thinks that in this public world that can be part of its allure. “It’s something that’s just so adaptable to today’s society and so unintimidating that I think for all of those reasons it’s a soft place for people to rest their weary minds,” says Wulfert.

Still, that isn’t the entire story.

MRI scans even show that after an eight-week course of mindfulness meditation, the brain’s amygdala—that “fight or flight” center—appears to shrink.

Sixteen months ago, Lucy Fyles, 24, began to suffer from an anxiety disorder. She quickly became housebound and her early career virtually ended. Today, just about anything can trigger a panic attack from the simple tasks of needing to make a phone call to heading outside. But she has found comfort in coloring.

In the middle of a panic attack, Fyles is terrified. “So in that situation I can’t focus enough to color,” says Fyles. “I wouldn’t be able to pick a color. I wouldn’t be able to pick a book.” But if she recognizes the early symptoms of an attack in time, she will settle into a coloring book. And within 15 minutes or so she’ll feel much calmer. To boot, Fyles thinks that coloring books have helped with her condition overall. “I definitely have a lower level of day-to-day anxiety than I did,” says Fyles. Today she colors every day and has completed over 20 coloring books since her diagnosis just a year and a half ago. She even runs a blog where she reviews coloring books in order to help others who struggle with a mental illness.

When I asked Fyles why she thought coloring has helped her so much, her reply was simple: Coloring calms down the thoughts in her head. It feeds into meditation. “I really struggle with meditation, so for people like me, it’s a really good first step because you’re not just alone with your thoughts,” she says. “You are doing something and trying to calm down instead of just doing the calming down bit, which takes a lot of practice.” Her voice definitely resonated with my reflection from last night’s meditation.

Wulfert, for her part, doesn’t see coloring as a step toward meditation, but a form of meditation itself. When you’re coloring, you focus on the way your pencil collides with the paper. And you can ask yourself questions like: “How does your arm feel?” says Wulfert. “How does your body feel? Do you hold tension in your shoulders when you’re doing this? What’s your posture?” Not only are you able to be fully engaged in the moment, but you’re also able to focus on a single repetitive movement. And that is arguably a form of movement meditation.

Although the effects of adult coloring have yet to be looked at in a rigorous scientific study, long-term meditation practice is known to help manage anxiety, depression, and chronic pain. It’s associated with a variety of structural changes in the brain. MRI scans even show that after an eight-week course of mindfulness meditation, the brain’s amygdala—that “fight or flight” center—appears to shrink. And as the amygdala shrinks, the pre-frontal cortex—associated with higher order brain functions like focusing—becomes thicker.

Of course in order for coloring to truly be a movement meditation, you have to color every day without distractions. So with that in mind, maybe my meditation is in for some changes: Tonight it’s going to include choosing shades of blue and green and then savoring that moment where my colored pencil first collides with the white paper.