Math of the Penguins

Emperor penguins display rigorously geometric spacing and mathematical efficiency when they huddle together for warmth, which may reveal secrets to their overall health. 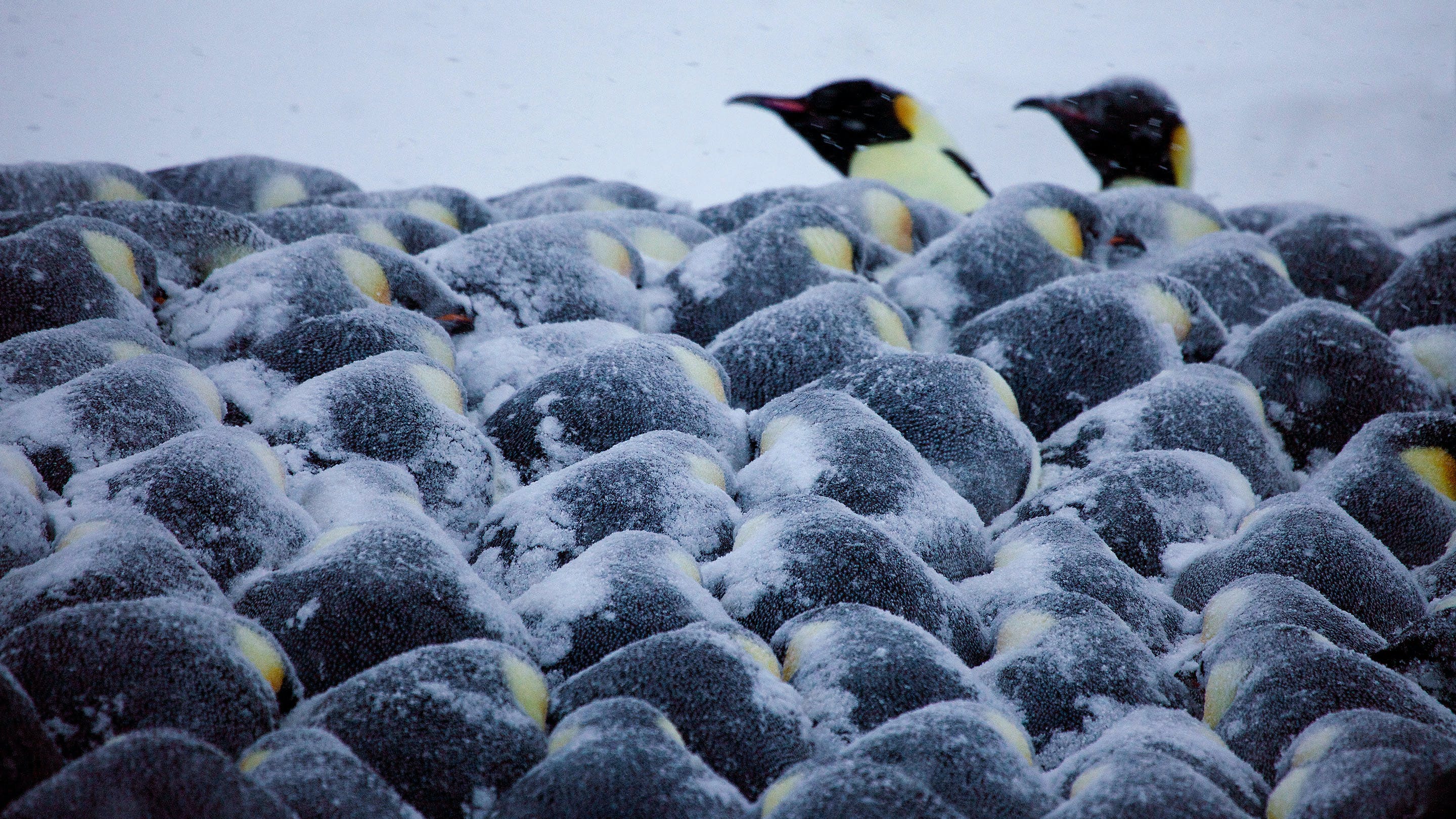 “A penguin huddle looks like organized chaos,” said François Blanchette, a  mathematician at the University of California, Merced. “Every penguin acts individually, but the end result is an equitable heat distribution for the whole community.”

It turns out that penguins execute their huddles with a high degree of mathematical efficiency, as Blanchette and his team discovered. More recently, Daniel Zitterbart, a physicist at Woods Hole Oceanographic Institution, helped develop and install high-resolution cameras to observe undisturbed huddling behavior. Zitterbart’s team recently discovered which conditions cause penguins to huddle, and they are investigating the possibility that the penguins’ mathematical behavior may reveal secrets about colony health over time.

At the bottom of the world, hundreds of thousands of emperor penguins emerge from the sea each April to trek over 50 miles to their inland colonies. After breeding, the females return to the sea for food and the males stay behind, each incubating a solitary egg in a pouch above their feet. Without nests or food, they brave the elements by huddling together on stable pack ice to maximize ambient heat and minimize exposure.

Though dominant winds can appear to push a huddle along the ice, the truth is more nuanced. Blanchette and his team’s model made clear that the birds do not move in unison. Penguins in the huddle’s center, where temperatures reach a sweltering 100 degrees Fahrenheit, mostly stand still. A bird who finds himself on the huddle’s windward side is soon driven to relocate to its warmer, leeward side. As more birds leave the windward side, penguins in the center soon find themselves exposed. In due course, these penguins also depart for the leeward side.

Huddles typically last a few hours, during which the penguins may cycle through multiple rotations from the huddle’s cold exterior to its warm interior. In the process, each individual prioritizes his own warmth, yet the huddle’s heat is shared by all.

Penguins seem to know what mathematicians learned long ago: The densest packing of shapes on a plane is a hexagonal grid. According to Blanchette’s model, the birds arrange themselves as if they were each standing on their own hexagon in a grid. Most huddles start off as misshapen blobs. Wind flow and temperature around the huddle prompt a first penguin—typically the coldest on the windward side—to relocate. This penguin, known as the mover, waddles in search of new neighbors in the relative warmth of the huddle’s leeward side.

The mover selects the leeward-side boundary penguins with the least heat loss as his new neighbors, assuming his new spot without disturbing others. (He may or may not choose a spot that maximizes his new number of neighbors—in this model, all that matters to him is finding the penguins with the least heat loss.) As he settles in, one or more of his new neighbors may now be situated in the huddle’s interior, without ever having moved. Meanwhile, on the windward side, the mover may have exposed a formerly interior penguin to the boundary by leaving his old spot vacant.

As more penguins embark on heat-seeking missions, the huddle’s boundary is in constant flux. Over time, rough shapes in the huddle become defined. The original blob transforms into a regular geometric object: an oblong shape with straight sides and rounded ends.

Without knowing it, the birds have stumbled into an almost perfect arrangement. “We tried to think of a better way [penguins could huddle], but it always involved an omniscient being who would tell them where to go,” Blanchette said.

But what prompts penguins to huddle in the first place? To investigate, Zitterbart’s team designed and installed a robust, remote-controlled observatory in Atka Bay and developed a software package that helps them interpret the data. Work from this observatory supplements observations by on-site researchers and has allowed Zitterbart’s team to develop mathematical models that accurately forecast penguin huddles.

“For us, the relevant part is, ‘How is the penguin feeling?’ because how the penguin is feeling dictates how the penguin behaves. And we measure behavior,” Zitterbart said. To do this, his team developed a notion of “apparent temperature,” which reflects how ambient temperature, humidity, wind speed and solar radiation affect a penguin’s perception of the temperature—a concept analogous to wind chill factor for humans. They also had to take into account how far into the breeding cycle the penguins were, since earlier in the cycle the birds are plumper from recent foraging, which allows them to start huddling at relatively colder temperatures. Toward the end of the cycle, the birds are scrawnier, their fat stores depleted over the months of cold, so they tend to start huddling at warmer temperatures.

Zitterbart’s team has gathered enough data to make increasingly precise predictions based on all these factors. For example, depending on the point in the breeding cycle, they might forecast an apparent temperature of −44.5 degrees Fahrenheit as the tipping point where penguins will have a 50% chance of huddling—meaning that, at this temperature, the birds are expected to transition from a loose configuration to a dense huddle.

Zitterbart believes penguin huddles are so mathematically precise that the apparent temperature at which they transition into a huddle serves as an indirect measure of the penguins’ average fat content and energy reserves.

“Instead of weighing each individual penguin, it’s as if we’re weighing 25,000 penguins at the same time,” he said.

His team is now working to determine whether the initial huddling temperature also reveals changes in colony health over time. Birds that have access to stable food quantities over many years should arrive at their annual breeding grounds with the same energy reserves and fat insulation every year. Therefore, the apparent temperature at which they huddle (depending on the point in the breeding cycle) should also be consistent over time. This offers a powerful observational tool. Zitterbart offers a hypothetical: If the penguins ever begin huddling at higher-than-expected apparent temperatures, it could mean that an altered food supply or climate change has negatively impacted their foraging success.

“All we’d need to do is take pictures of huddling penguins, which, compared to taking a research vessel and driving around and fishing, would be much less money,” Zitterbart said. “We have a decade of data we’re trying to work through to get this information out. This is an area of active science.”