Reina Maruyama wasn’t expecting her particle detector to work buried deep in ice. She was wrong. 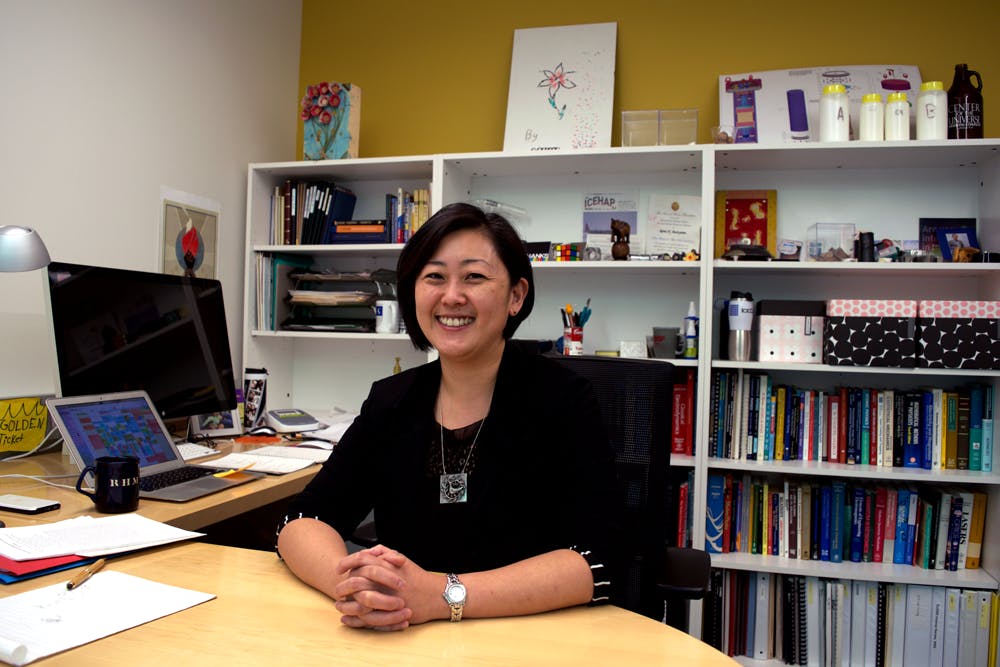 In the late 1990s, a team of physicists at the Laboratori Nazionali del Gran Sasso in Italy began collecting data for DAMA/LIBRA, an experiment investigating the presence of dark matter particles. The scientists used a scintillation detector to spot the weakly interactive massive particles, known as WIMPs, thought to constitute dark matter. They reported seeing an annual modulation in the number of “hits” that the detector receives. This was a potential sign that the Earth is moving through the galaxy’s supposed halo of dark matter—something that few, if any, researchers could claim.

Reina Maruyama’s job, at a detector buried two-kilometers deep in the South Pole, is to determine whether or not these researchers’ findings are actually valid. Previously, Maruyama worked at the South Pole to detect neutrinos, the smallest known particle. But when it came to detecting dark matter, especially with using detectors buried under glacial ice, she was initially skeptical of the task. In those conditions, she “couldn’t imagine having it run and produce good physics data.”

“There is something in their data that they don’t understand.”

Contrary to Maruyama’s expectations, the detector’s first run went smoothly. Their most recent paper, published in Physical Review D earlier this year, affirmed the South Pole as a viable location for experiments detecting dark matter. The detector, despite the conditions, kept working. At the moment, however, “DM-Ice17,” as her operation is known, is on hiatus, with the team having relocated to Yangyang, South Korea, to focus on COSINE-100, another dark matter particle detector experiment, and continue the search for the modulation seen in DAMA/LIBRA.

Nautilus sat down with Maruyama at Yale this past January to talk about the potential nature of dark matter, the variety of ways scientists use to search for it, and what it’s like working in the South Pole.

What do the scientists behind DAMA claim to have discovered?

What this experiment with DAMA has seen is that in June, the velocity is odd. The sun and Earth are going in the same direction; in December, the velocities are in opposite directions, at about a 10 percent difference. That means in June we expect this signature to occur more frequently than in December. DAMA claims to have seen this annual modulation signature. People started to think about: “Well what is it that DAMA is seeing? Could it be some sort of environmental effect?” We don’t know. They’ve looked at their data, and they’ve argued against every possibility that people have come up with. One thing that the dark matter community has asked them to do is actually release their data, but so far they have refused to do that.

The original idea of DM-Ice was to go to the southern hemisphere where the seasonal variation is opposite in phase, so if we continue to see the signal, then it would be really hard to attribute that signal to something seasonal. If we don’t see anything, then there is something in their data that they don’t understand.

So what is dark matter?

We don’t know what it is. We know it exerts gravity. This is why we call it matter. We see evidence from it: in how stars move around in a galaxy, and galaxies around each other. When we look out at distant stars and galaxies, we can see light being bent around something that exerts gravity, even on photons, but we don’t see any light, x-rays, or clues of things existing.

What we saw was that the speed of the rotating objects are much faster than what you would expect for something like that. So that seems to indicate there is more mass between these objects. You can do that by adding a clump of mass between. That’s what we see: not specific objects, but dark matter diffusely spread out all over, typically surrounding galaxies. There must be dark matter inside the orbit of our sun so that we can move at the speed that we are. That means we are going through this halo of dark matter, riding along with the sun and the earth.

What can we do to prove that dark matter is causing these changes?

Let’s just pick a volume, your coffee, right there. We are hypothesizing that if dark matter is WIMPs, then there’s a very small possibility that the WIMPs going at 300 kilometers per second could interact with the coffee nuclei. If that happens in our detectors, we can actually see a nucleus being kicked by a WIMP. That’s how a lot of particle detectors work: Either there are some energy transfers to the electrons, or there is some energy transfer into the nuclei, and then we detect the electrons or light emitted from that, or sound waves. If those occur at the right energy, with the right frequency, then we can say maybe we see dark matter in our detectors.

“You enter through what looks like a restaurant-refrigerator door.”

When there is a knock into a nucleus you can actually collect two different kinds of signals: the charge and photon emissions. When nuclei get kicks, it transfers some of that energy into electrons, and then the electrons move around, and that process emits light, and in some of that, electrons can be collected, and that is a signal. You need some sort of mass, and you need to be able to tell if a nucleus got a kick. The most efficient way to do that is to have a detector that is also the target, where the nuclei is. You want some big volume to increase the likeliness this can occur. DAMA is using sodium iodide detectors. These are very sensitive experiments, and a lot of these can actually tell the difference between an initial electron kick versus an initial nuclear kick. The electron kicks actually occur much more often in these detectors, so you can reject those as background and just keep the nuclear kicks.

Newer technologies are much more sensitive to nuclear kicks than sodium iodide. Every other experiment that has tried to look for a signature like this has not seen anything. They see nuclear kicks, but mostly attributable to neutrons. They cannot definitively say that this must be dark matter.

How did you come up with the design for your experiments?

With DM-Ice, we wanted to be as similar to DAMA as possible: We want sodium iodide, and we want it to be low-background. So we need shielding around it to block the detector from gamma rays and cosmic rays. The only thing that’s changing should be the dark matter. It turns out the South Pole is actually a pretty good environment. You have an entire continent of ice, which is very stable. Once you go two and a half kilometers into the ice, nothing is changing. Ice at the South Pole, it’s super clean.

Then you need to start worrying about practical things like: Can you get there, and do you have infrastructure to run the experiment? Is it affordable, do you have the right people to do this with? That starts to narrow down the site and the environment. You end up with the a few places in the world you could do this, and then maybe you want to partner with somebody else so that you can afford a bigger detector, and more, better infrastructure that’s more stable. That is the thinking process. Then you have to convince your colleagues in the field that this is a really good idea and need to share a pot of resources available to all U.S. funds. That’s the thought-process behind the experiment.

First you have to get approved to go, but that’s pretty competitive. A lot of people want to go and so if you have a good reason to go, you go. Before you go, you need to get medical clearance. You get checked out. It’s a remote location. They want to make sure you’re not gonna get sick while you’re there. So you spend one or two nights in Christchurch, New Zealand. You meet a lot of other people who might be going with you: engineers, geologists, biologists, other scientists, firemen, cooks, and bus drivers; a lot of really engaged and very passionate people.

When you get to the South Pole, you have take it slow, even though you’re excited and working, it’s 10,000 feet, so they ask you to take it easy your first few days. You enter through what looks like a restaurant-refrigerator door. Keep the cold out kind of thing. Very comfortable, get your own room, dormitory-style living. Water is very precious. All of the energy is provided by jet fuel. So airplanes fly in and siphon off the fuel except for what’s needed for to get back. And there’s a power station where they generate electricity. They get water by melting the ice, and it’s a very expensive process. You get like two-minute showers twice a week. It’s on the honor system. That’s what it’s like living in the station.

What are some problems that you faced when working down there?

It’s 24/7 sunlight. So the sun circles above your head. Because you’re there to get things done, it’s hard to know when to stop working. But before you know it, it’s two in the morning, and the sun’s bright and shining. So you have to make sure you get enough sleep and ready to work the next day. That was a challenge for me.

So when you’re not on site what are you doing in terms of research?

We might have a small-scale detector here and do stress tests on it. Physicists love to tinker: How we can improve these detectors? What if we changed the temperature a lot? How can we make this detector even quieter so that we can look for even smaller signals, or a signal that exists that looks even bigger? People like to say things like we’re looking for a needle in a haystack, so can we reduce the haystack? Can we change the color of the haystack so that the needle looks even more visible?

What’s the future for DM-Ice?

Right now there is no drilling happening at the South Pole. We’ll keep pushing to do that experiment. In the meantime, the detector is buried and frozen into the ice, so we might as well just keep it running. We’re focusing on the Korean effort. What we can do there is look for the signal. If we continue to see the same signal, we can try to look for other correlations and cross them off on our own. If we cannot find other causes for it, I think the case for DAMA becomes stronger. Then DAMA’s signal is not specific to DAMA.