To create a good living replica of the human brain, your best hope may be to let “organoid” components assemble it for you. 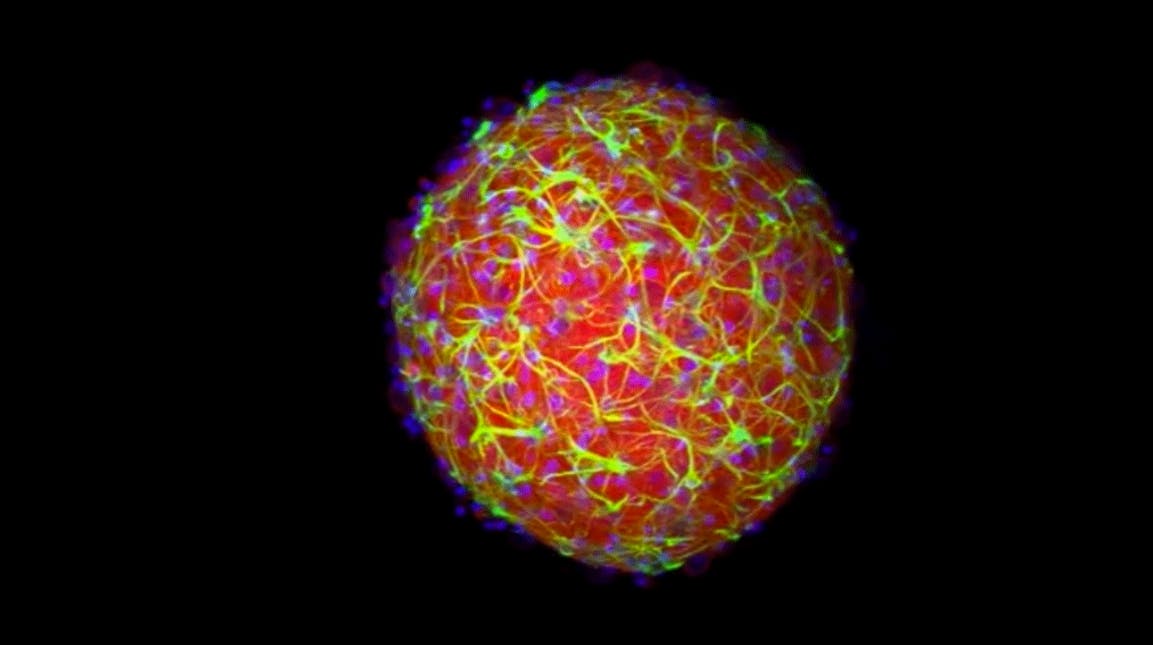 Lead image: This cerebral organoid, or mini-brain, was grown in a laboratory. It contains a diversity of cell types and internal structures that can make it a good stand-in for an actual brain in experiments. Unpredictable variations and deficiencies have hampered the organoids’ usefulness in research, but new techniques for creating mini-brains may change that.
Credit: Hoffman-Kim lab/Brown University

The human brain is routinely described as the most complex object in the known universe. It might therefore seem unlikely that pea-size blobs of brain cells growing in laboratory dishes could be more than fleetingly useful to neuroscientists. Nevertheless, many investigators are now excitedly cultivating these curious biological systems, formally called cerebral organoids and less formally known as mini-brains. With organoids, researchers can run experiments on how living human brains develop—experiments that would be impossible (or unthinkable) with the real thing.

The cerebral organoids in existence today fall far short of earning the “brain” label, mini or otherwise. But a trio of recent publications suggests that cerebral-organoid science may be turning a corner—and that the future of such brain studies may depend less on trying to create tiny perfect replicas of whole brains and more on creating highly replicable modules of developing brain parts that can be snapped together like building blocks. Just as interchangeable parts helped make mass production and the Industrial Revolution possible, organoids that have consistent qualities and can be combined as needed may help to speed a revolution in understanding how the human brain develops.

In 2013 Madeline Lancaster, then of the Austrian Academy of Sciences, created the first true cerebral organoids when she discovered that stem cells growing in a supportive gel could form small spherical masses of organized, functioning brain tissue. Veritable colleges of mini-brains were soon thriving under various protocols in laboratories around the world.

Much to the frustration of impatient experimentalists, however, the mini-brains’ similarity to the real thing only went so far. Their shrunken anatomies were distorted; they lacked blood vessels and layers of tissue; neurons were present but important glial cells that make up the supportive white matter of the brain were often missing.

Worst of all was the organoids’ inconsistency: They differed too much from one another. According to Arnold Kriegstein, director of the developmental and stem cell biology program at the University of California, San Francisco, it was difficult to get organoids to turn out uniformly even when scientists used the same growth protocol and the same starting materials. “And this makes it very difficult to have a properly controlled experiment or to even make valid conclusions,” he explained.

Researchers could reduce the troublesome variability by treating early-stage organoids with growth factors that would make them differentiate more consistently as a less varied set of neurons. But that consistency would come at the expense of relevance, because real brain networks are a functional quilt of cell types—some of which arise in place while others migrate from other brain regions.

For example, in the human cortex, about 20 percent of the neurons—the ones called interneurons, which have inhibitory effects—migrate there from a center deeper down in the brain called the medial ganglionic eminence (MGE). An oversimplified organoid model for the cortex would be missing all those interneurons and would therefore be useless for studying how the developing brain balances its excitatory and inhibitory signals.

Deliverance from those problems may have arrived with recent results from three groups. They point toward the possibility of an almost modular approach to building mini-brains, which involves growing relatively simple organoids representative of different developing brain regions and then allowing them to connect with one another.

The most recent of those results was announced two weeks ago in Cell Stem Cell by a group based at the Yale Stem Cell Center. In the first stage of their experiments, they used human pluripotent stem cells (some derived from blood, others from embryos) to create separate organoid replicas of the cortex and MGE. The researchers then let mixed pairs of the ball-shaped organoids grow side by side. Over several weeks, the pairs of organoids fused. Most important, the Yale team saw that, in keeping with proper brain development, inhibitory interneurons from the MGE organoid migrated into the cortical organoid mass and began to integrate themselves into the neural networks there, exactly as they do in the developing fetal brain.

Earlier this year, teams from the Stanford University School of Medicine and the Austrian Academy of Sciences published reports on similar experiments in which they too developed cortical and MGE organoids and then fused them. The three studies differ significantly in their details—such as how the researchers coaxed stem cells to become organoids, how they nurtured the growing organoids, and what tests they ran on the derived cells. But they all found that the fused organoids yielded neural networks with a lifelike mix of excitatory neurons, inhibitory neurons, and supporting cells, and that they could be developed more reliably than the older types of mini-brain organoids.

To Kriegstein, all three experiments beautifully illustrate that the cells in organoids will readily transform into mature, healthy tissue if given the opportunity. “Once you coax the tissue down a particular developmental trajectory, it actually manages to get there very well on its own with minimal instruction,” he said. He believes that specialized organoids could bring a new level of experimental control to neuroscientists’ explorations: Scientists could probe different brain organoids for information about development within subregions of the brain “and then use that combined or fused platform to study how these cells interact once they start migrating and encountering each other.”

In-Hyun Park, an associate professor of genetics who led the Yale study, is hopeful that organoids might already be useful in preliminary investigations of the developmental roots of certain neuropsychiatric conditions, such as autism and schizophrenia. Evidence suggests that in these conditions, Park said, “there seems to be an imbalance between excitatory and inhibitory neural activity. So those diseases can be studied using the current model that we’ve developed.”

Kriegstein cautions, however, that no one should rush to find clinical significance in organoid experiments. “What we really lack is a gold standard of human brain development to calibrate how well these organoids are mimicking the normal condition,” he said.

Whatever applications organoid research may eventually find, the essential next steps will consist of learning how to produce organoids that are even more true to life, according to Park. He has also not given up hope that it will eventually be possible to create a mini-brain in the laboratory that is a more complete and accurate stand-in for what grows in our head. Maybe doing so will involve a more complex fusion of organoid subunits, or maybe it will demand a more sophisticated use of growth media and chemicals for directing the organoid through its embryonic stages. “There should be an approach to generating a human brain organoid that is composed of forebrain plus midbrain plus hindbrain all together,” Park said.