Mobile Genes From the Mother Shape the Baby’s Microbiome

Tiny genetic sequences in a mother’s bacteria seem to hop into the infant’s bacteria, perhaps ensuring a healthy microbiome later in life. 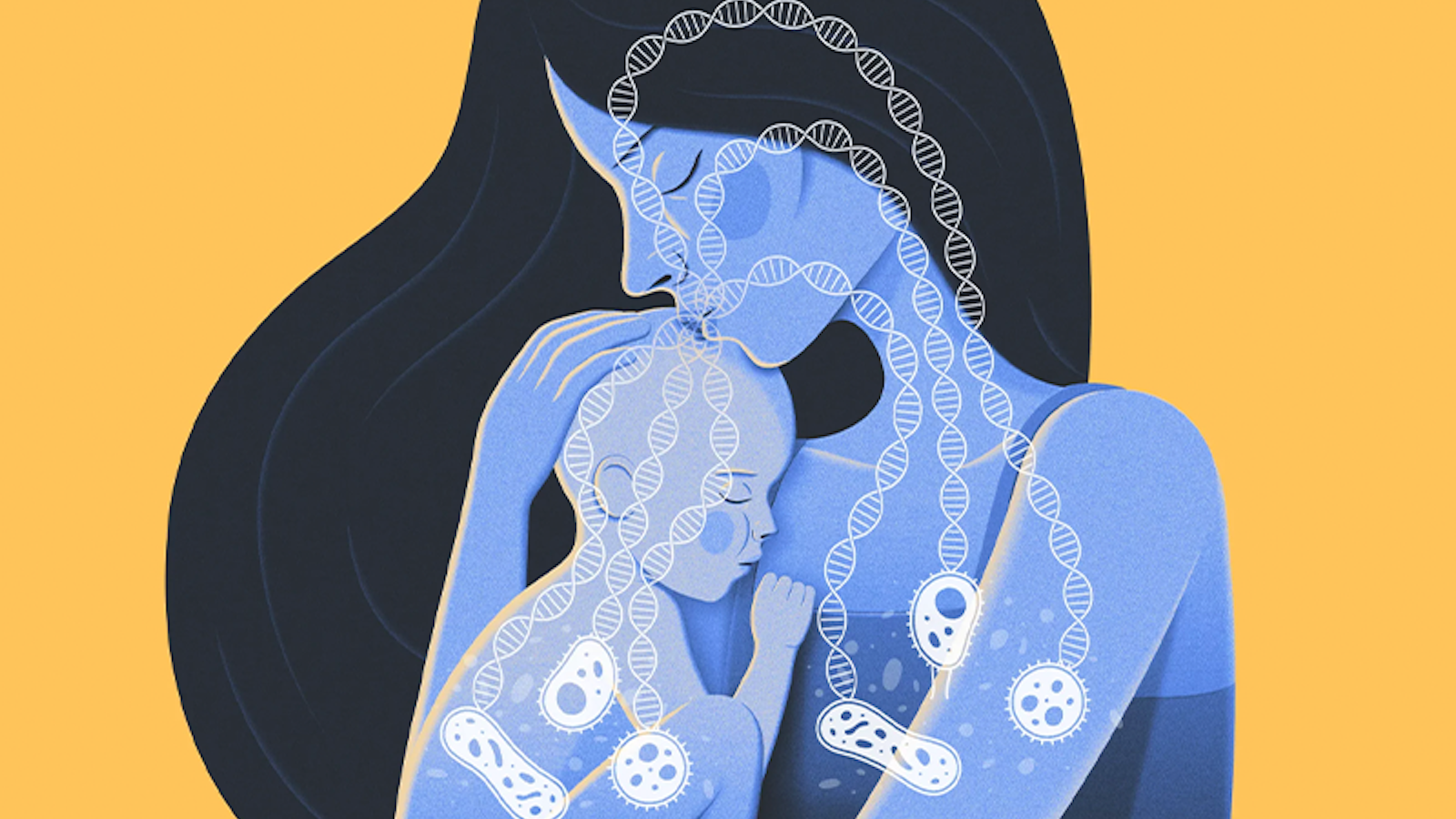 A mother gives her baby her all: love, hugs, kisses … and a sturdy army of bacteria.

These simple cells, which journey from mother to baby at birth and in the months of intimate contact that follow, form the first seeds of the child’s microbiome—the evolving community of symbiotic microorganisms tied to the body’s healthy functioning. Researchers at the Broad Institute of the Massachusetts Institute of Technology and Harvard University recently conducted the first large-scale survey of how the microbiomes of a mother and her infant coevolve during the first year of life. Their new study, published in Cell  in December found that these maternal contributions aren’t limited to complete cells. Small snippets of DNA called mobile genetic elements hop from the mother’s bacteria to the baby’s bacteria, even months after birth.

This manner of transfer, which has never been seen before in the cultivation of an infant’s microbiome, could play a crucial role in promoting growth and development. Understanding how a child’s microbiome evolves could explain why some children are predisposed to certain diseases more than others, said Victoria Carr, a principal bioinformatician at the Wellcome Sanger Institute who was not part of the study.

“It’s a big question: How do we get our microbes?” said Nicola Segata, a professor at the University of Trento in Italy who was also not part of the study.

Our bodies are home to about as many bacterial cells as human cells, and most of them live inside our guts. Each of us harbors massively diverse libraries of bacterial species and strains acquired throughout life. But babies start out almost sterile. The first major infusion of microbes is thought to come from the mother during birth as the infant exits the womb. That bacterial gift creates the scaffolding for a thriving microbial community in the body that sustains us for the rest of our lives. (Infants born by cesarean section don’t get the same initial infusion of microbes that babies get from vaginal birth, but they slowly gather them later.)

One of the microbiome’s effects, Segata explained, is to condition its host’s immune system and metabolism during the first couple of years of life. These initial training days “can have long-lasting consequences that are right now still difficult to comprehend,” he said.

That’s because the metabolites, or chemical products of metabolism, made by the microbiome are thought to influence a baby’s cognitive and immune system development, particularly during a sensitive period in the 1,000 days before and after birth, said Karolina Jabbar, an internist and researcher at the University of Gothenburg who is a co-lead author on the new paper.

In the new study, led by Ramnik Xavier, the director of the Klarman Cell Observatory at the Broad Institute, the researchers collected stool samples from 70 pairs of mothers and their babies, starting early in pregnancy and continuing for the baby’s first year. The researchers then surveyed the mix of microbes and compounds present in the samples and ran genetic analyses to determine which species and which strains of microbes were present. With this data, they could see how the microbiomes of the mothers and babies coevolved during that time.

The big surprise for the team was that even when a baby lacked useful bacterial strains present in the mother, the baby’s microbiome still had snippets of genes belonging to those strains.

“How could the species influence the infant microbial composition without even being part of it?” Jabbar said. She and her lab mates started to wonder if this could be explained by horizontal gene transfer, a quirky process in which genes from one species hop to another species instead of being passed down to an offspring. Horizontal gene transfers are common within communities of bacteria—they contribute greatly to the spread of antibiotic-resistant genes in a variety of pathogens, for example—and they’ve also been found to occur in multicellular organisms.

Still, the researchers weren’t prepared to see hundreds of genes hopping between bacterial communities—from the mother’s microbiome to the baby’s. “It’s one of those things that you don’t at first believe yourself,” said Tommi Vatanen, who is a research fellow at the University of Helsinki and co-lead author on the paper.

The researchers speculate that horizontal gene transfers may be most obvious when bacteria that thrive in the mother’s gut can’t survive in the unfamiliar environment of the infant’s gut. Maternal bacteria may enter the infant’s body through breast milk or as released spores that the infant swallows. Some bacteria will inevitably fail to colonize the child’s body and disappear. But they might last long enough for certain gene sequences to hop into more successful bacteria. If those genetic sequences take root in the genomes of bacteria inside the baby’s gut, they can bring over the functions they encode.

“The fact that even a transient existence of a donor cell can have such an impact to those persistent ones is really fascinating,” Carr said.

In some cases, these hops may have been made possible by prophages—dormant viruses that replicate in bacteria. In the stressful environment of the baby’s gut, prophages may become active and start moving between bacteria, carrying embedded bacterial genes with them.

In their analysis of infant stool samples, Vatanen, Jabbar, and their colleagues identified an apparent example: A prophage that was integrated into the DNA of one bacterial species showed up in a different bacterium months later.

“It’s quite convincing evidence that this particular phage had jumped between two different species,” Vatanen said. The researchers also found that genes hopped between bacterial species in other ways, such as through direct cell-to-cell contact or through a bacterial cell engulfing DNA released into the environment.

One big group of genes that jumped encoded the cellular machinery that makes horizontal gene transfers possible. Other mobile sequences helped with carbohydrate and amino acid metabolism, and may therefore have greatly benefited the bacteria. For example, the results suggest that genes related to the digestion of carbohydrates found in breast milk might be shared from mothers to infants in this way, Jabbar said. The researchers don’t know for certain that the horizontal transfers benefit the baby directly, but by assembling a more capable gut microbiome, they may help with the development of the baby’s immune system.

Some of these genetic sequences turned up in new bacteria months after birth, which suggests that the transfers continued to occur during that time. It’s not clear whether transfers were happening before birth as well, but the researchers did find that the mother’s microbiome evolved during pregnancy. Some of the changes seemed likely to affect the body’s ability to tolerate glucose. Those findings suggest that the diabetes some people develop while pregnant could be linked to the microbiome.

When the researchers collected stool samples from the infants, they also took samples of their immune cells. Now they are planning to use those samples to examine how the bacteria that infants carry, including those bacteria that contain these mobile elements, interact with immune cells. Insights from these experiments could lead to a better understanding of how and why some people develop allergies or autoimmune diseases.

The existence of such mobile elements has been known since the pioneering geneticist Barbara McClintock discovered them in the 1940s, an achievement for which she won the Nobel Prize. “But it’s never really been characterized to such depth until recently,” Carr said. “Now that we’re getting more insights, we’re realizing that actually, mobile genetic elements are having a bigger impact than we previously realized.”

In us, it turns out, that impact starts very early in life.

Lead image: Through transfers of bacteria and genes that continue for many months after birth, a mother may nurture the healthy development of an infant. Credit: Kristina Armitage / Quanta Magazine.