Neurons Unexpectedly Encode Information in the Timing of Their Firing

A temporal pattern of activity observed in human brains for the first time may explain how we can learn so quickly. 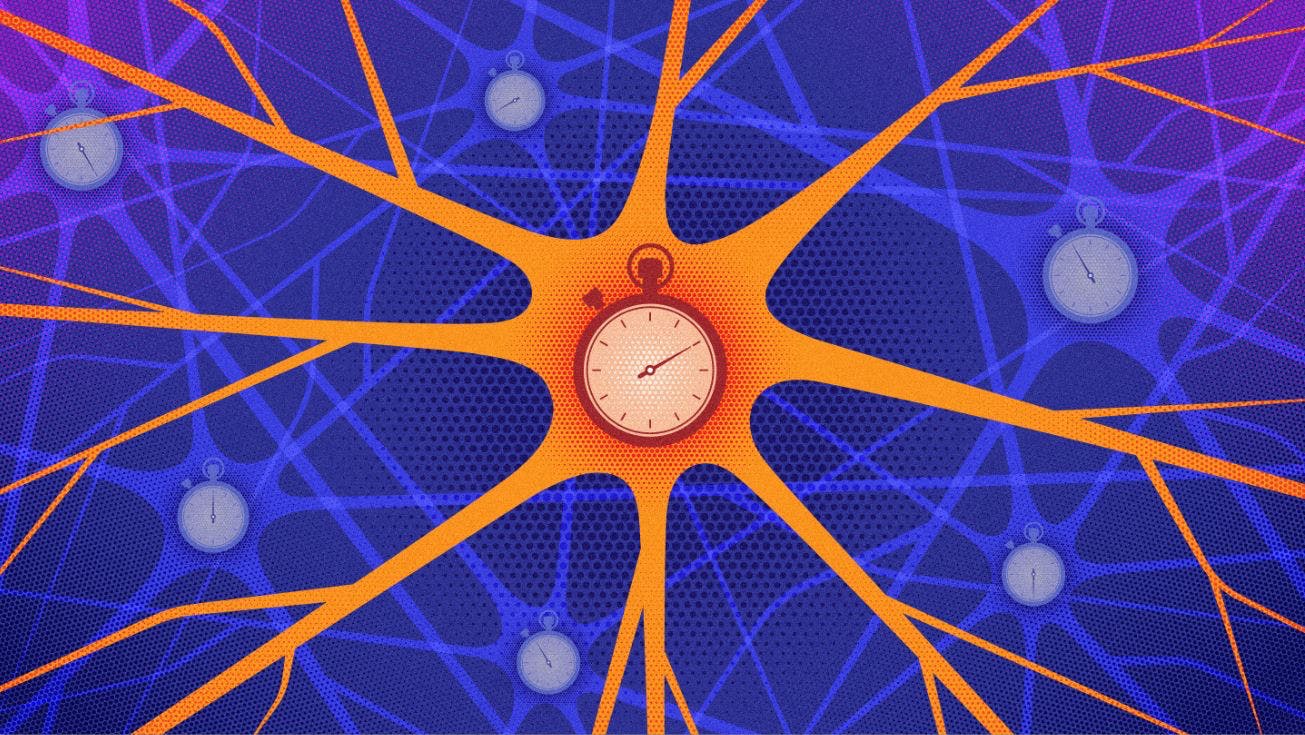 For decades, neuroscientists have treated the brain somewhat like a Geiger counter: The rate at which neurons fire is taken as a measure of activity, just as a Geiger counter’s click rate indicates the strength of radiation. But new research suggests the brain may be more like a musical instrument. When you play the piano, how often you hit the keys matters, but the precise timing of the notes is also essential to the melody.

“It’s really important not just how many [neuron activations] occur, but when exactly they occur,” said Joshua Jacobs, a neuroscientist and biomedical engineer at Columbia University who reported new evidence for this claim in June 2021 Cell article.

For the first time, Jacobs and two coauthors spied neurons in the human brain encoding spatial information through the timing, rather than rate, of their firing. This temporal firing phenomenon is well documented in certain brain areas of rats, but the new study and others suggest it might be far more widespread in mammalian brains. “The more we look for it, the more we see it,” Jacobs said.

Some researchers think the discovery might help solve a major mystery: how brains can learn so quickly.

The phenomenon is called phase precession. It’s a relationship between the continuous rhythm of a brain wave—the overall ebb and flow of electrical signaling in an area of the brain—and the specific moments that neurons in that brain area activate. A theta brain wave, for instance, rises and falls in a consistent pattern over time, but neurons fire inconsistently, at different points on the wave’s trajectory. In this way, brain waves act like a clock, said one of the study’s coauthors, Salman Qasim, also of Columbia. They let neurons time their firings precisely so that they’ll land in range of other neurons’ firing—thereby forging connections between neurons.

Researchers began noticing phase precession decades ago among the neurons in rat brains that encode information about spatial position. Human brains and rat brains both contain these so-called place cells, each of which is tuned to a specific region or “place field.” Our brains seem to scale these place fields to cover our current surroundings, whether that’s miles of freeway or the rooms of one’s home, said Kamran Diba, a neuroscientist at the University of Michigan. The closer you get to the center of a place field, the faster the corresponding place cell fires. As you leave one place field and enter another, the firing of the first place cell peters out, while that of the second picks up.

But along with rate, there’s also timing: As the rat passes through a place field, the associated place cell fires earlier and earlier with respect to the cycle of the background theta wave. As the rat crosses from one place field into another, the very early firing of the first place cell occurs close in time with the late firing of the next place cell. Their near-coincident firings cause the synapse, or connection, between them to strengthen, and this coupling of the place cells ingrains the rat’s trajectory into the brain. (Information seems to be encoded through the strengthening of synapses only when two neurons fire within tens of milliseconds of each other.)

Phase precession is obvious in rats. “It’s so prominent and prevalent in the rodent brain that it makes you want to assume it’s a generalizable mechanism,” Qasim said. Scientists had also identified phase precession in the spatial processing of bats and marmosets, but the pattern was elusive in humans until now.

Monitoring individual neurons is too invasive to do on the average human study participant, but the Columbia team took advantage of data collected years ago from 13 epilepsy patients who had already had electrodes implanted to map the electrical signals of their seizures. The electrodes recorded the firings of individual neurons while patients steered their way through a virtual-reality simulation using a joystick. As the patients maneuvered themselves around, the researchers identified phase precession in 12% of the neurons they were monitoring.

“You might be missing a whole lot of information coding if you’re not tracking the relative timing of neural activity,” says Salman Qasim.

Pulling out these signals required sophisticated statistical analysis, because humans exhibit a more complicated pattern of overlapping brain waves than rodents do—and because less of our neural activity is devoted to navigation. But the researchers could say definitively that phase precession is there.

Other research suggests that phase precession may be crucial beyond navigation. In animals, the phenomenon has been tied to non-spatial perceptions, including processing sounds and smell. And in humans, research co-authored by Jacobs and published in 2020 found phase precession in time-sensitive brain cells. A not-yet-peer-reviewed preprint by cognitive scientists in France and the Netherlands indicated that processing serial images involved phase precession, too. Finally, in Jacobs’ new study, it was found not just in literal navigation, but also as the humans progressed toward abstract goals in the simulation.

These studies suggest that phase precession allows the brain to link sequences of times, images and events in the same way as it does spatial positions. “Finding that first evidence really opens the door for it to be some sort of universal coding mechanism in the brain—across mammalian species, possibly,” Qasim said. “You might be missing a whole lot of information coding if you’re not tracking the relative timing of neural activity.”

Neuroscientists are, in fact, on the lookout for a new kind of coding in the brain to answer the longstanding question: How does the brain encode information so quickly? It’s understood that patterns in external data become ingrained in the firing patterns of the network through the strengthening and weakening of synaptic connections. But artificial intelligence researchers typically have to train artificial neural networks on hundreds or thousands of examples of a pattern or concept before the synapse strengths adjust enough for the network to learn the pattern. Mysteriously, humans can typically learn from just one or a handful of examples.

Phase precession could play a role in that disparity. One hint of this comes from a study by Johns Hopkins researchers who found that phase precession showed up in rats learning an unfamiliar track—on their first lap. “As soon as you’re learning something, this pattern for learning sequences is already in place,” Qasim added. “That might facilitate very rapid learning of sequences.”

Phase precession organizes the timing so that learning happens more often than it could otherwise. It arranges for neurons activated by related information to fire in quick-enough succession for the synapse between them to strengthen. “It would point to this notion that the brain is basically computing faster than you would imagine from rate coding alone,” Diba said.

There are other theories about our rapid learning abilities. And researchers stressed that it’s difficult to draw conclusions about any widespread role for phase precession in the brain from the limited studies so far.

Still, a thorough search for the phenomenon may be in order. Bradley Lega, a neurologist at the University of Texas Southwestern Medical Center, said, “There’s a lot of problems that phase precession can solve.”