The rapid, unorthodox emergence of a new finch in the Galápagos hints that speciation isn’t rare. New hybrid species may quietly appear and disappear without anyone noticing. 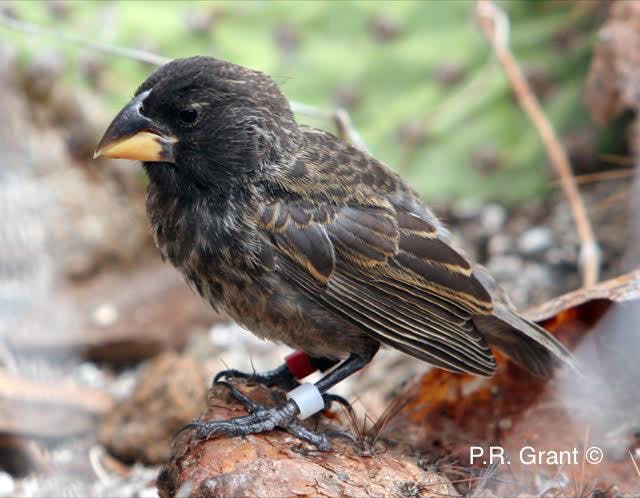 It’s not every day that scientists observe a new species emerging in real time. Charles Darwin believed that speciation probably took place over hundreds if not thousands of generations, advancing far too gradually to be detected directly. The biologists who followed him have generally defaulted to a similar understanding and have relied on indirect clues, gleaned from genomes and fossils, to infer complex organisms’ evolutionary histories.

Some of those clues suggest that interbreeding plays a larger role in the formation of new species than previously thought. But the issue remains contentious: Hybridization has been definitively shown to cause widespread speciation only in plants. When it comes to animals, it has remained a hypothesis (albeit one that’s gaining increasing support) about events that typically occurred in the distant, unseen past.

Until now. In a paper published last month in Science, researchers reported that a new animal species had evolved by hybridization—and that it had occurred before their eyes in the span of merely two generations. The breakneck pace of that speciation event turned heads both in the scientific community and in the media. The mechanism by which it occurred is just as noteworthy, however, because of what it suggests about the undervalued role of hybrids in evolution.

In 1981, Peter and Rosemary Grant, the famous husband-and-wife team of evolutionary biologists at Princeton University, had already been studying Darwin’s finches on the small Galápagos island Daphne Major for nearly a decade. So when they spotted a male bird that looked and sounded different from the three species residing on the island, they immediately knew he didn’t belong. Genetic analysis showed he was a large cactus finch (Geospiza conirostris) from another island, either Española or Gardner, more than 60 miles away—too great a distance for the bird to fly home.

Tracking the marooned male bird’s activity, the Grants observed him as he mated with two female medium ground finches (G. fortis) on Daphne and produced hybrid offspring. Such interbreeding by isolated animals in the wild is not uncommon, though biologists have usually dismissed it as irrelevant to evolution because the hybrids tend to be unfit. Often they cannot reproduce, or they fail to compete effectively against established species and quickly go extinct. Even when the hybrids are fertile and fit, they frequently get reabsorbed into the original species by mating with their parent populations.

But something different happened with the hybrids on Daphne: When they matured, they became a population distinct from Daphne’s other bird species by inbreeding extensively and exclusively—siblings mating with siblings, and parents mating with their offspring.

In short, an incipient hybrid species, which the researchers dubbed the Big Bird lineage, had emerged within two generations. Today, six generations have passed, and the island is home to around 30 Big Bird finches. “If you were a biologist none the wiser to what had happened,” said Leif Andersson, a geneticist at Uppsala University in Sweden and one of the study’s co-authors, “and you started studying these birds, you’d think there were four different species on the island.”

On Daphne Major, the conditions may have been just right for hybrid speciation. “It shows what is possible, given the right circumstances,” Peter Grant said, and it sends “a valuable message about the importance of rare and unpredictable events in evolution. These have probably been underestimated.”

The Big Bird lineage became reproductively isolated so quickly because those birds could not successfully attract mates among the island’s resident species, which preferred their own kind. Big Bird finches couldn’t pass muster: They had relatively large beaks for their body size, and they boasted a unique song. These differences prevented gene flow between the hybrids and the native medium ground finches from which they had descended, leading to a distinct hybrid population. (In their Science paper, the Grants and their colleagues noted that the species status of Big Bird finches is still unofficial because no one has yet tested whether the birds will breed with their ancestral finches on Española and Gardner. But they cited reasons to suspect that the Big Bird lineage is reproductively isolated from them as well.)

The physical differences in the hybrid lineage also made them competitive. The size and shape of the Big Birds’ beaks placed them squarely in their own ecological niche, allowing them to eat certain types of seeds their competitors could not. “The data is consistent with selection having taken place,” Andersson said.

The fact that this niche was available for Big Bird to occupy is likely a result of the particularly young, isolated and often extreme environment of the Galápagos. “Conditions on the islands really help drive the speciation process,” said Scott Edwards, an ornithologist at Harvard University

The same might be said for small and isolated environments elsewhere, such as mountaintops or ponds. By contrast, speciation isn’t likely to occur this way in less isolated regions, said Trevor Price, an ecologist at the University of Chicago. In those areas, where competition for resources is already fierce, a new hybrid species like Big Bird would find no niche for itself.

But hybrid species may have had more widespread opportunities to establish themselves in the past. Perhaps, Price suggested, this rapid production of species could have occurred in the aftermath of the meteorite impact that caused mass extinction on Earth millions of years ago. At that time, there were resources and potential niches, and not enough species to fill them.

Some experts think that even today hybrid speciation may be far from rare. Under the most commonly accepted speciation model, called allopatric speciation, populations get geographically separated—by a change in a river’s course, say, or the formation of a mountain, or diverging migrations—and then adapt to distinct competitors and environments over long periods. If the groups ever meet again, they may no longer be similar enough to interbreed.

But very fast hybrid speciation events like the one the Grants saw on Daphne may often occur in bursts—only to end with the new species dying out before we have time to observe it. “Speciation is common. It’s happening all around us,” said James Mallet, an evolutionary biologist at Harvard University. “It’s just that usually we don’t recognize the divergent lineages that are appearing as separate species.”

He continued, “I believe that speciation is more of a continuum than people have been thinking.” At one extreme, species can be cleanly divided from one another, with no interbreeding and exchange of genes. But to greater or lesser degrees, hybridization could also allow genes to flow into a species from others, and the resulting hybrids could sometimes develop an identity of their own, even if only temporarily.

Mallet argues that hybrid species could very well be appearing all the time, only to collapse and disappear just as quickly, with the hybrids either going extinct or being absorbed back into a parent population. “To me, that shows the abundance of opportunities for speciation,” he said. Just because many hybrids go extinct—a fate that is still very likely to befall the Big Bird lineage, according to Mallet—doesn’t mean that hybridization is not a real source of new species in nature.

Instead, he sees speciation as an almost fractal process that can be observed in ecosystems over different timescales. “If you look at the macro level over millions of years,” Mallet said, “you’ll see a few species evolving and going extinct.” But at the micro level, on the order of dozens of years or less, species may be forming and dissolving all the time. Most biologists simply don’t have the long-term data to show it, he said.

What made it possible to identify such an event in Darwin’s finches was the Grants’ decades of careful fieldwork, followed by detailed genomics studies. The new paper illustrates “the value of continuous, long-term studies in nature,” Peter Grant said. Without that, “we would not have detected or been able to interpret the immigration of an individual of one species and interbreeding with a member of the resident species.”

Although biologists do not yet know how much animal hybrid speciation occurs outside the Galápagos, they are becoming increasingly aware of hybrids as a powerful agent of evolution. “I think this paper really increases that signal,” Edwards said. “Researchers like me are going to be looking for it much more regularly.”

Lead image: The Big Bird lineage of Galápagos finches seems to be a novel species that arose in just a few years through hybridization.