New Clues to Chemical Origins of Metabolism at Dawn of Life

The ingredients for reactions ancestral to metabolism could have formed very easily in the primordial soup, October 2020 work suggests. 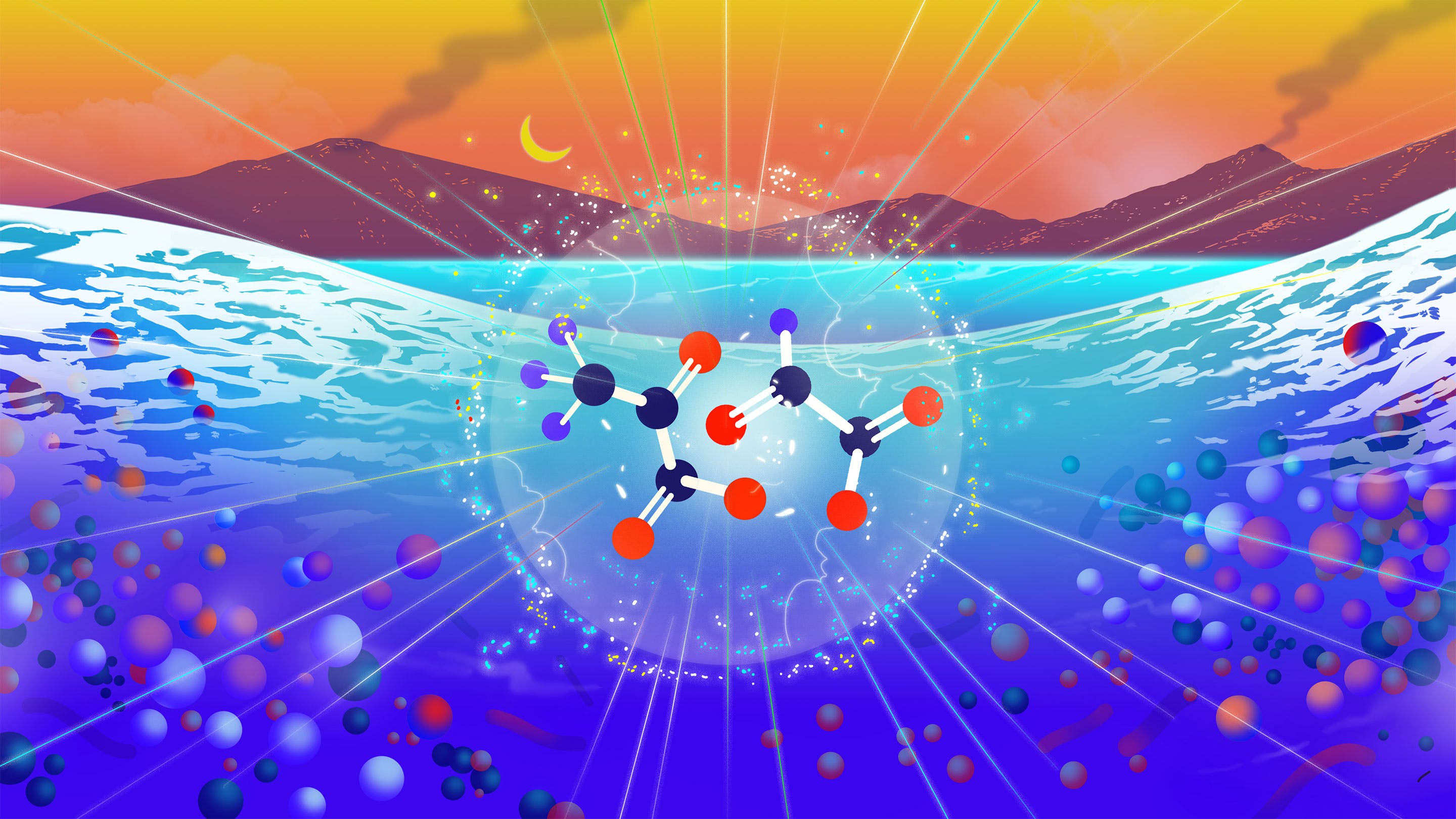 Popular speculations about how life evolved out of a soup of chemicals on the early Earth often focus on the origins of DNA and RNA, the molecules of genetic information. But the genesis of genes is only one of the mysteries that origin-of-life theories must reckon with. Another is the rise of metabolism—the biochemical processes inside cells that make life possible by continuously drawing energy from the environment and directing it into the assembly of vital molecules. It’s a complex problem on which there has been little headway.

But scientists may have just turned an important corner in that search. On October 12, 2020, in Nature Chemistry, researchers at Furman University and the Scripps Research Institute announced a discovery about how one of the most important parts of cellular metabolism might have come to be. The researchers showed that, elaborate as that chemical mechanism is in cells today, nearly all the ingredients for a potential forerunner to it could have formed easily from just two simple organic compounds reacting in water.

Other scientists hailed the significance of the October 2020 findings, as well as the originality and rigorous chemical expertise of the researchers.

A central pillar of all cellular metabolism—and the bane of generations of high school biology students who had to memorize it—is a complex 10-step chemical process variously known as the tricarboxylic acid (TCA) cycle, the citric acid cycle or the Krebs cycle. “The TCA cycle is at the heart of much of modern biology, where it is used both to break down food into energy and to synthesize vital building blocks of proteins,” said Greg Springsteen, a professor of chemistry at Furman University, an origins-of-life researcher and one of the authors of the study. Anaerobic organisms can also run the cycle in reverse to transform carbon dioxide into the organic building blocks of fats and sugars.

Because the TCA cycle feeds into so many vital processes in even the simplest cells, scientists suspect it was one of the early reactions to establish itself in the prebiotic soup. To reconstruct how it evolved, biochemists have generally tried to work backward by replacing the eight enzymes involved in the modern TCA cycle with transition metals, since those can act as catalysts for many reactions and should have been abundant. But the transition metals often failed to produce the desired intermediary molecules, or catalyzed their breakdown as fast as they made them, and the metals typically needed high temperatures or other extreme conditions to work. “Metals and harsh conditions can be good [at] accelerating the reactions yet also [promote] the destruction of the products,” said Juli Peretó, a professor of biochemistry and molecular biology at the University of Valencia in Spain. “This situation makes rather implausible or unrealistic some of the proposed schemes.”

To the origins-of-life researcher Ramanarayanan Krishnamurthy, an associate professor of chemistry at the Scripps Research Institute and another co-author of the October 2020 paper, this was “a classic case of how the focus solely on biological clues has led this community into a corner, which has stymied real progress in the field.”

Krishnamurthy, Springsteen and their colleagues took a completely different approach. Instead of trying to find the precursor to the TCA cycle by swapping in simpler versions of its components, they started by asking what versatile reactants might have been present in the prebiotic world and then looked at how much they could do under various circumstances. “Basically, we looked at what small molecules would have been available and what would be their chemistry,” Krishnamurthy said.

Or as Springsteen put it, “We were following rather than leading the chemistry.”

They started with just two compounds—glyoxylate and pyruvate, the two smallest alpha-ketoacids, containing only two and three carbon atoms respectively. Alpha-ketoacids drew their attention because of “their stability in water and their propensity to form carbon-carbon bonds, the skeleton of biology,” Springsteen said.

Astonishingly, they found that the glyoxylate and pyruvate reacted to make a range of compounds that included chemical analogues to all the intermediary products in the TCA cycle except for citric acid. Moreover, these products all formed in water within a single reaction vessel, at temperatures and pH conditions mild enough to be compatible with conditions on Earth.

Krishnamurthy described it as “embarrassingly easy” to come up with these results. No one appears to have even tried something like this previously, he said, because “the community convinced themselves that metals must be used and never gave a thought to the possibility that might not be the case.”

Springsteen noted that in most organic synthesis experiments, the conditions need to be tightly regulated, and the starting reactants and the products need to be added and removed with care. “Comparatively, the chemistry we discovered here was a dream to run: All you really needed to do to get the pathway started was [to] drop two stable reactants into buffered water and stick it on a warm hotplate,” he said. “The chemistry was extremely robust.

The productivity of the reactions far exceeded their original expectations because it was not obvious at first how some of them could proceed in the absence of some third reagent that would serve as a reductant (that is, a source of electrons). Then they discovered that the glyoxylate under aqueous conditions was simultaneously doing two jobs, acting as a raw material in the reaction and as a reductant to facilitate it. “It took months of experiments to convince ourselves we understood it,” Springsteen said. “We had the basic outlines of the pathway understood by mid-2018 and then spent two years exploring and demonstrating the full landscape of the chemistry.”

Krishnamurthy and Springsteen both emphasize that their experiments do not prove that the ancestor of the TCA cycle emerged this way: There are similarities between the reactions and intermediary molecules they created and those in the TCA cycle, but without further evidence, it is more prudent to refer to them as analogs of TCA cycle intermediaries. They did not create a cycle of any kind, just a mixture of molecules that could in principle be organized to act as one.

But if the precursors of cells had those molecules at their disposal, then they might have performed some of the synthetic chemistry useful to life. That first draft of metabolism would almost certainly have been crude and poorly controlled, and it might not have even been organized into a complete cycle. But over time, as proteins also became part of the mix, enzymes could have taken control over some of the reactions, and the real TCA cycle might have started to take shape.

The Present Can Be Misleading

The demonstration that something like a linchpin of modern metabolism could have emerged under mild, minimally demanding conditions therefore makes a prebiotic origin for the TCA cycle look more feasible, which the metal catalyst experiments did not. And the researchers’ open-minded approach to this research was a big part of what made that possible.

“I think that’s a key insight: We can become too biased by what we see today in biology,” said Sheref Mansy, a professor of chemistry at the University of Alberta, who was not involved in the study. The paper shows that by fully exploring the potential of chemicals that could plausibly have existed at the dawn of life, “you can uncover things that would not have been obvious if you had this narrow view of what you think should have occurred.” He added, “I think in many ways, it is a game-changer.”

Peretó agrees: “For me, the main lesson is that we should reconsider the way we think about the origin of metabolism” because working backward from what is in cells today “can be misleading.” But while noting that the work by Krishnamurthy, Springsteen and their colleagues was “a significant step” forward in understanding the origins of metabolism, he warned that “we still have to unravel many other details to compose a coherent and plausible narrative of the origin of life.”

Mansy, too, was cautious in his interpretation of the work despite his enthusiasm for it. “Metabolism isn’t just providing building blocks. It’s really a sort of flux of energy that maintains the low entropy state of a cell,” he said. For him, part of what’s still missing is evidence that some kind of proto-metabolism helped the precursors of cells survive better (even if those precursors weren’t, strictly speaking, alive). “Until we start understanding how this kind of chemistry can give a selective advantage to one encapsulated chemical system against another … I don’t know where it all goes,” he said.

Krishnamurthy agrees about there being much more to do. “The next logical step is to see what natural opportunities arise for the series of intermediates produced in this reaction sequence to be converted to other interesting compounds,” such as amino acids, nucleobases and sugars, he said. It will also be necessary to determine what could have been robust sources of glyoxylate and pyruvate in the prebiotic world.

Even if scientists can still only conjecture about the origins of metabolism, these results offer hope that answers may be in reach—if researchers ask the right questions. That’s why Krishnamurthy says he often ends his talks about the origins of life by quoting a remark by the biochemist Leslie Orgel, one of the field’s greatest pioneers. “Anybody who thinks they know the solution to this problem is deluded,” Orgel said. “But anybody who thinks this is an insoluble problem is also deluded.”

Editor’s note: Krishnamurthy and Mansy are affiliated with the Simons Collaboration on the Origins of Life, funded by the Simons Foundation, which also funds this editorially independent magazine.

Lead image: On the early Earth, a forerunner of the complex cycle of reactions that underpins metabolism in today’s cells might have originated from interactions between just two simple, versatile molecules in water, according to new research. Credit: Glenn Harvey for Quanta Magazine