In three bursts of adaptive change, one species of cichlid fish in Lake Tanganyika gave rise to hundreds. 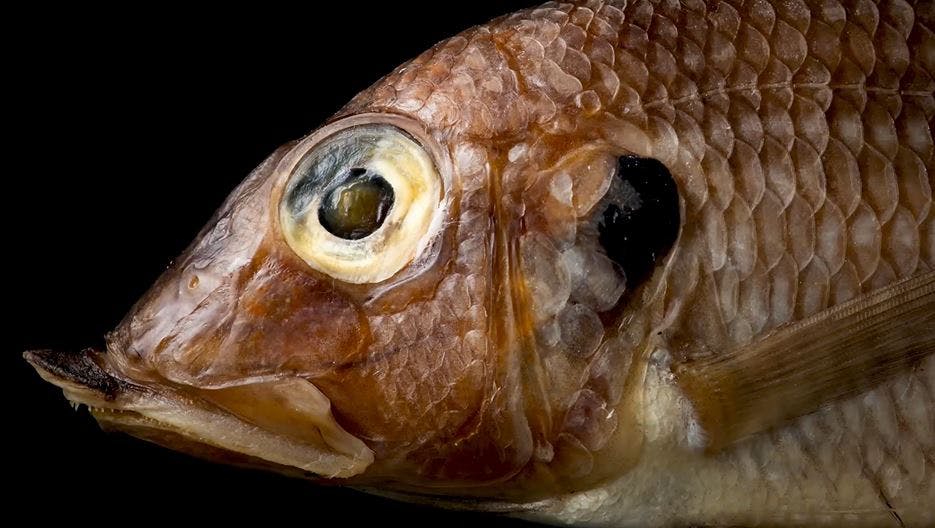 Africa’s deepest freshwater lake holds a dizzying array of animals, including hundreds of species of cichlid fish found nowhere else in the world. They crowd the waters of Lake Tanganyika, with scales and stripes in most colors of the rainbow. One kind of cichlid there measures just over an inch; others are 2 to 3 feet long.

“When you’re snorkeling in the water with these fish, it’s just incredibly striking how different they are,” said Catherine Wagner, an assistant professor of botany at the University of Wyoming. Throughout history, local fishermen have pulled up the cichlids in nets for food, but for several decades researchers from around the globe have collected these fish as well in their quest to understand that lush diversity.

A November 2020 study in Nature offers a new wealth of data on Lake Tanganyika’s cichlids and uses it to outline the wild ebb and flow of evolution for these fish, which diversified from one common ancestor to an astonishing 240 or so cichlid species in less than 10 million years.

That’s a very small amount of time for so many species to evolve, said Walter Salzburger, an associate professor at the University of Basel’s Zoological Institute and senior author on the study. And this process wasn’t gradual or random—the data reveals that these cichlids evolved predominantly in bursts. “It’s still surprising how clear and distinct these pulses of accelerated evolution are,” Salzburger said.

Mapping out the emergence of all these species took Salzburger’s team several years. The researchers compiled a list of the lake’s cichlid species after they tracked down descriptions in scientific records as well as in books and magazines written about cichlids (which are so visually striking that they have become popular aquarium fish). In between encounters with crocodiles and hippos during their months in Africa, the researchers snorkeled and dived to gather examples of every cichlid they could. Fishermen on the lake provided specimens that live deeper than divers can reach. “Whenever we saw a boat, we would ask, ‘What do you have?’” said Fabrizia Ronco, a postdoctoral researcher at the University of Basel and first author on the study. Eventually, they amassed a collection of almost every one of Lake Tanganyika’s 240 cichlid species, including dozens that had not been described previously.

Back on land, the researchers scanned the fish to examine their skeletal structures, studied the differences in their genes, and analyzed their chemical composition for clues to the ecological niche each occupied. The team accumulated enough details to reveal how all the species are related and when they diverged from one another.

“It’s just a fantastic amount of data,” Wagner said. “This was just a dream, a sparkle in our eyes 10 years ago, that we would be able to sequence this many genomes.”

“It’s still surprising how clear and distinct these pulses of accelerated evolution are,” said Walter Salzburger of University of Basel.

One finding was that all but a handful of the species have a common ancestor that lived only about 9.7 million years ago. That corresponds to shortly after Lake Tanganyika is believed to have formed, which strongly implies that the species evolved within the lake from that one ancestral species, and not from multiple colonization events over the millennia.

This fact confirmed for the researchers that Tanganyika’s cichlids were ideal subjects for testing ideas about adaptive radiation—an evolutionary event in which many diverse species emerge rapidly and adapt to new environmental niches. Evolutionary theorists have two models for how adaptive radiation might play out. In one, rapid diversification in some aspect of body morphology produces a burst of new species at first, and then speciation slows as the available niches fill up. In the other model, differences in species emerge in stages as a lineage cracks open opportunities available to it, which means that the rate of speciation can both rise and fall over time. Evolutionary biologists have turned up only limited evidence to bolster either of these theories.

Cichlid species that are physically very different can evolve through developmental changes that alter the relative sizes and positions of their skeletal structures. Credit: Halil Kesselring

Surprisingly, when the researchers examined their cichlid data, both models seemed to be relevant. The cichlids mostly evolved in three episodes of adaptive radiation: one based on changes in body shape, one based on changes in mouth shape and one on changes in a second set of jaws in the fishes’ throat. An initial pulse of evolution produced a slew of new species with different body shapes, which lent support to the idea that speciation is concentrated near the beginning of an adaptive radiation. But in the later spurts of speciation involving mouth and jaw shapes, the rate of evolution seemed to get higher later in the process. “The different shapes seemed to be important in different phases of the adaptive radiation,” Ronco said.

This cichlid data set gives a uniquely detailed and rich picture of adaptive radiation, but these patterns may not hold in all cases. Other research on cichlids in African lakes, for example, has found patterns that don’t fit the stages model. According to Joana Isabel Meier, a research fellow in zoology at the University of Cambridge, the new data from Lake Tanganyika are “certainly not inconsistent with the stages of adaptive radiation,” but it’s far from settled.

“When you’re snorkeling in the water with these fish, it’s just incredibly striking how different they are,” said Catherine Wagner of University of Wyoming.

“The question of what determines biological diversity has pestered evolutionary biologists ever since Wallace and Darwin came up with their theory of evolution,” Salzburger said. The new study doesn’t provide conclusive answers, but it does expose a possibly telling imbalance in the cichlids’ evolutionary tree. Some branches saw an abundance of species form, while others remained sparse. In those differences, the researchers spotted an intriguing relationship: The most genetically diverse cichlid species were from branches that gave rise to more species; the sparest branches held the most genetically homogenous species.

This difference in genetic diversity across branches could be explained by hybridization, in which different cichlid species interbreed and introduce more genetic diversity into a genome. “This idea has been floating around, and there’s been more and more evidence for it,” Wagner said. Hybridization is often suspected to fuel the explosive evolution that constitutes an adaptive radiation. “But this is kind of a different take on it, that hybridization may be a really pervasive pattern,” she said.

The researchers suggested that if there is more hybridization within branches of cichlids than between the branches, it could cause the disparity, although it wasn’t clear from the data that this occurred. But hybridization could play an even more central role early in the cichlids’ evolution, Meier said. Hybridization in cichlid ancestors could even have triggered the adaptive radiations that produced so many species.

The factors responsible for this contrast—prolific speciation in some cichlid branches and little in others—continue to draw researchers’ attention. “That’s what I think is really the missing piece,” Wagner said. Hybridization may open up opportunities for rapid evolution. The resources available to a species could shape its evolution, or other nearby organisms could dictate it. It could even be random. But Lake Tanganyika is “like a little microcosm for understanding the workings of evolution,” Wagner said. “The hope is that eventually all these data sets can come together and give us a really incredible understanding.”

Lead image and video: Researchers have reconstructed how the hundreds of cichlid fish species native to Lake Tanganyika in Africa evolved through adaptive diversifications in their body shapes, mouth parts and jaw structures. Credit: Halil Kesselring