A newfound pair of giant viruses have massive genomes and the most complete resources for building proteins ever seen in the viral world. They have refreshed the debate about the origins of these parasites. 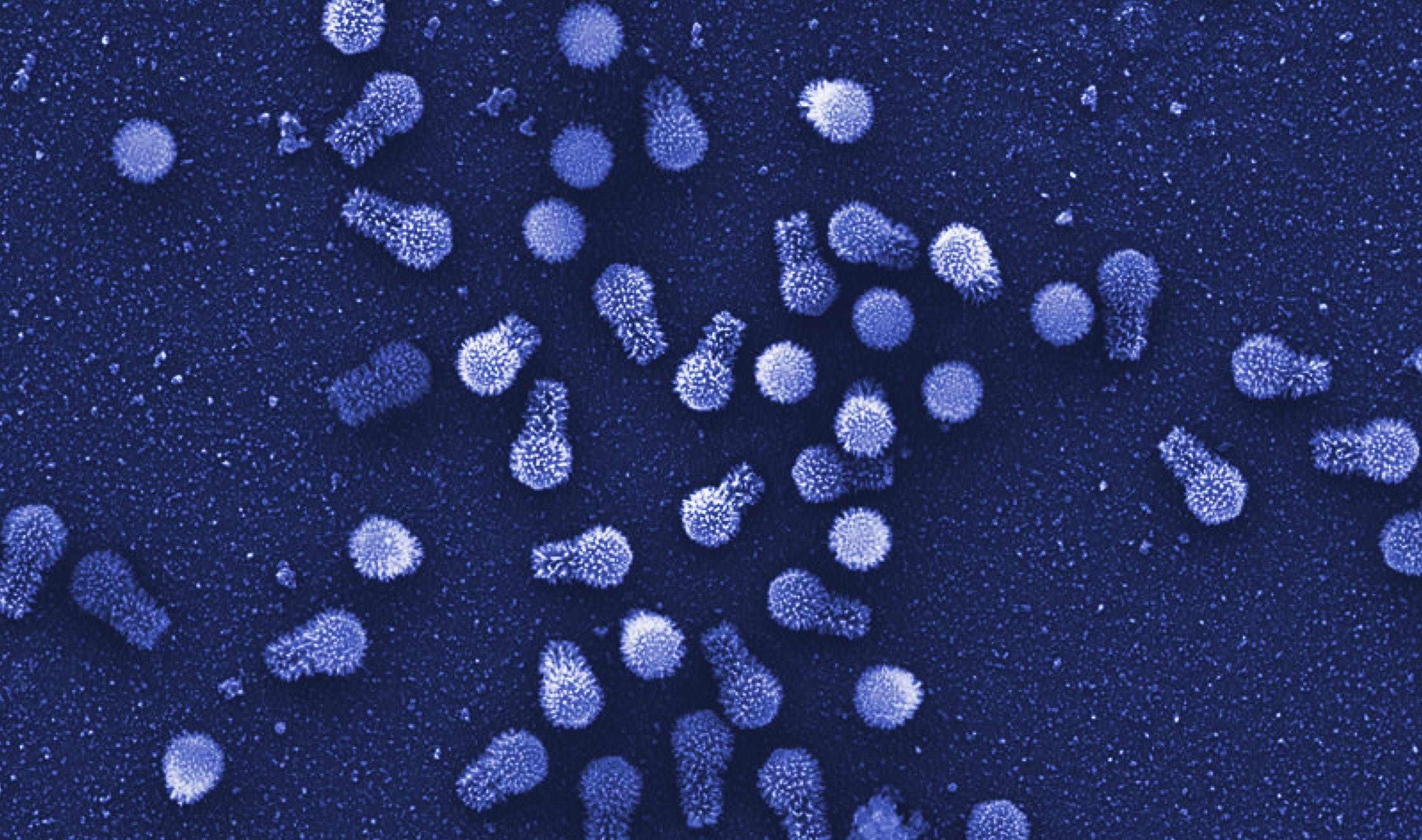 For decades, descriptions of viruses have straddled life and nonlife, a divide that usually isn’t difficult to navigate. Their hallmark characteristics, namely their small size, tiny genomes, and parasitic dependence on cellular hosts for replication, set them apart from all other living things despite their animation. But that story has gotten far more puzzling—particularly since the discovery of the first giant virus in 2003, which was so large that researchers initially thought it was a bacterium.

Several families of giant viruses are now known, and some of those giants have more than 1,000 genes; one has a whopping 2,500. (By comparison, some small viruses have only four genes.) Among those genes are ones involved in translation, the synthesis of proteins—a finding that came as a shock. “It appears that giant viruses are as complex as living organisms,” said Chantal Abergel, an evolutionary biologist at Aix-Marseille University in France.

That conclusion was reinforced last week when scientists reported in Nature Communications that they had found two new giant amoeba-infecting viruses in Brazil, which they named tupanviruses (after Tupã, a thunder god of the regional people). Tupanviruses are striking, and not just because they possess long tails: They have the most complete set of translation-related genes seen to date, including those for all 20 of the enzymes that determine the specificity of the genetic code. The only components they are missing are full-length ribosomal genes. Whether all those elements actually function still needs to be tested.

Tupanviruses are not unique: Last year, for example, researchers published an analysis of a different group of new giant viruses called klosneuviruses, which similarly turned out to encode an extensive protein-making apparatus. “It’s remarkable that viruses seem to mingle into the translational domain so extensively,” said Matthias Fischer, a virologist at the Max Planck Institute for Medical Research in Germany who was not involved with either study.

That mingling has sparked contentious debate among scientists about when and how giant viruses evolved. All of viral evolution is murky: Different groups of viruses likely had very different origins. Some may have been degenerate “escapees” from cellular genomes, while others descended directly from the primordial soup. “Still others have recombined and exchanged genes so many times in the course of evolution that we will never know where they originally came from,” Fischer said.

As examples of this diversity, giant viruses could help illuminate more about how viruses operate and evolve. But even their own origins and evolutionary path are unsettled. One side holds that the giant viruses evolved from smaller viruses over 2 billion years by adding genes, through processes such as horizontal gene transfer and gene duplication. The other maintains that the viruses started out large from the very beginning—and may even have been autonomous organisms—before losing genes they no longer needed and diversifying into the strains we see today.

The reason for the split lies in the fact that some of the giant viruses’ genes are related to those found in other cellular organisms—archaea, bacteria, and eukaryotes—on the tree of life, while others appear to be completely unlike anything else on record. Thirty percent of the tupanvirus genome falls into the latter category, and in other viruses that fraction is even larger.

“Tupanvirus, as with most of the giant viruses, brings more questions than answers,” said Jônatas Abrahão, a microbiologist at the Federal University of Minas Gerais in Brazil, and the lead author of the Nature Communications study. “Its discovery will fuel further debate about the origin of giant viruses and how that evolution drove the relationships between the viruses and their hosts.”

If all giant viruses turn out to share translation-related genes that are unique to their group, then it would mean they had a large common ancestor, an ancient virus that diversified over time, and it would lend support to the idea that giant viruses started out big and constitute their own domain of life.

Abergel doesn’t believe they should be their own branch, but “I do think the viruses were already large, complex systems from the outset,” she said. In her view, the origin of life witnessed coevolving protocells that used different strategies of survival. Ultimately, the ancestors of cells were the ones that emerged dominant, equipped with fully operational translation machinery, forcing the “losers of evolution”—the ancestors of the giant viruses—to become parasitic to avoid being completely wiped out. Tupanviruses and others have so many genes involved in protein-making today because of that coevolutionary process, Abergel said.

But rather than finding genes and proteins with the same evolutionary history, “we get a mixed picture,” Fischer said. A handful of the translation components are widespread among the giant viruses, but many are present in only a few and are closely related to sequences found in eukaryotes. That implies viruses could have started out small—likely as mobile genetic elements, as was posited in 2014 by Eugene Koonin, a biologist at the National Center for Biotechnology Information in Maryland, and Mart Krupovic, a microbiologist at the Pasteur Institute in France. Then, over time, as they infected different hosts, the viruses would have picked up new genes and incorporated them into their translational repertoire.

Research published on the scientific preprint site biorxiv last year lends support to this view. Scientists studying a different type of giant virus uncovered “translation machinery that seems to be in a turnover state,” said Christoph Deeg, a graduate student at the University of British Columbia and lead author on the paper. The virus appeared to be losing some of its genes as it adapted to a host that used a different translation apparatus. Moreover, its genome as a whole pointed to substantial gene duplication and expansion. “It goes to show how these viruses got so big,” Deeg said, “which backs the idea that translation machinery was picked up from the outside and not from having been part of some original fourth domain.”

For now, the tupanviruses provide just one more piece in the puzzle, helping to refine the relationships among the giant viruses. For further insights into their evolution, the researchers will need to analyze the translation-related genes to determine which of them are active, what they do and which are essential for the viruses to replicate successfully. “What’s so amazing is that’s something they can actually start to test in the lab,” said Frederik Schulz, a research scientist at the Department of Energy Joint Genome Institute in California and lead author of last year’s klosneuvirus paper.

In the meantime, the classification of viruses remains unclear. Tupanviruses seem to be dependent on their hosts for very little, and other viruses, according to one preprint, even encode ribosomal proteins. “The gap between cellular organisms and viruses is starting to close,” Deeg said. “Which then brings us back to: What is a virus, and what is life?”