Researchers fired a laser at a gas of muonic deuterium in order to measure the size of its nucleus. 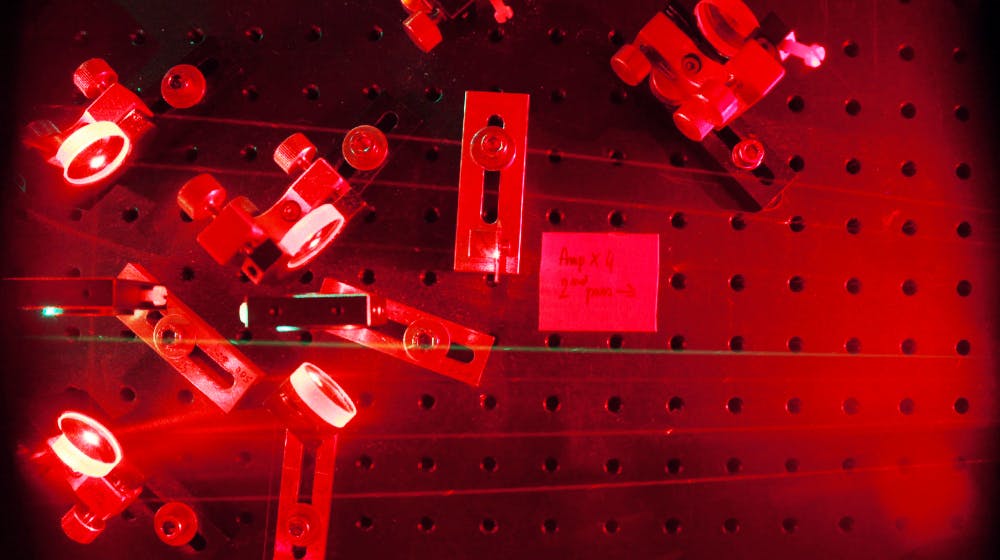 The same group that discovered a curious discrepancy in measurements of the size of the proton, giving rise to the “proton radius puzzle,” has now found a matching discrepancy in measurements of a nuclear particle called the deuteron. The new finding, published in the journal Science, increases the slim chance that something is truly amiss, rather than simply mismeasured, in the heart of atoms.

The puzzle is that the proton — the positively charged particle found in atomic nuclei, which is actually a fuzzy ball of quarks and gluons — is measured to be ever so slightly larger when it is orbited by an electron than when it is orbited by a muon, a sibling of the electron that’s 207 times as heavy but otherwise identical. It’s as if the proton tightens its belt in the muon’s presence. And yet, according to the reigning theory of particle physics, the proton should interact with the muon and the electron in exactly the same way. As hundreds of papers have pointed out since the proton radius puzzle was born in 2010, a shrinking of the proton in the presence of a muon would most likely signify the existence of a previously unknown fundamental force — one that acts between protons and muons, but not between protons and electrons. (Interestingly, this new physics could also explain a long-standing discrepancy in the measurement of the muon’s anomalous magnetic moment.)

This “would, of course, be fantastic,” said Randolf Pohl of the Max Planck Institute of Quantum Optics in Garching, Germany, who led both the 2010 experiment and the new study. “But the most realistic thing is that it’s not new physics.”

The question is: Were all the measurements using regular hydrogen simply off — all accidentally too large? When I first corresponded with Pohl in 2013, the year he and his colleagues reported an updated muonic hydrogen measurement in Science, he emailed me a plot showing how, historically, measurements of physical constants have often drifted dramatically as techniques change and improve before converging on their correct values. “Quite instructive, no?” Pohl wrote. He was keeping things in perspective.

But he and his group were also keeping at it. Already, they had begun the study that was finally published this week.

This time, they measured the radius of the deuteron, the nucleus of a deuterium atom (an isotope of hydrogen) that is comprised of a proton and a neutron. They measured it in muonic deuterium, in which a muon orbits a deuteron. The scientists then compared their measurement to the deuteron radius as measured in regular, electron-orbited deuterium, and asked: Is there a deuteron radius puzzle to match the proton’s?

To actually measure that radius, the researchers fire a laser at a gas of muonic deuterium, causing muons to jump to a higher energy level that does not overlap with the nucleus. The team can pinpoint the energy required for the muon to undergo the transition, revealing how weakly bound the muon was when residing partly inside the deuteron. From this they can figure out where “inside the deuteron” begins — that is, its radius.

When they did this, Pohl and company found that the deuteron radius is smaller when measured in muonic deuterium compared to the average value using electronic deuterium, just as with the proton radius discrepancy. The size difference scales from proton to deuteron exactly as they would expect if both effects come from a new force. “So now there are two discrepancies, and they are completely independent,” aside from being measured by the same group, Pohl said.

Still, Pohl is highly skeptical that the puzzle is evidence of new fundamental physics.

His personal guess is that physicists have misgauged the Rydberg constant, a factor that goes into calculating the expected differences between atomic energy levels. While it is considered one of the most accurately measured constants, a small error could account for the proton and deuteron radius puzzles.

To test this possibility, physicists in Toronto are attempting to measure the proton radius in a way that sidesteps the Rydberg constant. Other experiments are under way to test alternative hypotheses, mundane and exciting alike. Pohl’s group is diving into muonic helium, a system in which the effects of a new force, if it exists, should be enhanced, since there are two protons. We’ll keep you posted.