A study challenged the evidence for the mysterious antigravitational force known as dark energy. Then cosmologists shot back. 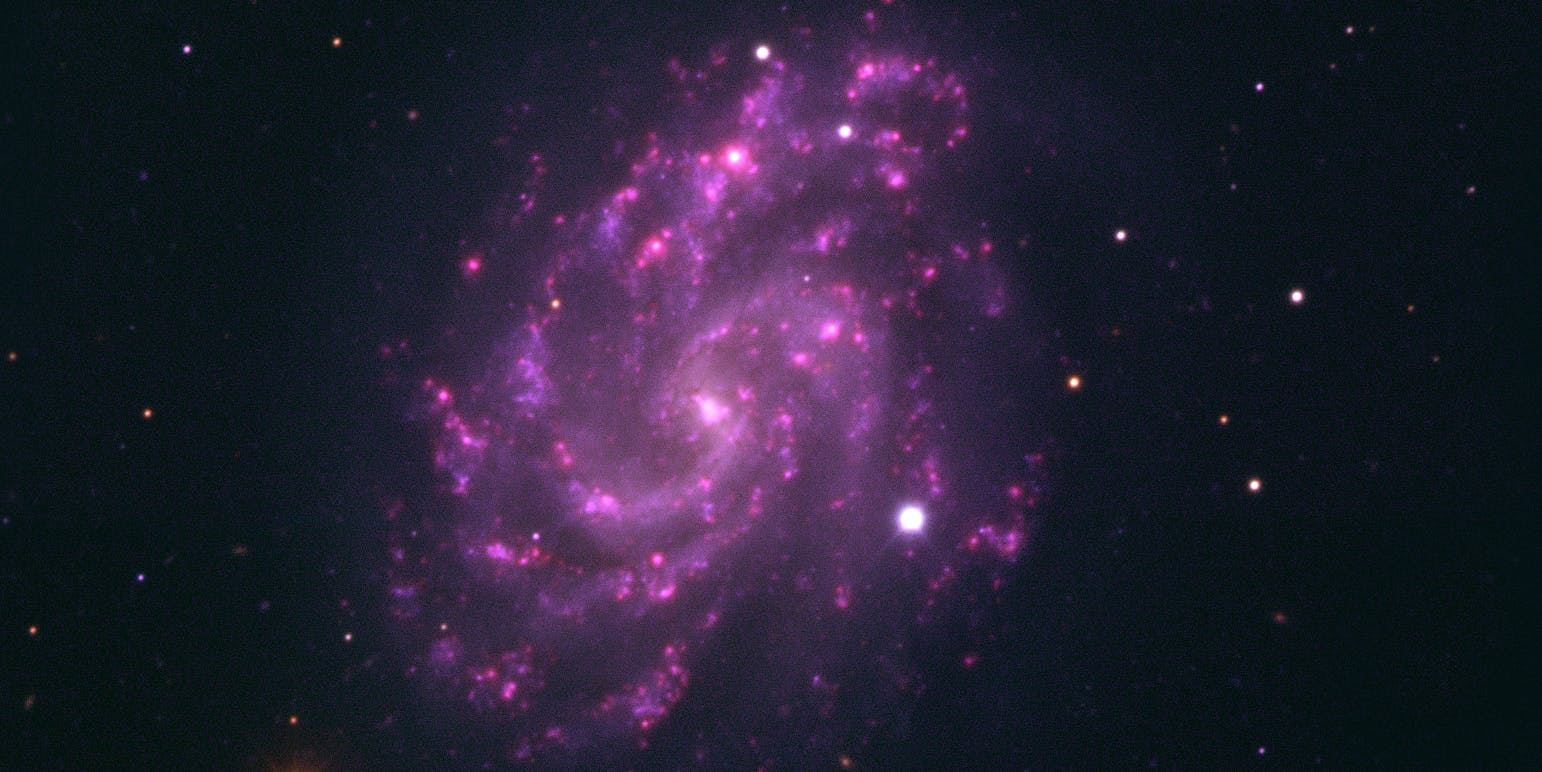 Dark energy, mysterious as it sounds, has become part of the furniture in cosmology. The evidence that this repulsive energy infuses space has stacked up since 1998. That was the year astronomers first discovered that the expansion of the universe has been speeding up over time, with dark energy acting as the accelerator. As space expands, new space arises, and with it more of this repulsive energy, causing space to expand even faster.

Two decades later, multiple independent measurements agree that dark energy comprises about 70% of the universe’s contents. It is so baked into our current understanding of the cosmos that it came as a surprise when a November 2019 paper published in the journal Astronomy & Astrophysics questioned whether it’s there at all.

The four authors, including the Oxford physicist Subir Sarkar, performed their own analysis of data from hundreds of supernovas—the stellar explosions that provided the first evidence for cosmic acceleration, a discovery that earned three astronomers the 2011 Nobel Prize in Physics. When Sarkar and his colleagues looked at supernovas, they didn’t see a universe that’s accelerating uniformly in all directions due to dark energy. Rather, they say supernovas look the way they do because our region of the cosmos is accelerating in a particular direction—roughly toward the constellation Centaurus in the southern sky.

Outside experts almost immediately began picking the paper apart, finding apparent flaws in its methodology. Now, two cosmologists have formalized those arguments and others in a paper that was posted online on December 6, 2019 and submitted to The Astrophysical Journal. The authors, David Rubin and his student Jessica Heitlauf of the University of Hawaii, Manoa, detail four main problems with Sarkar and company’s data handling. “Is the expansion of the universe accelerating?” their paper title asks. “All signs still point to yes.”

Outside researchers praised the thorough dissection. “The arguments by Rubin et al. are very convincing,” said Dragan Huterer, a cosmologist at the University of Michigan. “Some of them I was aware of upon looking at the original [Astronomy & Astrophysics paper], and others are new to me but make a lot of sense.”

However, Sarkar and his co-authors—Jacques Colin and Roya Mohayaee of the Paris Institute of Astrophysics and Mohamed Rameez of the University of Copenhagen—don’t agree with the criticisms. Days after Rubin and Heitlauf’s paper appeared, they posted a rebuttal of the rebuttal.

The cosmology community remains unmoved. Huterer said this latest response at times “misses the point” and attempts to debate statistical principles that are “not negotiable.” Dan Scolnic, a supernova cosmologist at Duke University, reaffirmed that “the evidence for dark energy from supernovas alone is significant and secure.”

The expansion of space stretches light, reddening its color. Supernovas appear more “redshifted” the farther away they are, because their light has to travel farther through expanding space. If space expanded at a constant rate, a supernova’s redshift would be directly proportional to its distance, and thus to its brightness.

But in an accelerating universe filled with dark energy, space expanded less quickly in the past than it does now. This means a supernova’s light will have stretched less during its long journey to Earth, given how slowly space expanded during much of the time. A supernova located at a given distance away (indicated by its brightness) will appear significantly less redshifted than it would in a universe without dark energy. Indeed, researchers find that the redshift and brightness of supernovas scales in just this way.

In their November 2019 paper, Sarkar and collaborators took an unconventional approach to the analysis. Normally, any study of supernova data has to account for Earth’s movement: As Earth orbits the sun, which orbits the galaxy, which orbits the local group of galaxies, we and our telescopes hurtle through space at around 600 kilometers per second. Our net motion is toward a dense region near Centaurus. Consequently, light coming from that direction is subject to the Doppler shift, which makes it look bluer than the light from the opposite side of the sky.

It’s standard to correct for this motion and to transform supernova data into a stationary reference frame. But Sarkar and company did not. “If you don’t subtract that [motion], then it puts the same Doppler shift into the supernova data,” Rubin explained in an interview. “Our claim is that most of the effect is due to the solar system’s motion.”

Another problem with the paper, according to Rubin and Heitlauf, is that Sarkar and colleagues made a “plainly incorrect assumption”: They failed to account for the fact that cosmic dust absorbs more blue light than red.

Because of this, a supernova in a relatively “clean,” dust-free region looks especially blue, since there’s less dust that would otherwise absorb its blue light. The lack of dust also means that it will appear brighter. Thus, the faraway supernovas we spot with our telescopes are disproportionately blue and bright. If you don’t control for the color-dependent effect of dust, you will infer less difference between the brightness of nearby supernovas (on average, dustier and redder) and faraway supernovas (on average, bluer and brighter)—and as a result, you will infer less cosmic acceleration.

The combination of these and other unusual decisions allowed Sarkar’s group to model their supernova data with a “dipole” term, an acceleration that points in a single direction, and only a small, or possibly zero, “monopole” term describing the kind of uniform acceleration that signifies dark energy.

This dipole model has two other problems, said Rubin and Heitlauf. First, the model includes a term that says how quickly the dipole acceleration drops to zero as you move away from Earth; Sarkar and company made this distance small, which means that their model isn’t tested by a large sampling of supernovas. And second, the model doesn’t satisfy a consistency check involving the relationship between the dipole and monopole terms in the equations.

Not All the Same

The day Rubin and Heitlauf’s paper appeared, Sarkar said by email, “We do not think any revisions need to be made to our analysis.” He and his team soon posted their rebuttal of the duo’s four points, mostly rehashing earlier justifications. They cited research by Natallia Karpenka, a cosmologist who has left academia for a career in finance, to support one of their choices, but they misconstrued her work, Rubin said. Four other cosmologists contacted by Quanta said the group’s response doesn’t change their view.

Those who find the back-and-forth about data analysis hard to follow should note that the data from supernovas matches other evidence of cosmic acceleration. Over the years, dark energy has been inferred from the ancient light called the cosmic microwave background, fluctuations in the density of the universe called baryon acoustic oscillations, the gravitationally distorted shapes of galaxies, and the clustering of matter in the universe.

Sarkar and colleagues ground their work in a respectable body of research on the “cosmological fitting problem.” Calculations of cosmological parameters like the density of dark energy (which is represented in Albert Einstein’s gravity equations by the Greek letter lambda) tend to treat the universe as smooth, averaging over the universe’s inhomogeneities, such as its galaxies and voids. The fitting problem asks whether this approximation might lead to incorrect inferences about the values of constants like lambda, or if it might even suggest the presence of a lambda that doesn’t exist.

But the latest research on the question—including a major cosmological simulation published summer 2019—rejects that possibility. Inhomogeneities “could change lambda by 1 or 2%,” said Ruth Durrer of the University of Geneva, a co-author on that paper, “but could not get rid of it. It’s simply impossible.”