A camera lens often used by wildlife and sports photographers has helped astronomers learn about dark matter and galaxy formation. 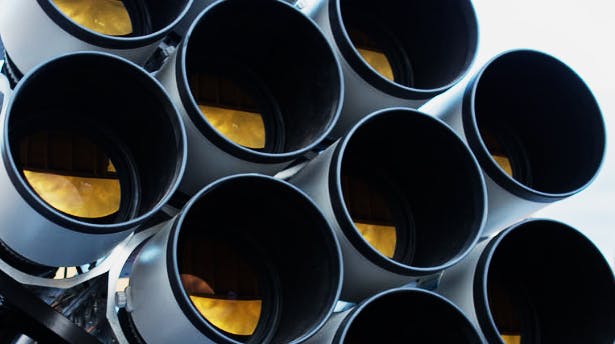 The reviews for Canon’s 400-millimeter telephoto camera lens praise its sharpness and speed when used to photograph football players and red-tailed hawks. Reviewers don’t mention that this retail lens is yielding new discoveries about dark matter and galaxy formation.

The astronomers Roberto Abraham of the University of Toronto and Pieter van Dokkum of Yale University turned to the lens hoping to resolve a puzzle about the growth and structure of galaxies. According to the cold dark matter theory of cosmology, small galaxies merge and form larger ones, steadily building up the structure of the universe. But scientists should be able to see more evidence of these mergers than they currently do. This may be because even the most advanced telescope lenses scatter too much incoming light to pick up the faint mergers of small and diffuse galaxies.

In 2013, to resolve dimmer galaxies, Abraham and van Dokkum built what they dubbed the “Dragonfly Telephoto Array” out of three Canon 400mm f/2.8L IS II telephoto lenses. The lenses come with nano-fabricated coatings that reduce the scattering of light. And by combining the redundant images produced by multiple lenses in a “compound eye” configuration (like that of the array’s namesake), the scientists could further remove the effects of scattering. The Dragonfly array has now grown to 48 lenses in two clusters.

The arrangement has paid off. In August, Abraham, van Dokkum and their colleagues reported the discovery of Dragonfly 44, a galaxy almost as massive as our own but much dimmer, containing just one star for every 100 in the Milky Way. The rest of the galaxy is presumably made of dark matter. As Joshua Sokol explains in a recent Quanta Magazine article, “Strange Dark Galaxy Puzzles Astrophysicists,” the finding may upset our current theories of galaxy formation.

The team has earned some much-coveted time on the Hubble Space Telescope to further study Dragonfly 44.

“The thing I find hilarious is we’re using humanity’s most powerful telescope in space to follow up a bunch of telephoto lenses,” Abraham said.

For anyone interested in building a backyard array to study dark matter and the stars, each lens will set you back a mere $10,000.