Perceptions of Musical Octaves Are Learned, Not Wired in the Brain

Singing experiments with residents of the Bolivian rainforest demonstrate how biology and experience shape the way we hear music. 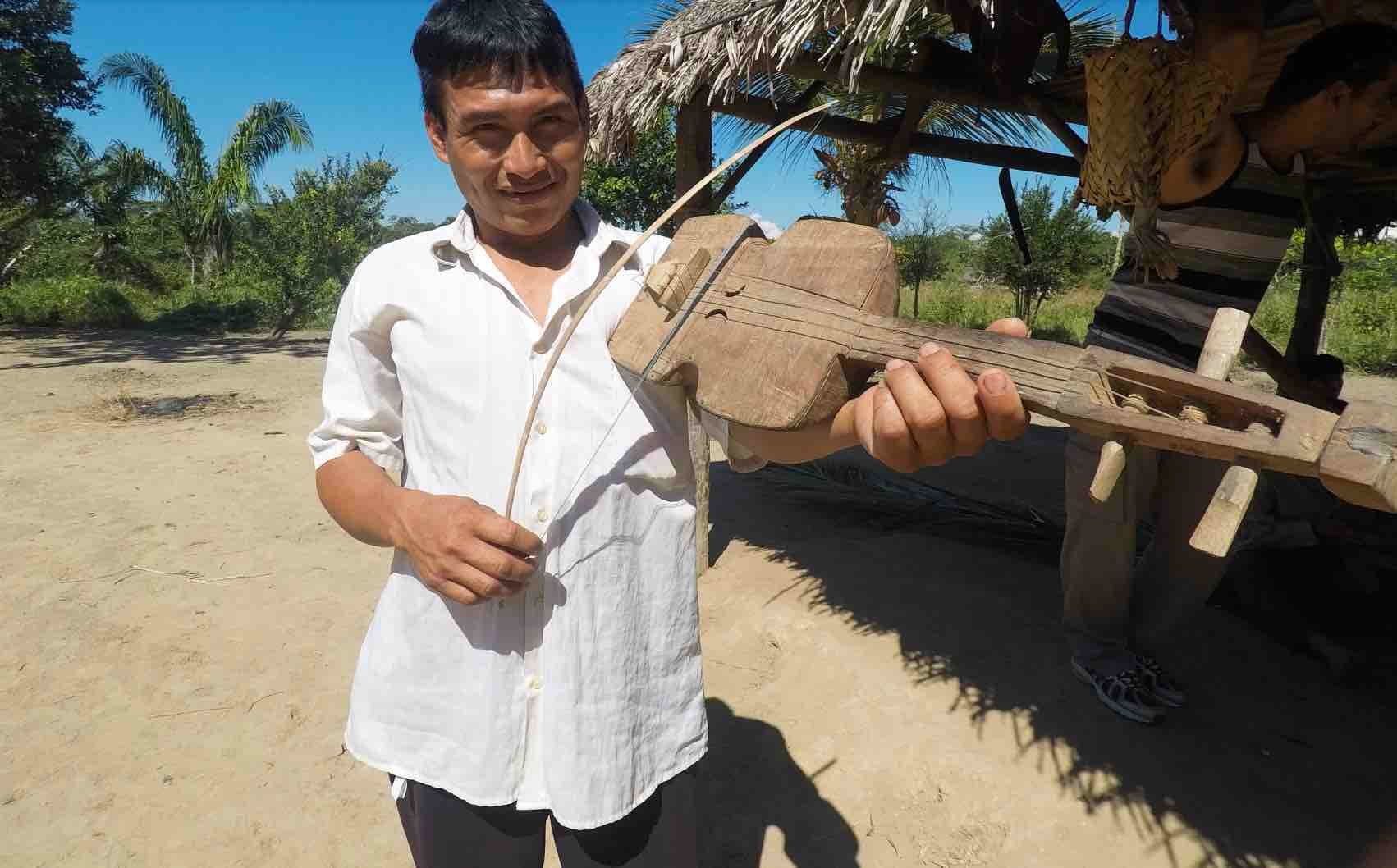 In the lowlands of Bolivia, the most isolated of the Tsimané people live in communities without electricity; they don’t own televisions, computers or phones, and even battery-powered radios are rare. Their minimal exposure to Western culture happens mostly during occasional trips to nearby towns. To the researchers who make their way into Tsimané villages by truck and canoe each summer, that isolation makes the Tsimané an almost uniquely valuable source of insights into the human brain and its processing of music.

Most studies about music perception examine people accustomed to Western music, so only a few enclaves like these remote Tsimané villages allow scientists to make comparisons across cultures. There they can try to tease apart the effects of exposure to music from the brain’s innate comprehension of it—or at least start dissecting the relationship between the two. “We need to understand that interplay between our genes and our experience,” said Josh McDermott, an associate professor of brain and cognitive sciences at the Massachusetts Institute of Technology. He is the senior author of a recent paper involving the Tsimané in the journal Current Biology which suggests that a feature of music most of us might consider to be intrinsic—the perceived organization of musical pitches into octaves— s a cultural artifact.

Musical systems around the world and across historical eras have been diverse, but octaves are commonly a feature of them. The acoustic structure of octaves is always the same: The frequency of a note in one octave is half the frequency of the same note in the octave above. For example, middle C, or C4, is 261.63 hertz, while C5, one octave up, is 523.25 hertz. These physical qualities of sound in the ear have routinely led to assumptions that octave equivalence—the perception of pitches in different octaves as variations on the same note—is universal, according to Elizabeth Margulis, a professor of music at Princeton University.

McDermott and an international team of colleagues have now tested that assumption with their experiments, in which they asked Tsimané volunteers to listen and sing. A machine played two notes, one after the other, and the subject would sing them back into a microphone. The researchers played pairs of notes different distances apart on the scale and in different pitch ranges.

Computer analyses that compared the Tsimané participants with those in the United States found that both groups generally preserved the pitch intervals between the notes played to them—for example, maintaining the difference between a middle C and middle A. Both groups could also discriminate well between pitches only up to about 4,000 hertz, near the highest key on a piano, C8. For pairs of notes higher than that, everyone seemed to have trouble characterizing the differences.

A curious difference emerged, however, in how they sang the notes back. When the notes played were very high or low, U.S. participants accurately shifted the notes into an octave within their vocal range. The Tsimané didn’t. To them, it seemingly wasn’t clear what notes in their range best corresponded to the ones they heard. Their responses didn’t seem to reflect a perception of octave structure at all.

The researchers went so far as to coach the Tsimané to switch octaves. They gave feedback, like “excellent!” (Anic jäm’ in Tsimané) or “OK” (Dam’ jäm’), depending on how close their responses were to the notes of the prompt. The villagers did not get closer, however. It appeared that the same notes in different octaves, like high C and middle C, didn’t sound alike to the Tsimané as they did to people in the U.S.

The researchers acknowledged in the study that the results might reflect differences in how people sing, and not in how people perceive pitch. But they argued that the totality of collected data, including some more direct measures of octave perception, put the weight of evidence on the side of a perceptual explanation. The Tsimané have shown perceptual differences before: In an earlier study by McDermott and his colleagues, the Tsimané rated dissonant combinations of pitches, which Western listeners find grating, to be just as pleasant as more consonant chords.

Moreover, if the Tsimané’s performance in the tests has more to do with singing ability than their perceptual experience, then it would mean that all people have absolute pitch—an idea that is not well supported experimentally, according to McDermott and his colleagues. Instead, the researchers speculate that the brain’s default approach to identifying pitch is based on relative differences between notes, while absolute pitch, which can help with recognizing notes scattered across octaves, is something learned through experience. They suggest that Tsimané have generally not had those experiences.

The Tsimané have unusual musical habits, usually performing songs solo and without instruments. In cultures that sing and play music with multiple parts, the musicians often shift melodies and notes across octaves to include different vocal ranges and instruments. In the view of some experts, the absence of those practices among the Tsimané might provide a foundation for the development of octave equivalence.

When Patrick Savage, the director of the CompMusic Lab at Keio University, heard about the team’s results, “I was very surprised,” he said. He scoured the research literature for other ways to explain the findings but came up empty. “I think they’re right.”

Neuroscience has offered few concrete ideas about how octave equivalence might operate in the brain, but the physical basis for octaves made it seem credible to many researchers that our perception of them might be hard-wired into the auditory cortex. Results from the Tsimané, however, indicate that this system may develop differently based on cultural experience, suggesting that the brain’s auditory processing system is more malleable than expected.

The results mesh well with a long tradition of ethnographic research illuminating the many ways music differs across cultures. “If you go around the world and you ask people about the music in their own culture, people often think that it’s somehow natural,” Margulis said. Studies like this one help to underscore the role of life experience in even our basic senses, she added.

That would include our development of a sense of octave equivalence. “You really have to be exposed to this—in a way, trained—to attune your brain to this idea that both are the same note,” said Eduardo Undurraga, an assistant professor of government at the Pontifical Catholic University of Chile and a co-author of the study.

“Music cognition is by definition some kind of a product of culture, and at the same time it relies on our auditory system,” says Nori Jacoby of Max Planck Institute for Empirical Aesthetics.

Ji Chul Kim, a postdoctoral fellow at the University of Connecticut’s Music Dynamics Laboratory, likened the process to his immersion in English when he moved from South Korea. Initially, he could tell that English vowels, especially as voiced by American speakers, were not what he had grown up with, but he couldn’t even categorize the perceived differences. With exposure and experience, he found that identifying and replicating the sounds became automatic. The Tsimané study points to a similar kind of learning, only with octaves instead of vowels. “It’s a very important building block in our understanding of how cultures develop. Not just musical culture—how cultures develop, and then how individuals within that culture develop their abilities,” Kim said.

Research with more cultures is needed, Savage said. Comparisons of just two cultures can establish that certain features of perception aren’t universal, but there is far more to learn as researchers unravel how biology interacts with experience.

Finding opportunities for such cross-cultural studies and conducting them properly can be challenging, however. Technology and commerce make Western culture almost universally pervasive; groups like the Tsimané who are somewhat insulated against it are extremely rare. Moreover, the history of scientific studies involving isolated tribes and other outsider cultures is fraught with ethical and scientific issues; Margaret Mead’s flawed studies of the Samoan people almost a century ago are only one example. (To help avoid problems with misunderstanding and exploitation, McDermott’s team hired local interpreters to explain the tasks and compensated the singing volunteers with goods like fishing line.) But there are few alternatives to these comparisons for scientists hoping to understand how much of our behavior and perception is innate.

Though often pitted against each other as nature versus nurture, biology and experience are actually deeply entwined, and music provides a scientifically revealing intersection of the two. “Music cognition is by definition some kind of a product of culture, and at the same time it relies on our auditory system,” said Nori Jacoby, research group leader at the Max Planck Institute for Empirical Aesthetics and lead author of the study. More data will help clarify this circular relationship, he added. “The picture we’ll find is much more nuanced.”

Lead image: In the village of Mara in the Bolivian rainforest, a Tsimané man demonstrates a locally made violin-like instrument. In the traditions of the most isolated of the Tsimané, however, people do not usually play musical instruments or sing together. Recent research suggests that their culture may affect their perception of musical tones. Credit: Eduardo A. Undurraga