Physicists Pin Down Nuclear Reaction From Moments After the Big Bang

The newly-measured rate of a key nuclear fusion process from the Big Bang matches the picture of the universe 380,000 years later. 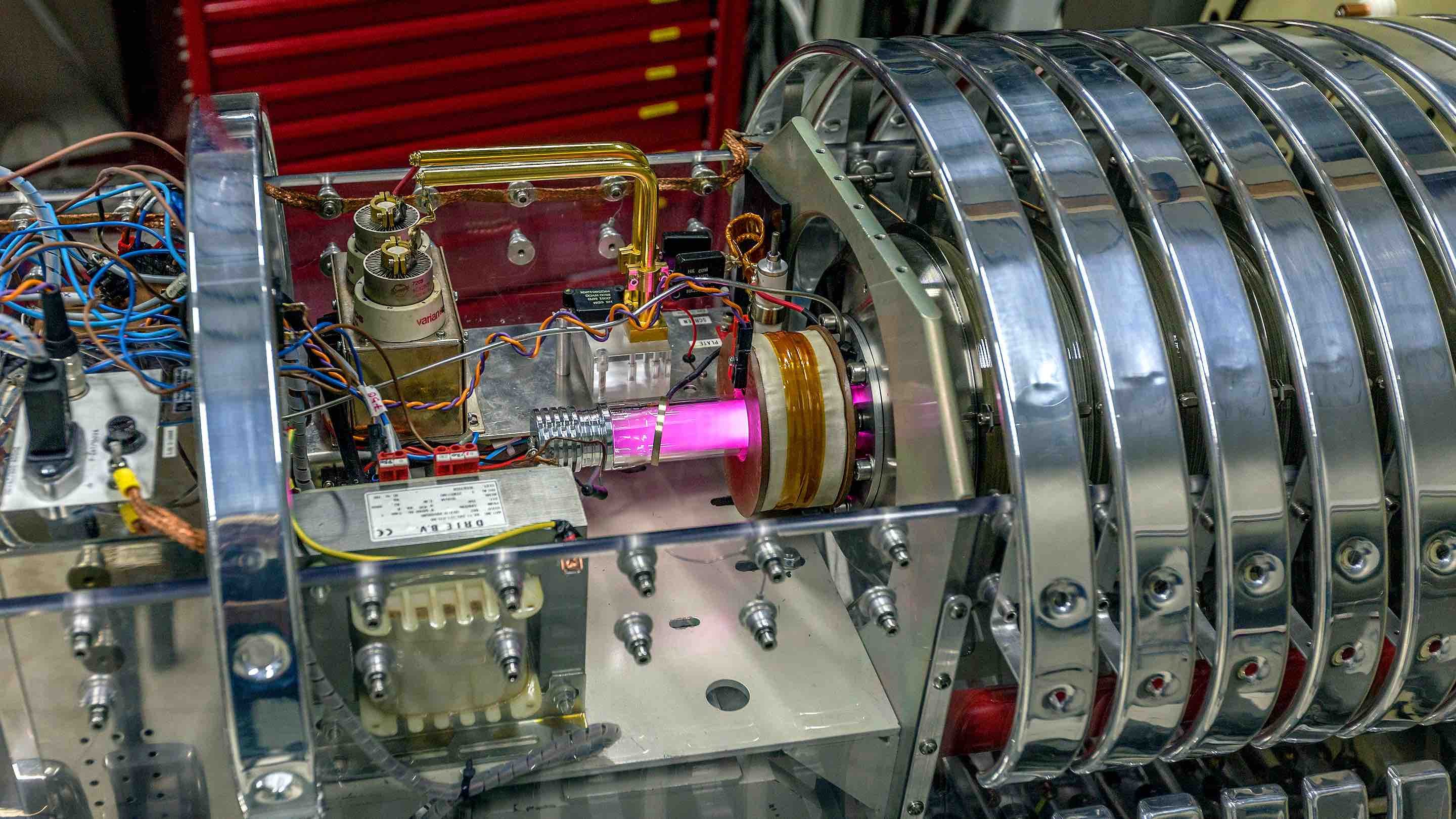 In a secluded laboratory buried under a mountain in Italy, physicists have re-created a nuclear reaction that happened between two and three minutes after the Big Bang.

Their measurement of the reaction rate, published on November 11, 2020 in Nature, nails down the most uncertain factor in a sequence of steps known as Big Bang nucleosynthesis that forged the universe’s first atomic nuclei.

Researchers are “over the moon” about the result, according to Ryan Cooke, an astrophysicist at Durham University in the United Kingdom who wasn’t involved in the work. “There’ll be a lot of people who are interested from particle physics, nuclear physics, cosmology and astronomy,” he said.

The reaction involves deuterium, a form of hydrogen consisting of one proton and one neutron that fused within the cosmos’s first three minutes. Most of the deuterium quickly fused into heavier, stabler elements like helium and lithium. But some survived to the present day. “You have a few grams of deuterium in your body, which comes all the way from the Big Bang,” said Brian Fields, an astrophysicist at the University of Illinois, Urbana-Champaign.

The precise amount of deuterium that remains reveals key details about those first minutes, including the density of protons and neutrons and how quickly they became separated by cosmic expansion. Deuterium is “a special super-witness of that epoch,” said Carlo Gustavino, a nuclear astrophysicist at Italy’s National Institute for Nuclear Physics.

But physicists can only deduce those pieces of information if they know the rate at which deuterium fuses with a proton to form the isotope helium-3. It’s this rate that the new measurement by the Laboratory for Underground Nuclear Astrophysics (LUNA) collaboration has pinned down.

The Earliest Probe of the Universe

Deuterium’s creation was the first step in Big Bang nucleosynthesis, a sequence of nuclear reactions that occurred when the cosmos was a super hot but rapidly cooling soup of protons and neutrons.

Starting in the 1940s, nuclear physicists developed a series of interlocking equations describing how various isotopes of hydrogen, helium and lithium assembled as nuclei merged and absorbed protons and neutrons. (Heavier elements were forged much later inside stars.) Researchers have since tested most aspects of the equations by replicating the primordial nuclear reactions in laboratories.

In doing so, they made radical discoveries. The calculations offered some of the first evidence of dark matter in the 1970s. Big Bang nucleosynthesis also enabled physicists to predict the number of different types of neutrinos, which helped drive cosmic expansion.

Since about 2011, uncertainty about deuterium’s likelihood of absorbing a proton and turning into helium-3 has fogged up the picture of the universe’s first minutes. Most importantly, the uncertainty has prevented physicists from comparing that picture to what the cosmos looked like 380,000 years later, when the universe cooled enough for electrons to begin orbiting atomic nuclei. This process released radiation called the cosmic microwave background that provides a snapshot of the universe at the time.

“You’re simulating the Big Bang in the lab in a controlled way,” said Brian Fields.

Cosmologists want to check whether the density of the cosmos changed from one period to the other as expected based on their models of cosmic evolution. If the two pictures disagree, “that would be a really, really important thing to understand,” Cooke said. Solutions to stubbornly persistent cosmological problems—like the nature of dark matter—could be found in this gap, as could the first signs of exotic new particles. “A lot can happen between a minute or two after the Big Bang and several hundred thousand years after the Big Bang,” Cooke said.

But the all-important deuterium reaction rate that would allow researchers to make these kinds of comparisons is very difficult to measure. “You’re simulating the Big Bang in the lab in a controlled way,” said Fields.

Physicists last attempted a measurement in 1997. Since then, observations of the cosmic microwave background have become increasingly precise, putting pressure on physicists who study Big Bang nucleosynthesis to match that precision—and so allow a comparison of the two epochs.

In 2014, Cooke and co-authors precisely measured the abundance of deuterium in the universe through observations of faraway gas clouds. But to translate this abundance into a precise prediction of the primordial matter density, they needed a much better measure of the deuterium reaction rate.

Confounding the situation further, a purely theoretical estimate for the rate, published in 2016, disagreed with the 1997 laboratory measurement.

“It was a very confused scenario,” said Gustavino, who is a member of the LUNA collaboration. “At this point I became pushy with the collaboration … because LUNA could measure this reaction exactly.”

Part of the challenge in measuring how readily deuterium fuses with a proton is that, under laboratory conditions, the reaction doesn’t happen very often. Every second, the LUNA experiment fires 100 trillion protons at a target of deuterium. Only a few a day will fuse.

Adding to the difficulty, cosmic rays that constantly rain down on Earth’s surface can mimic the signal produced by deuterium reactions. “For this reason, we’re in an underground laboratory where, thanks to the rock cover, we can benefit from cosmic silence,” said Francesca Cavanna, who led LUNA’s data collection and analysis along with Sandra Zavatarelli.

Over three years, the scientists took turns spending weeklong shifts in a lab deep inside Italy’s Gran Sasso mountain. “It’s exciting because you really feel you are inside the science,” Cavanna said. As they gradually collected data, pressure mounted from the wider physics community. “There was a lot of anticipation; there was a lot of expectation,” said Marialuisa Aliotta, a team member.

As it turns out, the team’s newly published measurement may come as a disappointment to cosmologists looking for cracks in their model of how the universe works.

The measured rate—which says how quickly deuterium tends to fuse with a proton to form helium-3 across the range of temperatures found in the epoch of primordial nucleosynthesis—landed between the 2016 theoretical prediction and the 1997 measurement. More importantly, when physicists feed this rate into the equations of Big Bang nucleosynthesis, they predict a primordial matter density and a cosmic expansion rate that closely square with observations of the cosmic microwave background 380,000 years later.

“It essentially tells us that the standard model of cosmology is, so far, quite right,” said Aliotta.

That in itself squeezes the gap that next-generation models of the cosmos must fit into. Experts say some theories of dark matter could even be ruled out by the results.

That’s less exciting than evidence in favor of exotic new cosmic ingredients or effects. But in this era of precision astronomy, Aliotta said, scientists proceed “by making small steps.” Fields agreed: “We are constantly trying to do better on the prediction side, the measurement side and the observation side.”

On the horizon is the next generation of cosmic microwave background measurements. Meanwhile, with deuterium’s behavior now better understood, uncertainties in other primordial nuclear reactions and elemental abundances become more pressing.

A longstanding “fly in the Big Bang nucleosynthesis ointment,” according to Fields, is that the matter density calculated from deuterium and the cosmic microwave background predicts that there should be three times more lithium in the universe than we actually observe.

“There are still lots of unknowns,” said Aliotta. “And what the future will bring is going to be very interesting.”

Lead image: Physicists at the Laboratory for Underground Nuclear Astrophysics in Italy shot a beam of protons (pink) at a deuterium target and measured the fusion rate. Credit: Yuri Suvorov