The astronomers Michel Mayor and Didier Queloz won half of the prize for their 1995 discovery of a Jupiter-like planet orbiting a nearby star. The cosmologist James Peebles won the other half for work exploring the structure of the universe. 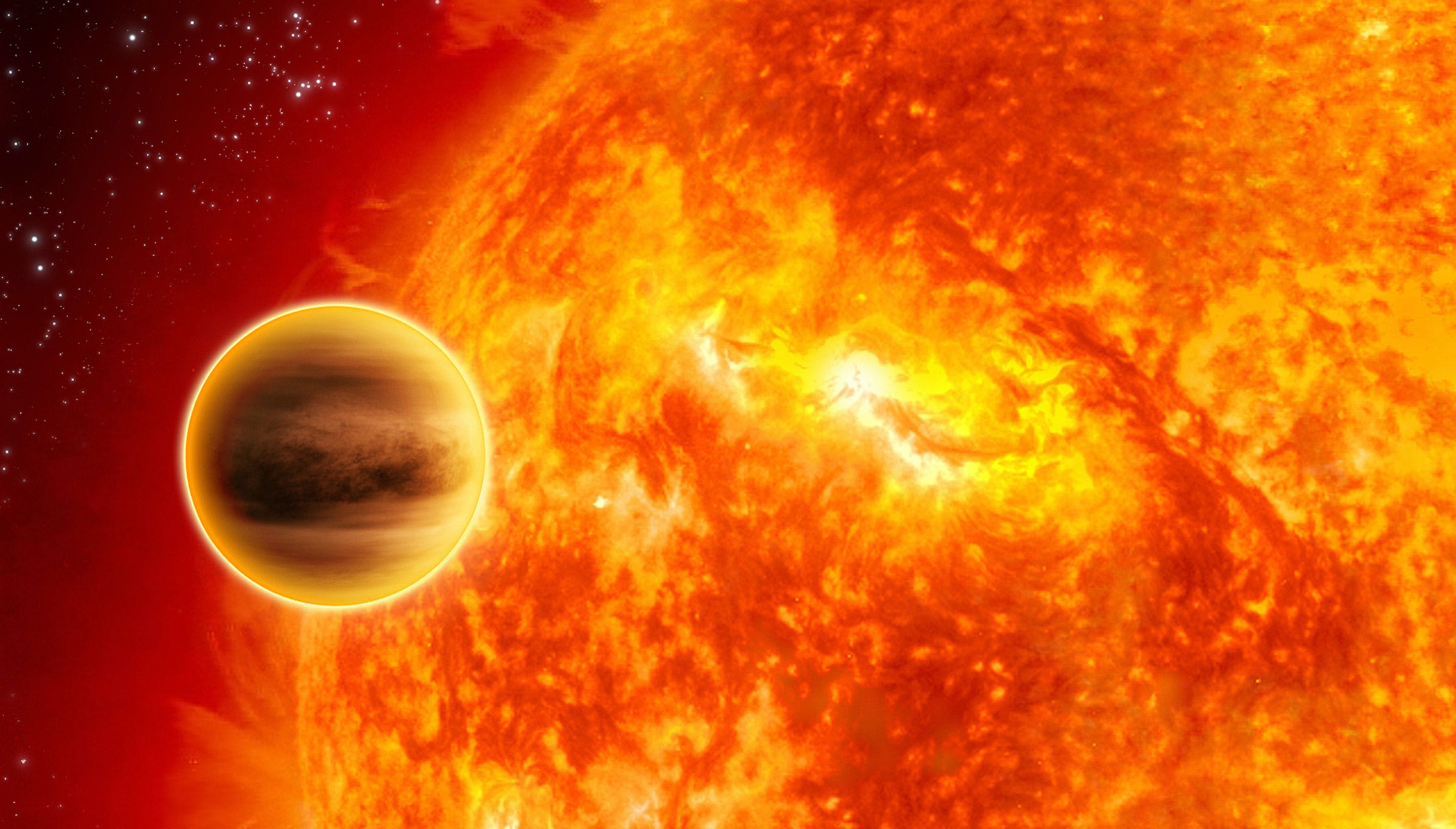 The origin of the universe and humanity’s place within it shared the spotlight during today’s announcement of the Nobel Prize in Physics. James Peebles, a physicist at Princeton University, won half of the prize for his contributions to physical cosmology, while Michel Mayor, a physicist at the University of Geneva, and Didier Queloz, an astronomer at Geneva and at the Cavendish Laboratory in Cambridge, shared the other half for the 1995 discovery of an exoplanet orbiting a sunlike star.

When Peebles began his career at Princeton in the early 1960s, there was little evidence for the Big Bang theory, the idea that the expanding universe could be extrapolated back in time to a small, hot, dense state. Then in 1965, Arno Penzias and Robert Wilson discovered the cosmic microwave background (CMB)—ancient light emitted when the universe was 380,000 years old. The CMB provides a snapshot of the young universe, revealing a smooth, hot, simple place. Peebles later recalled his mentor, Robert Dicke, who “told me with a wave of his hand, ‘Why don’t you go think about the theory,’” said Peebles. “And I’ve been doing it ever since.”

Peebles teased information about the origin and contents of the universe from the CMB, helping to lead theoretical cosmology into a new, rigorous age. In 1965, shortly after Penzias and Wilson’s discovery, Peebles, Dicke and two colleagues laid out the basic explanation of what the CMB is and how it relates to the Big Bang. They argued that the light had propagated through space almost since the beginning, growing fainter and less energetic over time as the expansion of space stretched it out. From the energy of these photons today, they could infer an early-universe temperature of more than 10 billion degrees Celsius.

In that hot early epoch, pairs of electrons and pairs of neutrinos would have spontaneously materialized, leading to the synthesis of protons and neutrons and—when these protons and neutrons came together—to the creation of atomic nuclei. In 1966, Peebles made detailed calculations of the abundances of different isotopes that would have been produced in this process, known as Big Bang nucleosynthesis.

He calculated the relative amounts of deuterium, helium-3 and helium-4 by inferring the primordial density of neutrons and protons from the temperature of the CMB. However, this CMB-based estimate differed from what astronomers have observed in the present-day universe. The discrepancy indicated that crucial ingredients might have been missing. As both theory and observation of the CMB improved, Peebles and other theorists grew confident that the early density of protons and neutrons paled next to that of a different kind of matter, now known as dark matter, that did not readily interact except through gravity.

Later, in the 1970s, Peebles pioneered the theory of cosmic structure formation, which describes how the subtle hot spots and cold spots seen in the CMB evolved into the galaxies and voids in the present-day universe. He went on to make major contributions to the theory of cosmic inflation, a posited period of exponential expansion at the start of the Big Bang, as well as increasing our understanding of dark energy—repulsive energy that is thought to infuse space itself.

“Jim is one of the true giants in the field,” wrote Paul Steinhardt, Peebles’ colleague at Princeton, in an email. “His work transformed our understanding of the hot, expanding universe from qualitative to precise, revealed the existence of dark matter, and pointed out the puzzles that remain.”

While one half of this year’s physics prize honored Peebles’ work on large-scale questions about the universe, the other half went to researchers who transformed our understanding of our own place within the cosmos and our sense of the uniqueness—or not, as the case may be—of our planetary home.

By 1995, astronomers had already spent a number of fruitless years searching for planets around distant stars. Prospects for discovery looked grim. Planets are dim and stars are bright, so researchers had to find a way to use starlight to reveal a planet hidden nearby.

The method they settled on aimed to make use of the planet’s presumptive pull on the star itself. If a planet were to orbit a star, they would both spin around their common center of gravity. Since stars are so much more massive than planets, this center of gravity would be very close to the center of the star, and so the star should move only a little bit. But perhaps a little bit would be enough.

If observers were to peer at this star’s orbit edge on, they would see it move toward them and then away from them as the planet circled at a distance. Just as the pitch of an ambulance siren grows higher on approach and lower when it’s moving away, the light from the star should also shift to higher and lower frequencies as the star moves back and forth in space.

Yet no one knew if it would be possible to measure such a subtle shift. Consider that if a distant alien civilization wanted to detect the presence of Jupiter by looking at our own sun in this way, it would have to detect a tiny change in the sun’s motion—a variance in speed of just 13 meters per second stretched out over the course of 12 years, the amount of time it takes Jupiter to make one orbit.

One way to help speed up the search was to look closely at many stars at once. With this in mind, Mayor and Queloz built a new type of spectrograph—a device used to precisely measure the frequencies of light coming from a star. This new spectrograph, called Elodie, allowed them to simultaneously measure the light coming from 142 stars. Using it, they detected a periodic shift in the light coming from the star 51 Pegasi, a sunlike star in the constellation Pegasus. The length of the period, and thus the time it took for the presumed planet to circle around its host star, was just four days, far less than expected. But the short period allowed them to observe many cycles, and that allowed other astronomers to confirm the discovery in relatively short order.

That finding revealed a previously hidden dimension to the universe. Mayor and Queloz showed that our solar system was not unique, that other planetary systems were out there waiting to be discovered. “The Mayor and Queloz discovery started off the field of exoplanets,” said Sara Seager, an astrophysicist and planetary hunter at the Massachusetts Institute of Technology. “It’s that simple.”

Minds and money quickly poured into the search. The exoplanet-hunting space telescope Corot launched in 2006, followed by Kepler in 2009 and TESS in 2018. The tally of known exoplanets currently stands at more than 4,000. They range from Earth-like rocks to Jupiter-dwarfing giants. Some have their own atmospheres. Others have water. Their numbers and variety have forced astronomers to rewrite the rules of how planets get made. Astronomers now estimate that planets outnumber stars—with hundreds of billions in our galaxy alone.

At first glance, today’s Nobel seems to honor two very different achievements. The award to Peebles is for work exploring the structure of the universe as a whole. Mayor and Queloz, by contrast, found a Jupiter-like planet around a nearby star. But these discoveries mark two profound shifts that have taken place over the past 50 years. The first is the creation of the first truly scientific and quantitative story of how we got here. The second is the stunning reconsideration of where, exactly, we are.

Lead image: An illustration of 51 Pegasi, the first planet to be discovered orbiting a sunlike star. Credit: NASA/JPL-Caltech