Planet Nine Is Put on Trial in Absentia

Breathless media coverage notwithstanding, the cases for and against a hypothetical Planet Nine in the outskirts of the solar system remain inconclusive. 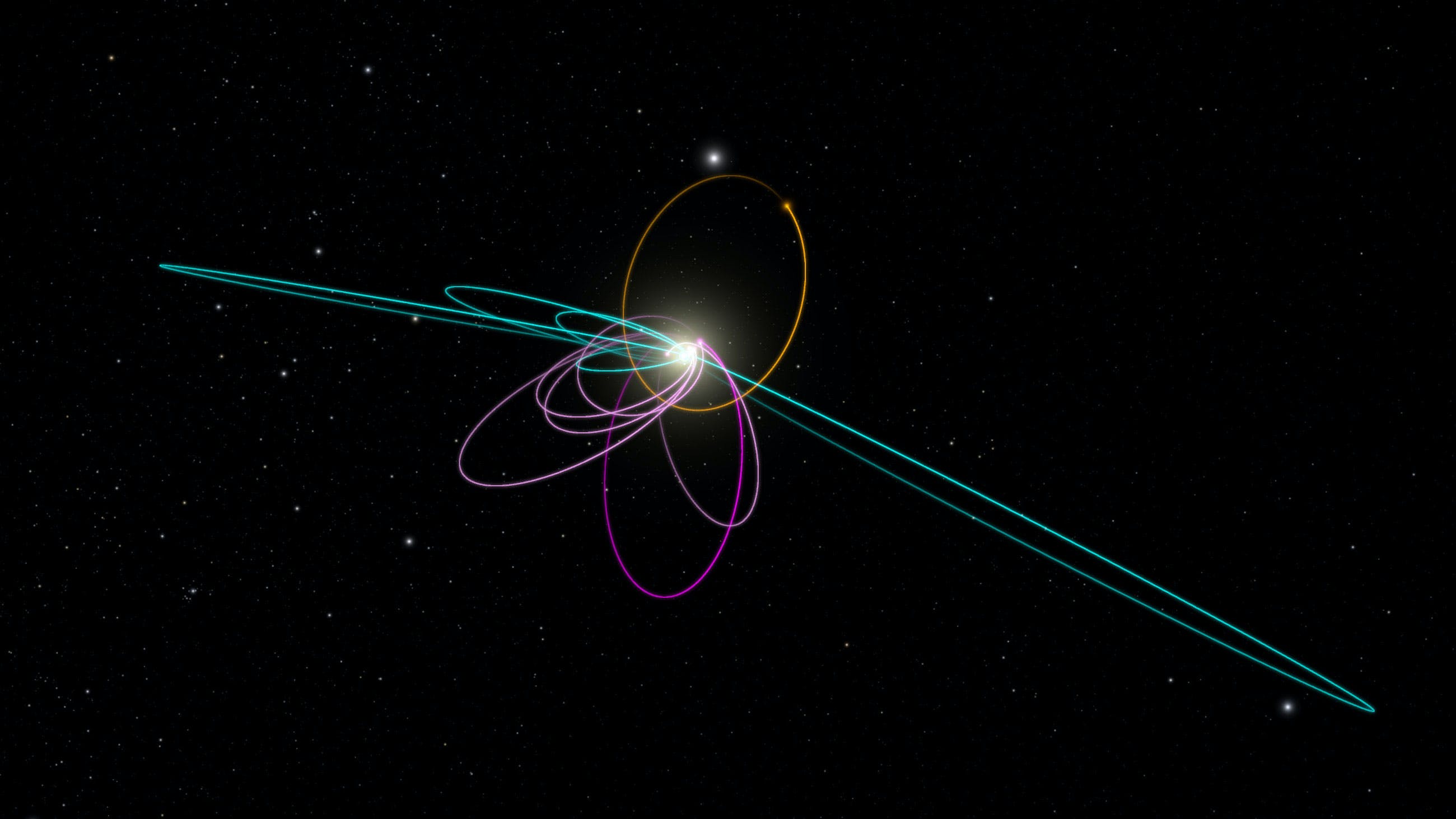 Pluto was stripped of its planetary status in 2006 thanks to a discovery by the astronomer Mike Brown, leaving our solar system with eight planets and stirring public outrage on behalf of the downgraded “dwarf planet.” A decade later, Brown, along with fellow California Institute of Technology astronomer Konstantin Batygin, reappeared in the news touting evidence of a genuine ninth planet that is 10 times the mass of Earth (and 5,000 times heavier than Pluto) but that, they argued, orbits the sun so distantly that centuries of telescope observations have missed it.

Invoking an unseen planet to explain astronomical puzzles is “what you do when you’ve exhausted absolutely every other explanation,” Batygin said; he and Brown made the case for “Planet Nine” after multiple puzzles pointed inexorably in the same direction. The first line of evidence was a strange cluster of six objects in the Kuiper belt—the icy region at the outskirts of the solar system that is home to Pluto. The six objects are clustered in their orbits and lie roughly in the same plane—a coincidence with an estimated 0.01 percent probability of happening by chance.

Two years ago, after ruling out alternative possibilities, Batygin decided to see what other consequences would arise if these clustered objects were tracking the gravity of an unseen planet. His supercomputer simulations showed that if such a planet existed, there should be a second population of objects in an orbit perpendicular to the planet’s orbital plane. When Batygin, a theorist, showed the result to Brown, an observational astronomer who worked down the hall, Brown knew that just such a population of sideways-orbiting Kuiper belt objects had been discovered in a recent asteroid survey. The agreement between the data and simulations was “staggering,” Batygin said. “Not only were these Kuiper belt objects that are orbiting on their side discovered, but they were discovered exactly where they were expected to be.”

Batygin and Brown went public with their Planet Nine hypothesis on that basis in January 2016. Soon, additional circumstantial evidence emerged: Batygin’s simulations indicated that Neptune should occasionally capture and “circularize” some of the sideways-orbiting objects associated with Planet Nine, and indeed, a population of objects with circular orbits have been found in the vicinity of Neptune. In July, Batygin, Brown, and Elizabeth Bailey showed that Planet Nine’s presence could also exactly account for the 6-degree tilt of the sun with respect to the plane of the inner planets—a 150-year-old mystery.

Planets are dim, and this one, if it exists, is currently nearly 100 billion miles from the sun, somewhere in the region of sky below Orion’s shield. Batygin and Brown have searched a small part of this region so far and are planning to cover more ground during an observing window this fall. Other groups are hunting for the missing planet, too.

However, news headlines last week seemed to dash hopes for Planet Nine. Using the results of the Outer Solar System Origins Survey (OSSOS), a recently completed, four-year telescope survey that discovered more than 800 objects beyond the orbit of Neptune, Cory Shankman of the University of Victoria in Canada and colleagues claim to have found no evidence of orbital clustering due to Planet Nine, at least not once they account for their survey’s observation bias (the looking-for-lost-keys-under-the-streetlight effect). The paper has just been accepted for publication in The Astronomical Journal.

However, Brown and Batygin argue that the OSSOS results can be interpreted as good, or at the very least inconclusive, for the Planet Nine hypothesis.

OSSOS identified four objects in the region of interest, two of which have orbits that are aligned opposite to the orbit of the hypothetical Planet Nine, just like the clustered objects that originally gave rise to the Planet Nine hypothesis. The third object’s orbit is aligned with the orbit of Planet Nine—another prediction of the hypothesis—and the fourth newfound object is an outlier. After accounting for the preference that their survey gives to certain orbital orientations, Shankman and colleagues conclude that this sample could actually reflect a random underlying distribution of orbits. They speculate that previous evidence of clustering is probably also due to unaccounted-for biases.

“They demonstrate nicely that their survey is strongly biased. I would 100% agree; they look in limited places in the sky, that makes biases,” Brown—alias @PlutoKiller—wrote on Twitter. But it’s wrong, he continued, to “make the leap to say that therefore it is probably true that NO survey is good for understanding . . . clustering.” According to both Batygin and Brown, other surveys simply do not suffer from the same drawbacks as OSSOS because they typically have much larger sky coverage. And Brown showed in a recent paper that the combination of previous surveys actually does a good job of eliminating biases that are present in individual surveys.

The OSSOS paper argues that all surveys will be biased because weather patterns affect observations. But Batygin counters that if the observed clustering of distant objects was due to weather alone, “we would expect to see similar clustering in more proximate Kuiper belt objects as well, and we simply don’t.”

As for the outlier that showed up in the OSSOS survey, even it might not be as damaging to Planet Nine’s prospects as originally thought. If the planet exists, then along with the clusters of objects expected to be aligned in specific directions, there should also be objects spanning the full 0-to-360-degree range of orientations at a series of orbital radii that correspond to the planet’s orbital resonances. In the days since Shankman and colleagues’ paper appeared, Batygin has fed the purported outlier through his models and found that, “remarkably, the outlier falls exactly on one such orbit.”

“All in all, I’m just not that worried,” Batygin said. “I’m still going to the telescope this fall with Mike to look for Planet Nine.” Unlike many academic arguments, this one has a well-defined resolution, he said. “We’ll know the answer in less than a decade.”

Lead image: Kuiper belt objects with clustered orbits that are in the plane (pink) and perpendicular to the plane (aqua) of the hypothetical Planet Nine (orange). Credit: Caltech/R. Hurt (IPAC)