In grafted plants, shrunken chloroplasts can jump between species by slipping through unexpected gateways in cells walls. 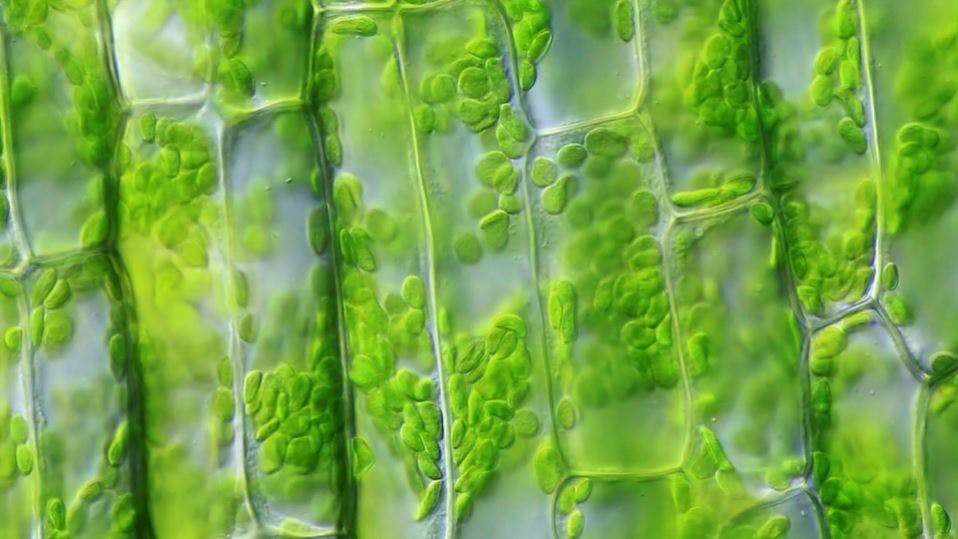 More than a decade ago, plant geneticists noticed something peculiar when they looked at grafted plants. Where two plants grew together, the cells of each plant showed signs of having picked up substantial amounts of DNA from the other one.

In itself, that wasn’t unprecedented, because horizontal transfers of genes are not uncommon in bacteria and even in animals, fungi and plants. But in this case, the transferred DNA seemed to be the entire intact genomes of chloroplasts. This posed a conundrum, because plant cells seal themselves inside a protective cell wall that offers no obvious way for so much DNA to get in.

Now, researchers in Ralph Bock’s laboratory at the Max Planck Institute of Molecular Plant Physiology in Potsdam have finally discovered the answer by capturing this transfer on video. Not only are cell walls sometimes more porous than was thought, but plants seem to have developed a mechanism that enables whole organelles to crawl through the cell wall into adjacent cells. The researchers reported their discovery in the January 1, 2021 issue of Science Advances.

“The real novelty is that they’ve shown the actual physical organelle is moving, [and] not only from one cell to another,” said Charles Melnyk, a plant biologist who studies grafting at the Swedish University of Agricultural Sciences in Uppsala. “It’s two different plants that are exchanging organelles.”

Unexpected Holes in the Walls

Farmers have used plant grafts since at least the days of ancient Rome to grow fruit trees and grapevines. Grafting a scion—the flowering, fruiting part of a plant—onto established rootstock can help young fruit trees or vines bear fruit earlier and improve their resistance to pests and disease. Grafting occurs in nature, too, when closely related plants that touch each other eventually fuse, or when parasitic plants form connections to their hosts. At the graft site, the plants form a kind of scar, or callus, that reestablishes the flow of water and nutrients through vascular tissues across the wound and sometimes gives rise to new shoots.

About a decade ago, Bock and his team grafted together two species of tobacco plants and sequenced genes from both sides of the callus. They found that the whole genomes of chloroplasts had been exchanged between the rootstock and the scion. (Like mitochondria, chloroplasts and the other plant organelles called plastids are remnants of ancient endosymbiotic bacteria and carry their own genetic material.) In fact, the entire 150-kilobase chloroplast genomes had been transferred intact, not as naked DNA fragments haphazardly recombined among other genes. Accidental hybridizations or viral infections, which cause many horizontal transfers, couldn’t accomplish this.

“This is not what you would expect from a plant cell,” said Pal Maliga, a plant scientist at Rutgers University who has independently found genetic evidence for the transfers of chloroplasts and mitochondria inside grafts. Plant cells are armored with a stiff cell wall, so “my image of a plant cell was the cytoplasm sitting in a cage, and nobody goes anywhere,” Maliga said.

The genetic evidence for transfers posed a real puzzle: The only known openings in cell walls were the tiny plasmodesmata, narrow bridges (only about 0.05 microns wide) that allow adjacent plant cells to exchange proteins and RNA molecules. The chloroplast, typically about 5 microns in diameter, “was way too big to move” through those, Maliga said. “It looked like it miraculously showed up in the other cell.”

The mystery persisted until Bock teamed up with his postdoctoral fellow Alexander Hertle, who had expertise in live-cell imaging and microscopy. Hertle was determined to look at what was going on in the callus. Examining thin sections of the graft with electron microscopy, he saw that the cells had openings larger than any previously seen. But even those, which were up to 1.5 microns across, seemed too narrow for the chloroplasts.

Then, while observing live cells in the callus, Hertle caught images of the chloroplasts in the act of migration. Some of the chloroplasts changed into more primitive, more motile proto-plastids that could get as small as 0.2 microns. As Hertle watched, the proto-plastids crawled along the inside of the cell membrane to positions beneath the newly discovered holes in the cell wall. Budlike protrusions of the cell membranes then bulged into neighboring cells and delivered the organelles. As the tissue organization in the graft reestablished itself, the plastids returned to the normal size for chloroplasts.

“So there’s definitely holes in the cell wall that would allow the plastids to move through,” Hertle said. The dogma that a plant cell wall is a thick, more or less permanent barrier “basically disappears with this study.”

The metamorphosis of the chloroplasts isn’t well understood yet, but it seems to be a response to carbon starvation and less photosynthesis, Hertle explained. When the researchers turned off the lights, they observed that more plastids dedifferentiated, and the frequency of organelle transfer increased fivefold.

How well the transferred plastids function in their new host cells depends on how closely related the two species are, Maliga says. If the genetic mismatch with the nuclear DNA is too extreme, the organelles may fail to work and will eventually be lost. But they could thrive in the cells of close relatives.

Maliga suspects the proto-plastids might contain or produce signaling molecules that help the graft wound heal. The large openings that form in the cell walls also seem to be part of the plant’s emergency healing response to the wound at the graft site, but they may occur during some stage of normal plant development as well, Maliga says.

Whole-organelle migration could help explain the observation that the chloroplasts from clumps of different species of beech tree growing near one another have more genetic similarities than chloroplasts from more widely spaced assemblages of beeches, Hertle says. The chloroplast-capture events also explain why researchers sometimes get inconsistent results when reconstructing the evolutionary histories of plants: Nuclear and chloroplast genomes may have different pedigrees.

It’s not clear yet how frequently this kind of horizontal genome transfer through organelle migration occurs in nature. Perhaps plants move chloroplasts between cells routinely in response to injuries or other events; no one knows. Bock, Maliga and other researchers were able to document genome transfers only because the differences in the grafted tissues gave away what was happening. But if plants have evolved a mechanism for organelle transfers, then relatively rare natural grafting events may be only one occasion for them.

Common or not, the phenomenon might have evolutionary or ecological implications. Hertle points out that once a mosaic cell in a graft callus starts to produce roots, shoots and flowers, it could give rise to a new species or subspecies, especially if cell walls open wide enough to admit nuclear genomes. In 2014, Bock’s team used this method to create a new species in the nightshade family with a combination of nuclear and organelle genomes that could not have arisen from hybridization. If nature offers an easy way to transfer organelles between plants, biotechnology researchers can put it to work in creating desirable new crop species.

Although the potential applications are many, for Hertle nothing beats the joy of basic discovery. “The thing that is very interesting about microscopy science is that you see things that you would have never thought existed,” he said.