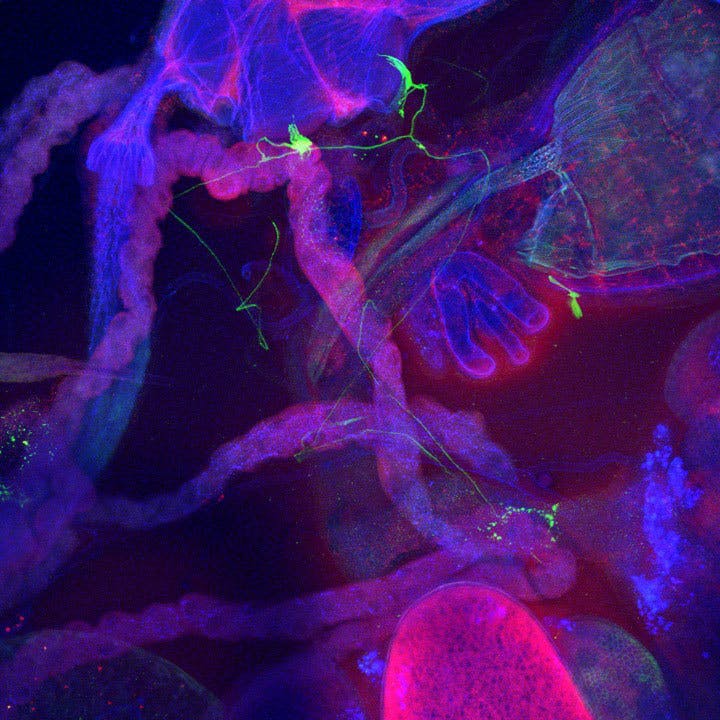 The perception and reactions to odors and tastes can change in pregnancy, sometimes dramatically. This is also true for flies. The mechanisms, however, that trigger these changes are not understood in either mammals or insects. Scientists from the Max Planck Institute of Neurobiology in Martinsried now succeeded in demonstrating that the concentration of a certain receptor increases in the sensory organs of gravid fruit fly females. As a result, the taste and odor of important nutrients, called polyamines, are processed differently in the brain: Pregnant flies favor nutrition that is rich in polyamines and increase their reproductive success in this way.

A pregnancy represents a huge challenge for the mother’s body. To provide optimal nutrition for the developing offspring, her nutrition must be adapted to the altered requirements. “We wanted to find out whether and how expectant mothers can sense the nutrients they need,” explains Ilona Grunwald Kadow, Research Group Leader at the Max Planck Institute of Neurobiology.

Polyamines are nutrients that can be produced by both the body itself and by intestinal bacteria. However, some of the polyamines needed must be obtained from food. With advancing age, the consumption of polyamines through food increases in importance, as the body’s own production declines. Polyamines play a role in numerous cell processes and a polyamine deficiency can have a negative impact on health, cognition, reproduction, and life expectancy. An excess of polyamines can also be harmful, however. The intake of polyamines should therefore be adapted to the body’s current needs.

The Max Planck neurobiologists now succeeded in demonstrating that, after mating, female fruit flies show a preference for food with a high polyamine content. A combination of behavioral studies and physiological tests revealed that the change in the appeal of polyamines to flies before and after mating is triggered by a neuropeptide receptor known as the sex peptide receptor (SPR) and its neuropeptide binding partner. “It was already known that the SPR boosts egg production in mated flies,” explains Ashiq Hussain, one of the study’s two first authors. “But we were surprised to discover that the SPR also regulates the activity of the sensory neurons that recognize the taste and smell of polyamines.”

Considerably more SPR receptors are integrated into the surfaces of the chemosensory neurons in pregnant females. This increase in neuropeptide signaling modifies the reaction of the sensory neurons to the odor and taste. The thereby intensified odor and taste perception thus occurs at a very early stage in the nervous system. The importance of the receptor became clear when the researchers increased the presence of SPRs in the olfactory and taste neurons of virgin females, using a genetic tool: This change was sufficient to enable the neurons of the virgin flies to react more strongly to polyamines, which ultimately resulted in a change of their preference. Like their mated species counterparts, virgins now preferred the polyamine-rich food sources.

The study demonstrated, for the first time, the existence of a mechanism through which pregnancy modifies specific chemosensory neurons and alters the perception of important nutrients and behavior toward them. “Because smell and taste are processed in a similar way in insects and mammals, a corresponding mechanism in humans could also ensure an optimal nutritional supply for the developing life,” presumes Habibe Üc̗punar, second first author of the study. In a concurrently published study, the scientists were also able to demonstrate how the important polyamines are actually sensed and evaluated by the fruit flies.

This article was originally published by Max Planck Neuroscience on May 4, 2016. The relevant study can be retrieved here.