Preserving a Sense of Wonder in DNA

A bold project codes human data into microbes that will survive for millions of years. 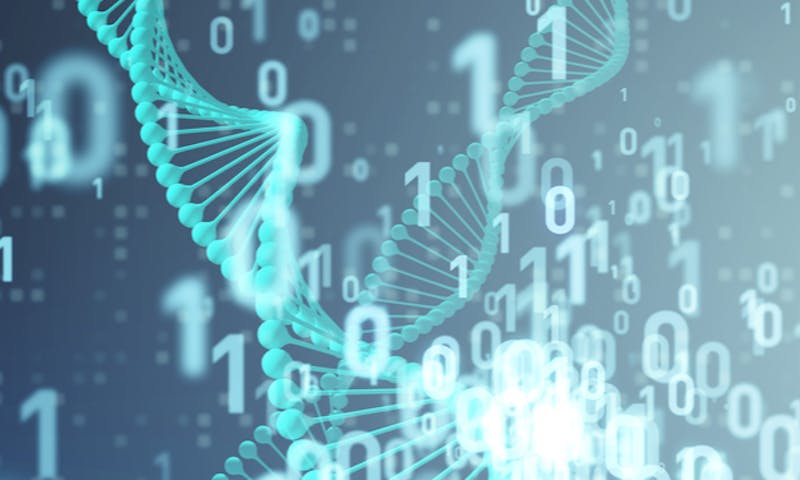 Not long ago, Joe Davis, the “artist-scientist” in George Church’s genetics lab at Harvard Medical School, was in Brittany, France. The region is known for thousand-year-old salterns that produce fleur de sel, or flower of salt—salt that forms as seawater evaporates. Davis was there sampling these brightly colored ponds with a microscope, and found in the shallow waters an abundance of diverse halophiles, organisms that can grow in and tolerate saline conditions. “I wondered what happens to these organisms,” he said. “The salt is evaporating, the water’s gone. The organisms aren’t just going to disappear. Where are they?”

Back in the United States, Davis procured a range of artisanal salts and sterilized them. The wizened 69-year-old, with a Gandalf-like demeanor and a do-it-yourself ethos, wants to preserve information for eternity. In 1986, he was the first to demonstrate that information could be stored in genes. Ones and zeros of digital information are mapped onto sequences of the four nucleic acids of DNA, synthesized, and inserted into cells. Scientists retrieve the DNA, sequence it, and with the proper index, read its coded instructions. Davis is encoding the top 50,000 Wikipedia pages into an apple gene, creating a perpetual tree of knowledge. Working with scientists at the Arecibo radio telescope in Puerto Rico, he beamed the genetic sequence for the most abundant protein on Earth, critical to photosynthesis, to nearby stars.

Davis learned the microbes were being entombed in the salt crystals—and could be cultured. It seemed strange to him that one of those salts was from close to the Himalayan Range, in Pakistan. The Himalayan salts, or halite as the mineral is called, were—if the provenance is authentic—ancient. These are salts that, based on geological, paleontological, and geochemical evidence, haven’t been re-dissolved and re-crystallized since their initial deposition. That implied that the pristine microbes that lay in the Himalayan salts were from the Permian to the Cambrian age. “That blew my mind,” Davis said. “Wait a minute, these can’t be from a quarter of a billion years ago.”

Davis has collected Permian salts, several hundred million years old, from mines in Germany and Austria, and salts from the deepest salt mines in New York, with the aim of knowing whether he could grow microbes from them. On this trip in France he may have rediscovered what a growing body of scientific literature had been suggesting for decades: That it may be possible to revive millions-of-years-old microbes. These microbes had been surviving in a desiccated state, not yet dead but having reduced their metabolism to the minimum, carrying out only what are called basal functions.

This means that, in some sense, these microbes opt out of natural selection. Microbes surviving for millions of years in deep dormancy upend evolution. They do not develop advantageous traits, which would require growth and division. Instead they become the equivalent of “seed banks.” Such ancient microbes exist entombed in salt crystals and at the bottom of the ocean, in oxygen-deficient, hydrogen sulphide-rich environments. Wading in the salterns, Davis realized he had found resilient biological carriers that could store genetic information across vast stretches of time.

From analyzing this core, you’re going from a modern environment all the way to an ancient environment.

In a 2020 paper, posted to bioRxiv in February, Davis and his colleagues propose that archives of digital information created by tinkering with DNA base pairs can be inserted into halophiles in vivo and preserved, intact, in crystalline mineral salts for “indefinite periods of time.”1 In September 2019, Davis exhibited a genetically modified Halobacterium salinarum—a particularly hardy microbe, hardier than E. coli—at an art biennal in Russia. The theme was “Immortality.” (“The discussion of immortality is a reason to talk about cultural memory, and about ways to keep human identity intact on the winding thread of life,” the program stated.) When Davis compared Hsal from ancient salts to contemporary samples grown from salterns, they were similar if not indistinguishable.

The mechanism the Hsal uses to protect itself from radiation is similar to Deinococcus radiodurans, a bacterium known for its radiation resistance. Each of Hsal’s cells carries 25 copies of its chromosome, which fragment and reassemble after a high radiation dosage. The Hsal cells have been shown to survive a dosage 18 times higher than the dosage that kills most E. coli cells, the digital-information carrying capacity of which Davis has also studied. Davis led a three-day workshop at the biennale, allowing participants the chance to create “the most stable and long-lived archive of messages from humankind, using salt from Tyretskoe deposit and message-bearing halophiles.”

Around the time Davis was in Russia, Terence McGenity, a microbiologist at the University of Sussex, and his students went down to another deep salt mine, the Boulby mine, the deepest mine in the United Kingdom. It has a dark matter laboratory located in it. “The salt cuts out a lot of cosmic radiation, and so you’re getting low background,” McGenity said. This is one way in which the Hsal protects itself. “They survive much better when they are entombed in halite.”

Hsal are known to inhabit fluid inclusions, pockets of liquid within the salt crystal. These hypersaline environments, pockets of brine from which the salt crystallized, are what cause the crystals to be cloudy. The Hsal’s enzymatic machinery is adapted to this saline environment, and so what causes the Hsal cells to burst is an unexpected antagonist: fresh water. It’s their “kryptonite,” as a Science news report put it.2 The cells need to maintain osmotic balance. There is a range with sea water, saline water, and freshwater, not an all-or-nothing. But fresh water is at the deadly end of that range. “You have a massive osmotic shock,” says McGenity. “… and pop, the cell bursts.”

In 1928, a University of California, Berkeley scientist named Chas Lipman suggested that he had discovered living microbes in pre-Cambrian rocks.3 Lipman’s investigations turned to anthracite coal derived from Wales and Pennsylvania, which he sterilized with Superoxol in a “hot oven” for more than two days at temperatures of 160 to 170 degrees Celsius. Lipman later claimed that “the microorganisms found in coal are actually survivors, imprisoned in the coal at the time it was formed, from material which originally was probably very rich in microorganisms since it was peat-like in nature.”

To find microorganisms in coal would be to find viable life in what is today called the Deep Biosphere. “The definitions of the Deep Biosphere are not universal but we tend to mean the habitat that is contained beneath the surface of the Earth,” said James Bradley, a geobiologist at Queen Mary University of London. Bradley argues that aspects of the marine biosphere, part of the larger deep biosphere such as marine sediments, are analogous to the salt crystal setting of the Hsal. Species here become trapped and buried in a severely energy-limited environment.

When we go beyond the top 10 centimeters where animals tend to be burrowing, there’s very little mixing and reworking of the marine sediments, he said. There are marine locations which have not had significant perturbations for millions of years.

These habitats are hard to mimic in the laboratory given their extreme energy limitations. Among the habitats that Bradley studies is the South Pacific Gyre. The crew of the ship JOIDES Resolution drilled a long vertical core from the gyre, wearing masks to protect themselves from the hydrogen sulphide gas the core emits. Such cores can be hundreds of meters long, taken up in sections.

If even a few of these zombie-like microbes survive across geological time it has deep implications for life in the solar system and beyond.

“From analyzing what is contained in this core, from the top of it to the bottom of it, you’re going from a modern environment, all the way to an ancient environment,” said Bradley. From the South Pacific gyre, the cores can date upward of 95 million years old.4 The hydrogen sulphide is a byproduct of metabolism. That this is measured is a “good indication we have living and breathing organisms that are surviving in this habitat,” he said. In a 2018 paper, writing about the Deep Biosphere, Bradley noted, “the fitness of a microorganism may not be determined by its growth, but rather its ability simply to stay alive.”5

He is particularly interested in understanding what the energy limits may be for such organisms. “That is a tough line to draw,” he said, “because the amount of energy that these organisms are processing is so close to zero.” There is an energetic shift from when organisms are in growth mode and move to maintenance mode, and then to what Bradley calls a “deeper state of dormancy.” He said, “It’s reduced its basal maintenance energy requirement to even lower than it was previously, where it was not growing.”

A human typically runs on 100 watts of power while an organism from the deep subsurface theoretically may run at about 10 to the power of -21 watts. “So that’s more than a hundred billion-billion, I’m not sure how many billions…” times lower than the power that a human runs on, he said. The -21 is a theoretical limit though, and Bradley estimates that organisms would be subsisting at a higher power threshold.

Bradley points to a surreal aspect. Experimentalists struggle to grow and culture these ancient organisms. To his knowledge, the time taken for them to revive has taken up to 1,000 days. For organisms that did not revive, it is possible that the variable that’s missing is not nutrients but time for the super-slow organisms to grow. “We might be testing conditions in the lab over too small a time scale,” he said.

While the majority of these zombie-like microbes may not be viable, if even a few survive across geological time it has deep implications for life in the solar system and beyond. Salty environments are thought to be aplenty. New observations suggest brine lakes exist near Mars’ South Pole.6 Halite has been found in Mars meteorites since at least the early 1980s. Europa, a moon of Jupiter, and Enceladus, a moon of Saturn, are other prime candidates with expected briny habitats. The dwarf planet Ceres, in the asteroid belt, is an active ocean world.7 Plumes from Enceladus may provide samples with a total mission time of only thirteen-and-a-half years.

Davis, who finds it convenient to keep the Hsal as salt crystals on a shelf, had named his Hsal art exhibit Koschei the Deathless, after an evil wizard in Russian folklore. Koschei is supposed to have hidden his evil soul in the tip of a needle concealed in an egg inside a duck that flies away when pursued. This thingamajig was then buried in a chest on an island that would appear and disappear with alternating tides.

Koschei inspired some of the objects that Davis and his team, relying on a technique called vector encoding, inserted into the Hsal DNA. They also stored a 3-D origami double helix and a 4-D hypercube known as a tesseract. The digital information carries a sense of wonder, poetically conjuring an ancient myth about immortality. In the preprint, there is a quote from Aristotle’s Poetics: “You have to reveal yourself to yourself before you can reveal yourself to anyone else.”

“I expected my colleagues to censor all my poetic comments but they loved it,” Davis said. He muses that if the Hsal can survive across geologic time, it could be harnessed for interstellar messaging. “A biological carrier would be permanent—hundreds of millions of copies, for hundreds of millions of receivers.”

Virat Markandeya is a science writer based in Delhi.

2. Nadis, S. Hardy microbe’s DNA could be a time capsule for the ages. Science sciencemag.org/news (2020).