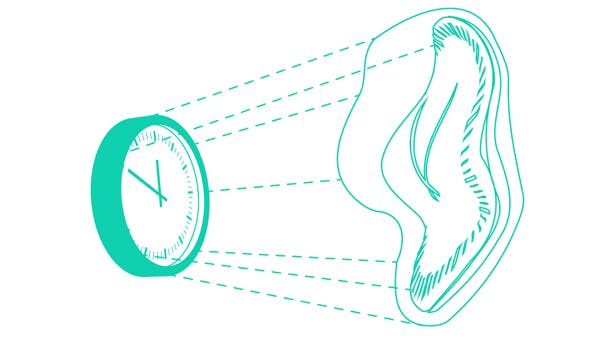 In quantum mechanics, time is universal and absolute; its steady ticks dictate the evolving entanglements between particles. But in general relativity (Albert Einstein’s theory of gravity), time is relative and dynamical, a dimension that’s inextricably interwoven with directions x, y and z into a four-dimensional “space-time” fabric. The fabric warps under the weight of matter, causing nearby stuff to fall toward it (this is gravity), and slowing the passage of time relative to clocks far away. Or hop in a rocket and use fuel rather than gravity to accelerate through space, and time dilates; you age less than someone who stayed at home.

Unifying quantum mechanics and general relativity requires reconciling their absolute and relative notions of time. Recently, a promising burst of research on quantum gravity has provided an outline of what the reconciliation might look like—as well as insights on the true nature of time.

As I described in an article this week on a new theoretical attempt to explain away dark matter, many leading physicists now consider space-time and gravity to be “emergent” phenomena: Bendy, curvy space-time and the matter within it are a hologram that arises out of a network of entangled qubits (quantum bits of information), much as the three-dimensional environment of a computer game is encoded in the classical bits on a silicon chip. “I think we now understand that space-time really is just a geometrical representation of the entanglement structure of these underlying quantum systems,” said Mark Van Raamsdonk, a theoretical physicist at the University of British Columbia.

Researchers have worked out the math showing how the hologram arises in toy universes that possess a fisheye space-time geometry known as “anti-de Sitter” (AdS) space. In these warped worlds, spatial increments get shorter and shorter as you move out from the center. Eventually, the spatial dimension extending from the center shrinks to nothing, hitting a boundary. The existence of this boundary—which has one fewer spatial dimension than the interior space-time, or “bulk”—aids calculations by providing a rigid stage on which to model the entangled qubits that project the hologram within. “Inside the bulk, time starts bending and curving with the space in dramatic ways,” said Brian Swingle of Harvard and Brandeis universities. “We have an understanding of how to describe that in terms of the ‘sludge’ on the boundary,” he added, referring to the entangled qubits.

The states of the qubits evolve according to universal time as if executing steps in a computer code, giving rise to warped, relativistic time in the bulk of the AdS space. The only thing is, that’s not quite how it works in our universe.

Here, the space-time fabric has a “de Sitter” geometry, stretching as you look into the distance. The fabric stretches until the universe hits a very different sort of boundary from the one in AdS space: the end of time. At that point, in an event known as “heat death,” space-time will have stretched so much that everything in it will become causally disconnected from everything else, such that no signals can ever again travel between them. The familiar notion of time breaks down. From then on, nothing happens.

On the timeless boundary of our space-time bubble, the entanglements linking together qubits (and encoding the universe’s dynamical interior) would presumably remain intact, since these quantum correlations do not require that signals be sent back and forth. But the state of the qubits must be static and timeless. This line of reasoning suggests that somehow, just as the qubits on the boundary of AdS space give rise to an interior with one extra spatial dimension, qubits on the timeless boundary of de Sitter space must give rise to a universe with time—dynamical time, in particular. Researchers haven’t yet figured out how to do these calculations. “In de Sitter space,” Swingle said, “we don’t have a good idea for how to understand the emergence of time.”

One clue comes from theoretical insights arrived at by Don Page and William Wootters in the 1980s. Page, now at the University of Alberta, and Wootters, now at Williams, discovered that an entangled system that is globally static can contain a subsystem that appears to evolve from the point of view of an observer within it. Called a “history state,” the system consists of a subsystem entangled with what you might call a clock. The state of the subsystem differs depending on whether the clock is in a state where its hour hand points to one, two, three and so on. “But the whole state of system-plus-clock doesn’t change in time,” Swingle explained. “There is no time. It’s just the state—it doesn’t ever change.” In other words, time doesn’t exist globally, but an effective notion of time emerges for the subsystem.

A team of Italian researchers experimentally demonstrated this phenomenon in 2013. In summarizing their work, the group wrote: “We show how a static, entangled state of two photons can be seen as evolving by an observer that uses one of the two photons as a clock to gauge the time-evolution of the other photon. However, an external observer can show that the global entangled state does not evolve.”

Other theoretical work has led to similar conclusions. Geometric patterns, such as the amplituhedron, that describe the outcomes of particle interactions also suggest that reality emerges from something timeless and purely mathematical. It’s still unclear, however, just how the amplituhedron and holography relate to each other.

The bottom line, in Swingle’s words, is that “somehow, you can emerge time from timeless degrees of freedom using entanglement.”