Reciprocity in the Age of Extinction

After so much taking, it’s time to give. 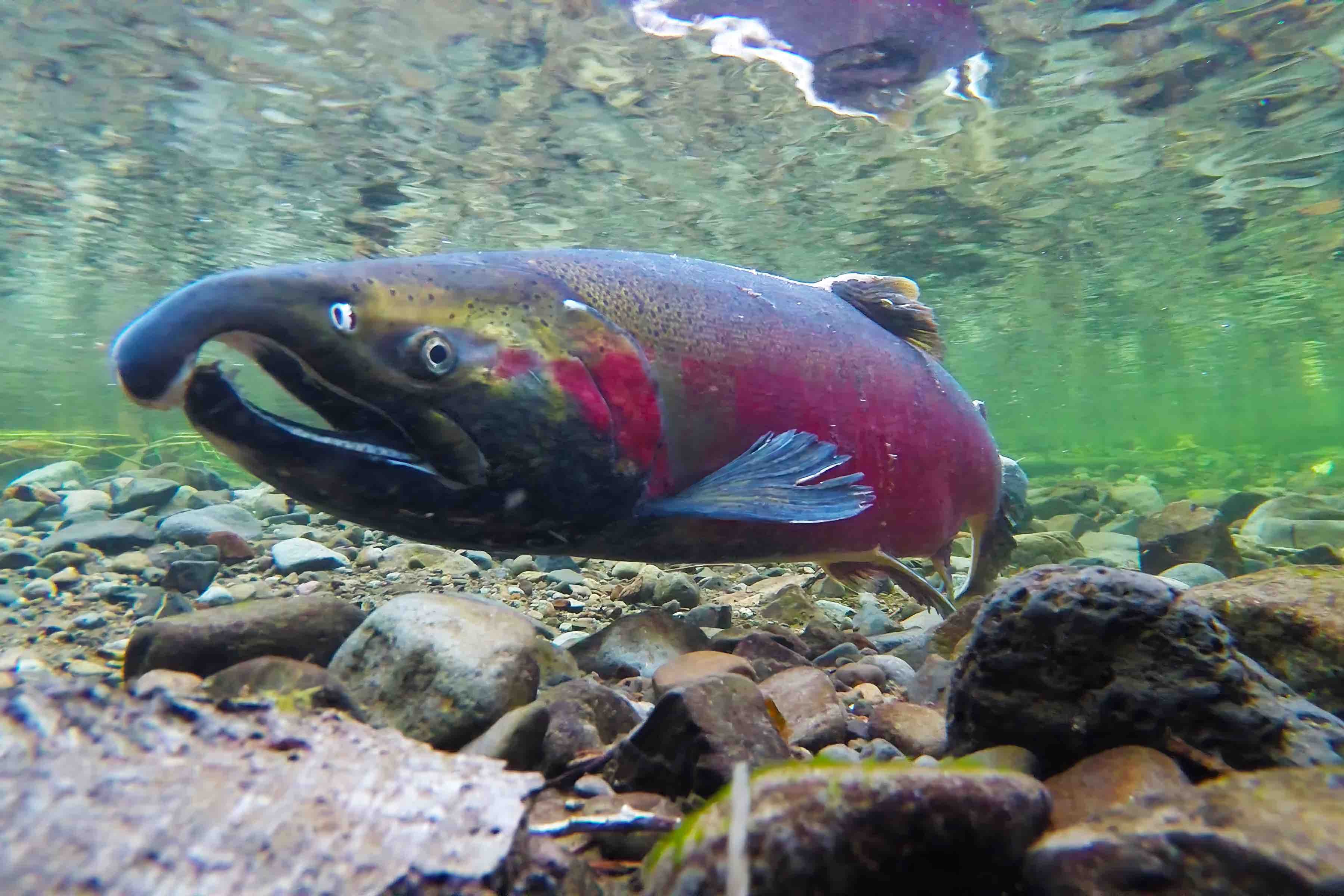 Every year my tribe, the Lummi Nation located in the Pacific Northwest corner of Washington State, hosts a First Salmon Ceremony to honor the return of the first salmon of the season, the Spring Chinook. This ceremony is conducted as an acknowledgement of the reciprocal relationship between people and salmon. We are told the story of Salmon Woman, who saved us from starvation by sacrificing her children to nourish the people. The story contains the values and practices that uphold our sacred obligation to care for and respect the salmon for their sacrifice.

We honor the first salmon according to custom. We sing songs and offer prayers. Each person in attendance is given a piece of the fish to eat. We are instructed to put the bones aside to be collected and returned to the sea. This is done so the salmon can swim back to Salmon Woman and tell her that we have honored her gift and that we are carrying the sacred relationship forward to the new generation by telling her story and following her instructions on how to care for the fish:

Never waste a salmon. Offer gratitude and never turn your nose up to their gift. Practice respect and care for the rivers and waterways they inhabit. Acknowledge the rules, such as never bathing in areas where salmon spawn or dumping waste of any kind into rivers. Only take what you need. Let nobody go hungry while the catch is being shared. Never abuse the gift, or it will not be there for the people in the future.

The story and its instructions teach us how to be in resonance with the laws of nature. By acknowledging our obligation to follow certain rules that govern a delicately balanced ecosystem, we are practicing reciprocity.

Since ancient times the practice of reciprocation has been a powerful cultural force throughout the world. It is only very recently that, as a global species, we have stopped practicing equal give-and-take relationships with the planet’s nonhuman communities and adopted a one-way relationship of extraction to serve the short-sighted interests of a select few. I believe the shift was caused by our turning away from localized nature-based beliefs to adopt homogenous, patriarchal religions, which established a hierarchy that places men at the top with all other life on the planet subjected to their whims and existing for their exclusive use and benefit.

We started calling trees, and fish, and animals “Natural Resources.” That allowed us not to think of them as having their own autonomous life source and purpose, but rather as commodities over which we are guided by divine edict—or, among secular people, by force of custom and assumed human supremacy— to exploit.

It is only very recently that, as a global species, we have stopped practicing equal give-and-take relationships with the planet’s nonhuman communities.

Think of Inter Caetera, the Papal Bull of 1493 under which the doctrine of discovery was established. Think of Manifest Destiny. Think of any legislative act or court decision upholding the rights of corporations over the rights of people and animals to have access to clean water and a healthy environment.

The village was a source of social and cultural exchange, as well as a place to harvest sustenance in accordance with a contract of reciprocity with the natural world, which would allow the community to be fed by its abundance into perpetuity. Nets were woven with willow bark and people harvested in manner that involved no bycatch or destruction to surrounding landscapes or waterways.

The Alaska Packers Association saw an opportunity to partake in this bounty, and rather than honor the laws of reciprocity, they displaced the Indigenous Fishers and usurped their village site to be used as the new location for a canning facility. Environmentally friendly Indigenous harvest practices were replaced by the installation of fish traps that caught humpback and pink salmon as well as Chinook.

In 1897 the court ruled against the Lummi, saying the treaty had not been violated. “It is not competent for this court to interfere by an injunction with the fish traps of the Alaska Packers’ Association,” decreed the court, “which are authorized and licensed by the laws of the state. Let there be a decree dismissing the suit, without costs.”

In a 1972 interview with Ronomus Lear, a Lummi Elder, he recalls an incident that he estimates to have occurred in 1913:

“When I was really young, the traps owned by white people would take in all the fish, but they dumped their humpbacks, the pinks. They just dumped thousands of them and they were dying since they had been kept in the traps for so long; they drifted to shore and died. They had the whole Legoe Bay just covered with dead fish. After they drifted away the rocks were still oily from the fish. The rocks would shine on the beach and they smelled like hell. God. Just thousands and thousands of dead fish.”

At this time Indigenous fishers were not permitted to harvest fish, and many worked in the canneries that had displaced them from the waterways and our ancient way of life. It must have been a spiritual blow to see our sacred food treated in such a way. In 1934 the fish traps were outlawed, but by then the fishery had sustained wide scale devastation and the practice of overfishing had established deep roots in our region.

Too often, the science of fisheries management favors economic gain over ecological reality, resulting in a decline in fisheries worldwide. Rather than a science guided by laws of resonance and reciprocity, we are guided by a science of exploration and conquest, motivated by discovery and extraction of resources. Even worse, the innate human drive to honor the law of reciprocity is used to manipulate us into giving up our rights to clean water and a healthy environment in exchange for whatever compromise is on offer.

The science of social psychology has identified a powerful negotiating strategy called the “Reciprocal Concessions Procedure for Inducing Compliance.” It operates on the understanding that if you are offered something and you refuse, and then you are offered something in compromise, you are more likely to meet the compromise as an offer of your reciprocation. You might be familiar with it in retail settings where it is widely used to inflate the price that we’re willing to pay for something by establishing a wildly expensive price point for the most desirable item, thereby making the middle-range item seem reasonable.

In the case of how we relate to nature, we are told that clean water and a healthy environment are much too costly. For example: “Oh, so you want a healthy fishery? Do you want to limit harvest, forgo hydroelectricity, and prohibit development to preserve habitat? No? Well, okay… How about we install a very scientifically sound fish hatchery operation and you can have hydroelectricity and catch all the fish you want?” It seems like a good deal.

And that’s the system we are in right now. That is the very scientific system by which we are trading away our ability to live on this planet without extirpating other species or driving them to extinction.

The science that governs hatcheries is the same science that was implemented over 150 years ago to serve the interests of hydroelectricity. It is based on weak evidence of efficacy and has operated as a substitute for the sound science of conservation and habitat protection. It has allowed for excessive use of hydroelectric dams and overfishing and has not made good on the promised returns. But we continue to fall for it—to accept the thing that we don’t really want in order to reciprocate the compromise offered by power companies, canneries, polluters, developers, and politicians.

The Spring Chinook, whom we Lummi honor in ceremony, face the threat of extinction. The Southern Resident orcas, icons of the Salish Sea, our relations under the waves, whose primary food source is the Chinook salmon, face the threat of extinction. It is estimated that up to one million species are threatened with extinction within decades. Globally, Indigenous cultures are faced with losing knowledge and life ways which connect them to their lands and waterways through sacred bonds of reciprocation.

Are we ready to let it all go in order to hold onto a belief in man’s place at the top of a hierarchy which requires no gift in exchange for the gifts of the natural world? Are we really ready to let it all go to avoid sacrificing anything at all in exchange for the sacrifices of Salmon Woman and her children? To avoid acknowledging the sacrifices of beings who die every day so we can live?

I say we should splurge; decline the compromise and instead make sacrifices in order to buy ourselves the nicest most beautiful and expensive item on offer: a sustainable and resonant relationship with our fellow creatures and this glorious living Earth.

An industrial fishery, and indeed industrial scale production of animals for human consumption is not sustainable. It relies on the myth that you can have something for nothing. The Law of Conservation of Energy states that “Energy cannot be created or destroyed, only transformed.”

In order to muster the willingness to enter into respectful, reciprocal relationships with nature, we must get something back for what we give, and what we get must feed our spirit as well as our bodies. In the Salmon Woman story what we get is the gift of gratitude for salvation from starvation. What new story will nourish us in this way? What new powerful story will be the catalyst of our transformation?

Lead image: A Coho salmon returning from the ocean to reproduce in his natal stream. CREDIT: Bureau of Land Management