The lush biodiversity of the Amazon may be due in part to the dynamics of branching rivers, which serve as invisible fences that continuously barricade and merge bird populations. 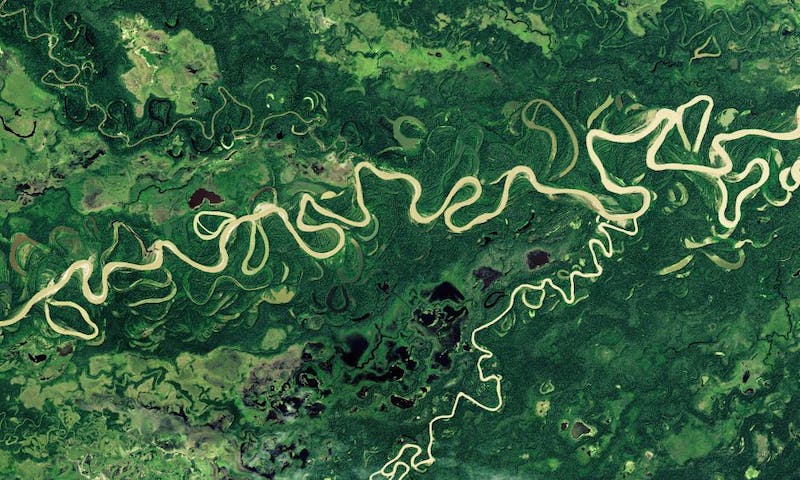 From the window of a passenger plane flying over the Amazon, the view is breathtaking. “It’s just miles across of river and river islands,” said Lukas Musher, a postdoctoral researcher at Drexel University’s Academy of Natural Sciences.

The massive rivers below branch into a dense, treelike network that has continuously rearranged itself over hundreds of thousands of years, drawing new paths and erasing old ones. The rivers divide and subdivide the forest into spaces that are each an entire world for the innumerable creatures that swing, crawl, and fly within their ever-changing boundaries.

In a 2022 study in the journal Science Advances, Musher and his co-authors report that the endless reshuffling of rivers increases the biodiversity of the beautiful birds that color the Amazon’s dense rainforests. By acting as a “species pump,” the dynamic rivers could be playing a larger role than previously realized in molding the Amazon forest into one of the most biodiverse places on the planet. Though the forest’s lowlands make up only half a percent of the planet’s land area, they harbor about 10 percent of all known species—and undoubtedly many unknown ones.

The idea that shifting rivers can shape bird speciation dates to the 1960s, but most researchers have disregarded the phenomenon as a driver of much diversification for birds or mammals. “For a long time, we really considered the rivers to be kind of static,” said John Bates, a curator at the Field Museum in Chicago, who was not involved in the study.

But recently, biologists started paying attention to the louder and louder whispers from geologists. “One of the most thought-provoking things for biologists was realizing how dynamic the geologists began to think the rivers were,” Bates said. The way that this paper weaves together biological data with geological ideas is very neat, he said.

The relationship between geographic change and biodiversity is “one of the most contentious topics in evolutionary biology,” said Musher, who did the study as part of his doctoral work. Some researchers say Earth’s history has little influence on the patterns of biodiversity, but others suggest “an extremely tight, basically linear” relationship between the two, Musher said.

To understand how river rearrangements might be molding birds in the Amazon, Musher and his collaborators from the American Museum of Natural History and Louisiana State University made an expedition to the rivers running through the heart of Brazil in June 2018.

They collected examples of birds from multiple spots on either side of two rivers: the Aripuanã River and the Roosevelt River, named after Teddy Roosevelt, who journeyed there in 1914 as part of a mapping team. They also borrowed samples previously collected near other rivers in the Amazon by other institutions.

They focused on six groups of bird species that aren’t strong flyers. (“If you want to know how the river affects birds, you have to pick the birds that the rivers are going to affect,” Musher said.) These birds, including the blue-necked jacamar (Galbula cyanicollis) and the black-spotted bare-eye (Phlegopsis nigromaculata), spend most of their time below the forest canopy of the southern Amazonian lowlands, where they follow swarms of ants and eat insects that the ants kick up.

The researchers sequenced the birds’ genes and compared them to see how they had diverged over time. They then correlated those genomic changes to data in the geological literature about changes in the rivers that the birds lived near. They confirmed those findings with a model that used the number of mutations the species picked up to infer how long ago they diverged from one another.

As expected, they found that rivers were barriers for these birds: When the rivers diverged, populations were cut off from one another. Even relatively small rivers could keep populations apart and facilitate divergence in their genomes.

But the researchers also saw that the rivers were dynamic, not static, barriers. Rivers that split would often eventually come back together, allowing sundered populations to intermingle again. Sometimes the divergent populations were too different to interbreed and remained separate species. But mostly, these reunions became opportunities for the populations to exchange new genes they had each acquired.

This “gene flow” led to new combinations of genes in the genome every time the process repeated, and it has likely been “contributing to a lot of new bird species over time,” Musher said. The patterns of diversification for the different species varied according to how the rivers changed and on what timescale.

They found that geology caused more gene flow between bird species in the west of the Amazon than in the east. In the western Amazon, where the landscape is flat, the rivers snake a lot because they’re much more likely to erode their banks and change course. In the east, where the landscape is very hilly, the rivers cut into bedrock and tend to be much more stable and less windy.

Using a mathematical model, the researchers found that contemporary rivers were more important as predictors of genomic divergence than environmental conditions and the distance between the species were. They inferred that “since divergence is due to rivers, changes to the rivers must be important for contact like gene flow to occur,” Musher said. Other factors that they didn’t account for are also likely at play, but it’s clear that “the dynamics of Earth and its biodiversity are linked, sometimes inextricably.”

Though it’s counterintuitive to think that flying birds are restricted by rivers, it’s well established that many birds can’t fly across them. Even some of the relatively small rivers in the Amazon are so big that “from the point of view of a bird, it’s like looking at a horizon,” said Philip Stouffer, a professor of conservation biology at Louisiana State who was not part of the study. “For birds that aren’t very prone to moving great distances, that’s just an impossible barrier.”

Moreover, many birds adapted to living on the dark forest floor don’t like to cross sunlit gaps, so they may not be strongly motivated to leave their home region of the forest—nor may other species that live alongside them. River rearrangements are already known to be very important for diversifying aquatic organisms like fishes in the Amazon, and the researchers think similar patterns likely hold for other species as well, such as primates and butterflies.

Birds are probably the most completely inventoried group of organisms out there, but even so, “we’re still learning about these basic patterns of biodiversity,” Musher said. So there’s still a long way to go before we understand the relationships between the Amazon’s dynamic geology and its species.

It’s likely that similar geological processes—whether they involve river rearrangements or other changes—are driving local biodiversity elsewhere on the planet as well, the authors say. But it might not look exactly like what’s happening in the Amazon, because “there’s just nothing else like it on Earth,” Musher said.

Lead image: A satellite image of the Amazon lowlands shows the immense complexity of the constantly changing network of rivers carving their way through the forest landscape. Credit: NASA Earth Observatory/Jesse Allen