Even genes essential for life can be caught in an evolutionary arms race that forces them to change or be replaced. 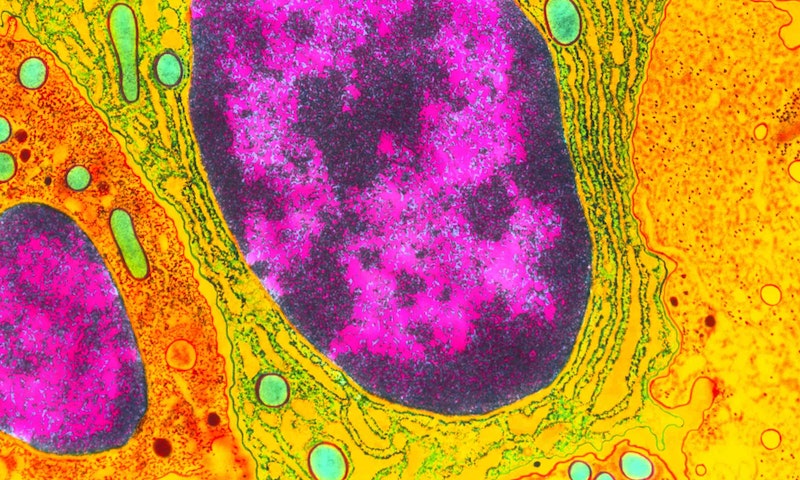 Essential genes are often thought to be frozen in evolutionary time—evolving only very slowly if at all, because changing or dying would lead to the death of the organism. Hundreds of millions of years of evolution separate insects and mammals, but experiments show that the Hox genes guiding the development of the body plans in Drosophila fruit flies and mice can be swapped without a hitch because they are so similar. This remarkable evolutionary conservation is a foundational concept in genome research.

But a 2020 study turns this rationale for genetic conservation on its head. Researchers at the Fred Hutchinson Cancer Research Center in Seattle reported in November 2020 in eLife that a large class of genes in fruit flies are both essential for survival and evolving extremely rapidly. In fact, the scientists’ analysis suggests that the genes’ ability to keep changing is the key to their essential nature. “Not only is this questioning the dogma, it is blowing the dogma out of the water,” said Harmit Malik, a Howard Hughes Medical Institute investigator who oversaw the study.

“This work is so beautiful,” said Manyuan Long, an evolutionary geneticist at the University of Chicago. “The researchers found that rapidly changing heterochromatin drives the evolution of new essential genes. Just amazing!”

Unexpected Importance of the New

In the 1970s and ’80s, the idea that genes for essential functions had highly conserved sequences and vice versa dominated the fields of evolution and developmental biology. It was thought that new genes arose rarely if at all. But by the early 2000s, a few researchers had shown that young, rapidly evolving genes are not rare in nature. Although big questions surrounded the evolution of function in these young genes, the assumption was that they were basically bells and whistles, providing only small, inessential advantages and improvements, not anything vital to survival.

That’s why Long was so surprised in 2010, when he and his students “knocked down” 200 young, novel genes in Drosophila using a technique called RNA interference. Almost 30% of those young genes turned out to be essential; the flies died without them. Even more surprisingly, though, roughly the same percentage of old genes were essential—only about 25%-35% of them. Young genes were just as likely as old ones to encode essential functions.

“I was really shocked and very excited,” Long said. “The old ideas of the field, we felt, were not right, not correct.” Because their discovery seemed so iconoclastic, Long says he decided to gather data carefully and use new technologies like CRISPR to test it further. His team updated their 2010 study in an October 2020 preprint, which addressed some methodological challenges from the earlier study and expanded their analysis to 702 new Drosophila genes. The new paper reached the same general conclusions but posed new questions: What exactly were these young genes doing, and how did they become so vital?

Comparing the Old and the New

To find out, Malik and his graduate student Bhavatharini Kasinathan focused on the ZAD-ZNF genes, the largest family of transcription factors in insects. Some of these had been flagged as new essential genes in Long’s earlier study, but their function was not well understood. About 70 of these ZAD-ZNF genes turned out to be present in all Drosophila species, but 20 were not: They were gained and lost several times over the 40 million year evolution of the various Drosophila species.

“Not only is this questioning the dogma, it is blowing the dogma out of the water,” said Harmit Malik of the Fred Hutchinson Cancer Research Center.

To the researchers’ surprise, the 20 genes specific to melanogaster were just as likely to encode essential functions as the 70 that had been strictly conserved over 40 million years. Those results independently confirmed Long’s observations across the entire Drosophila genome in a result Long calls “beautiful.”

In an odd twist, however, Malik and Kasinathan observed that among those 20 genes specific to D. melanogaster, the most rapidly evolving ones were much more likely to encode essential functions than the more slowly evolving ones.

At this point in their investigation, Malik said, “you really begin to question everything you think about in terms of biology, because you’re like, ‘Wait a minute. What is this?’”

To dig deeper into this puzzling result, Kasinathan looked for clues to the functions of Nicknack and Oddjob, two essential ZAD-ZNF genes that evolved quickly. When she checked where they were active inside the Drosophila cells, she encountered another surprise: These transcription factors did not localize to euchromatin, the part of the genome where most genes are located.

Instead, they localized to the heterochromatin—the regions of densely packed DNA that are mainly kept in a silent state because they contain most of the noncoding DNA and other so-called genomic junk. Heterochromatin has largely been ignored by molecular biologists, who like to focus on the gene-rich euchromatin where most of the action is. But even though heterochromatin is considered the boring junkyard of the genome, it does contain a few sequences essential for cell housekeeping, such as the centromeres, the ribosomal RNAs that assist with making proteins, and some regulatory RNAs that control gene expression throughout the genome. Because it evolves so rapidly, the heterochromatin compartments in different species all perform more or less the same essential functions, but their underlying DNA sequences are totally different.

“The essential function itself may not be conserved, and that’s a heretical concept,” said Harmit Malik of the Fred Hutchinson Cancer Research Center.

According to Malik, this explains why Oddjob and Nicknack evolve so rapidly: They have to adjust to the changing DNA environment of the heterochromatin to remain functional. In some ways, they are like the genes of the immune system, which change quickly to keep up with rapidly evolving pathogens in a kind of arms race. But in this case, Malik said, “It’s almost like an arms race happening in the genome, just to preserve an essential function.”

To investigate the function of these two genes further, the researchers swapped copies of Nicknack between the sister species D. melanogaster and D. simulans to see whether the two versions of the gene could functionally replace each other. Curiously, they found that the Nicknack from melanogaster could save the simulans females but not the males. That’s because the males have a huge Y chromosome full of heterochromatin, Malik explains: The Nicknack from melanogaster can restore enough function to ensure survival in simulans females, but it is overwhelmed by all the rapidly evolving heterochromatin in simulans males.

“In development, we think about genes that are really important … being super highly conserved,” Kasinathan said. “But here’s a case of a gene family that is really important for development, and you swap out even closely related transcription factors and it doesn’t work. That’s surprising and kind of cool.”

How to Be Indispensable

It’s also paradoxical: If new genes are essential, how did previous organisms live without them? Malik sees two possibilities. One is that an ancestral gene ceded its function to a new gene. The other is that the new gene performs a function that ancestral organisms didn’t need. Species today face problems that their ancestors didn’t, and those new problems require new solutions. But “what if it’s actually the evolution of these heterochromatin sequences that created the need for this essential function first?” Malik asked.

Kasinathan and Malik are now turning their attention to the other ZAD-ZNF transcription factors, many of which also localize to the heterochromatin. “This compartment of the genome that we basically ignored because it’s so gene-poor … is actually, at least for the ZAD-ZNFs, the answer to this paradox of young genes becoming essential,” Malik said.

This insight could prove important in identifying genes relevant to a variety of medical conditions and biological mysteries. “If you’re interested in centromere function, if you only look at the genes that are totally conserved across humans, yeast and flies, you could be missing really important genes that are potential therapeutic targets,” Malik said. “We’ve let our intuition and dogma kind of bias us to the point where we might be missing a lot of important biology.”

Lead image: Inside the nucleus of a cell, most of the active genes are in the portion of the DNA called euchromatin (magenta). The more condensed DNA of the heterochromatin (black) is mostly genetically inert, but researchers are learning how new genes can evolve there. Credit: Dr. Gopal Murti / Science Source