Three-dimensional supernova simulations have solved the mystery of why they explode at all. 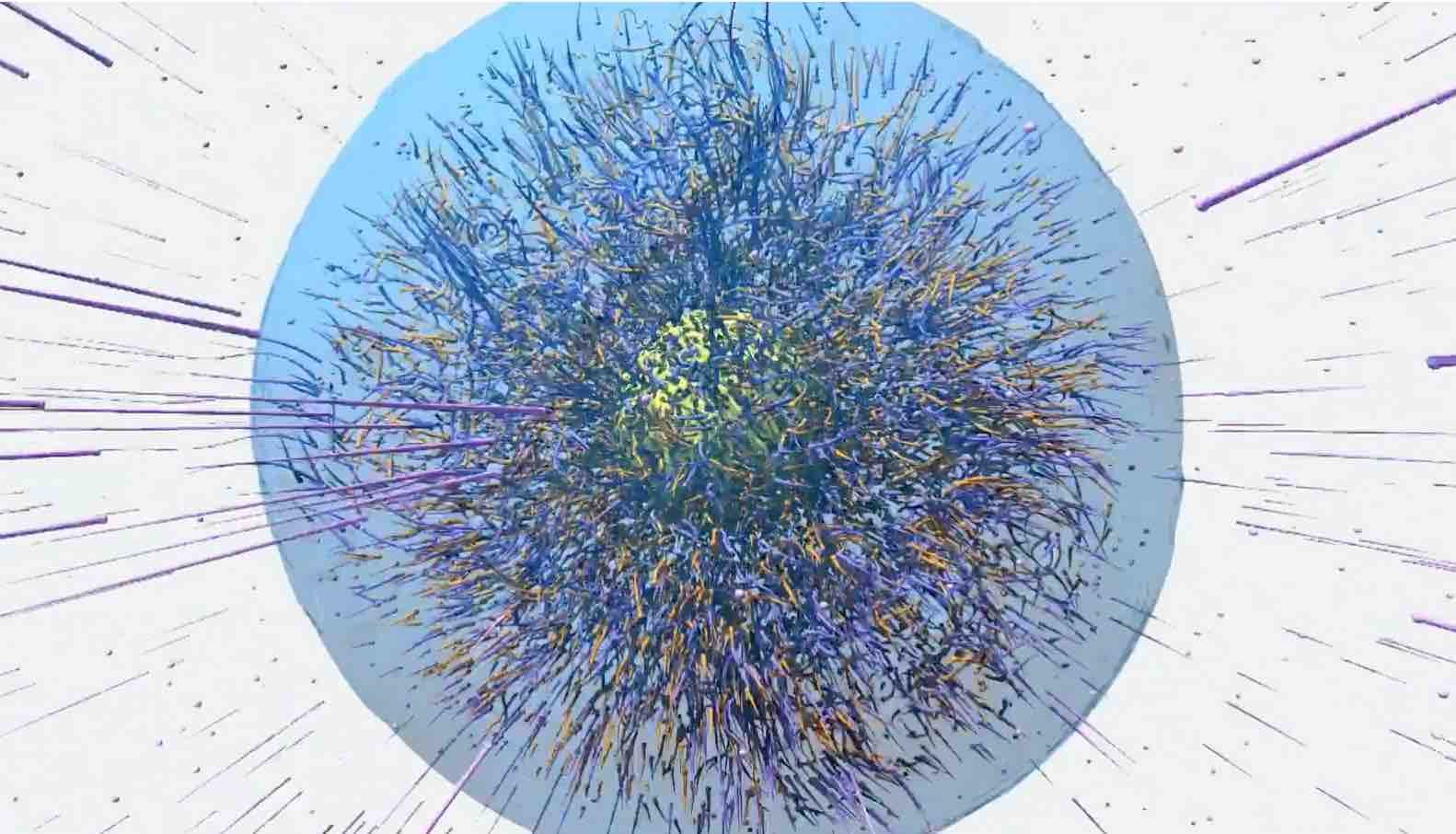 In 1987, a giant star exploded right next to our own Milky Way galaxy. It was the brightest and closest supernova since the invention of the telescope some four centuries earlier, and just about every observatory turned to take a look. Perhaps most excitingly, specialized observatories buried deep underground captured shy subatomic particles called neutrinos streaming out of the blast.

These particles were first proposed as the driving force behind supernovas in 1966, which made their detection a source of comfort to theorists who had been trying to understand the inner workings of the explosions. Yet over the decades, astrophysicists had constantly bumped into what appeared to be a fatal flaw in their neutrino-powered models.

Neutrinos are famously aloof particles, and questions remained over exactly how neutrinos transfer their energy to the star’s ordinary matter under the extreme conditions of a collapsing star. Whenever theorists tried to model these intricate particle motions and interactions in computer simulations, the supernova’s shock wave would stall and fall back on itself. The failures “entrenched the idea that our leading theory for how supernovas explode maybe doesn’t work,” said Sean Couch, a computational astrophysicist at Michigan State University.

Of course, the specifics of what goes on deep inside a supernova as it explodes have always been mysterious. It’s a cauldron of extremes, a turbulent soup of transmuting matter, where particles and forces often ignored in our everyday world become critical. Compounding the problem, the explosive interior is largely hidden from view, shrouded by clouds of hot gas. Understanding the details of supernovas “has been a central unsolved problem in astrophysics,” said Adam Burrows, an astrophysicist at Princeton University who has studied supernovas for more than 35 years.

In recent years, however, theorists have been able to home in on the surprisingly complex mechanisms that make supernovas tick. Simulations that explode have become the norm, rather than the exception, Burrows wrote in Nature in January 2021. Rival research groups’ computer codes are now agreeing on how supernova shock waves evolve, while simulations have advanced so far that even the effects of Einstein’s notoriously intricate general relativity are being included. The role of neutrinos is finally becoming understood.

“It’s a watershed moment,” said Couch. What they’re finding is that without turbulence, collapsing stars may never form supernovas at all.

For much of a star’s life, the inward pull of gravity is delicately balanced by the outward push of radiation from nuclear reactions inside the star’s core. As the star runs out of fuel, gravity takes hold. The core collapses in on itself—plummeting at 150,000 kilometers per hour—causing temperatures to surge to 100 billion degrees Celsius and fusing the core into a solid ball of neutrons.

The outer layers of the star continue to fall inward, but as they hit this incompressible neutron core, they bounce off it, creating a shock wave. In order for the shock wave to become an explosion, it must be driven outward with enough energy to escape the pull of the star’s gravity. The shock wave must also fight against the inward spiral of the star’s outermost layers, which are still falling onto the core.

Until recently, the forces powering the shock wave were only understood in the blurriest of terms. For decades, computers were only powerful enough to run simplified models of the collapsing core. Stars were treated as perfect spheres, with the shock wave emanating from the center the same way in every direction. But as the shock wave moves outward in these one-dimensional models, it slows and then falters.

Only in the last few years, with the growth of supercomputers, have theorists had enough computing power to model massive stars with the complexity needed to achieve explosions. The best models now integrate details such as the micro-level interactions between neutrinos and matter, the disordered motions of fluids, and recent advances in many different fields of physics—from nuclear physics to stellar evolution. Moreover, theorists can now run many simulations each year, allowing them to freely tweak the models and try out different starting conditions.

One turning point came in 2015, when Couch and his collaborators ran a three-dimensional computer model of the final minutes of a massive star’s collapse. Although the simulation only mapped out 160 seconds of the star’s life, it illuminated the role of an underappreciated player that helps stalled shock waves turn into fully fledged explosions.

Hidden inside the belly of the beast, particles twist and turn chaotically. “It’s like boiling water on your stove. There are massive overturns of fluid inside the star, going at thousands of kilometers per second,” said Couch.

For years, researchers had failed to realize the importance of turbulence, because it only reveals its full impact in simulations run in three dimensions. “What nature does effortlessly, it has taken us decades to achieve as we went up from one dimension to two and three dimensions,” said Burrows.

These simulations have also revealed that turbulence results in an asymmetric explosion, where the star looks a bit like an hourglass. As the explosion pushes outward in one direction, matter keeps falling onto the core in another direction, fueling the star’s explosion further.

These new simulations are giving researchers a better understanding of exactly how supernovas have shaped the universe we see today. “We can get the correct explosion energy range, and we can get the neutron star masses that we see left behind,” said Burrows. Supernovas are largely responsible for creating the universe’s budget of hefty elements such as oxygen and iron, and theorists are starting to use simulations to predict exactly how much of these heavy elements should be around. “We’re now starting to tackle problems that were unimaginable in the past,” said Tuguldur Sukhbold, a theoretical and computational astrophysicist at Ohio State University.

Despite the exponential rise in computing power, a supernova simulation is far rarer than an observation in the sky. “Twenty years ago there were around 100 supernovae being discovered every year,” said Edo Berger, an astronomer at Harvard University. “Now we’re discovering 10,000 or 20,000 every year,” a rise driven by new telescopes that quickly and repeatedly scan the night sky. By contrast, in a year theorists carry out around 30 computer simulations. A single simulation, re-creating just a few minutes of core collapse, can take many months. “You check in every day and it’s only gone a millisecond,” said Couch. “It’s like watching molasses in the wintertime.”

The broad accuracy of the new simulations has astrophysicists excited for the next nearby blast. “While we’re waiting for the next supernova [in our galaxy], we have a lot of work to do. We need to improve the theoretical modeling to understand what features we could detect,” said Irene Tamborra, a theoretical astrophysicist at the University of Copenhagen. “You cannot miss the opportunity, because it’s such a rare event.”

Most supernovas are too far away from Earth for observatories to detect their neutrinos. Supernovas in the immediate vicinity of the Milky Way—like Supernova 1987A—only occur on average about once every half-century.

While theorists have now broadly reached a consensus on the most important factors driving supernovas, challenges remain. In particular, the outcome of the explosion is “very strongly dictated” by the structure of a star’s core before it collapses, said Sukhbold. Small differences are magnified into a variety of outcomes by the chaotic collapse, and so the evolution of a star before it collapses must also be accurately modeled.

Other questions include the role of intense magnetic fields in a rotating star’s core. “It’s very possible that you can have a hybrid mechanism of magnetic fields and neutrinos,” said Burrows. The way neutrinos change from one type—or “flavor”—into another and how this affects the explosion is also unclear.

“There are a lot of ingredients that still need to be added to our simulations,” said Tamborra. “If a supernova were to explode tomorrow and it matches our theoretical predictions, then it means that all the ingredients that we are currently missing can safely be neglected. But if this is not the case, then we need to understand why.”

Lead image and first simulation: Turbulent matter swirls around the center of a collapsing star. The supernova’s shockwave, shown in blue, gets an extra push from the turbulence, while the dense core at the center will go on to form a neutron star. Credit: D. Vartanyan, A. Burrows. Thanks to ALCF, D. Radice and H. Nakagura

Second simulation: Swirling matter surrounds the core of a supernova in the first half second after core collapse. In this simulation, the matter is colored by entropy, a measure of disorder. (Hotter colors like red indicate higher entropies.) Because of the turbulence, the explosion isn’t symmetric. Credit: D. Vartanyan, A. Burrows. Thanks to ALCF, D. Radice and H. Nakagura