Should We Really Be Messing with Asteroid Orbits?

With one small error or manipulation, cosmic interference would spell disaster. 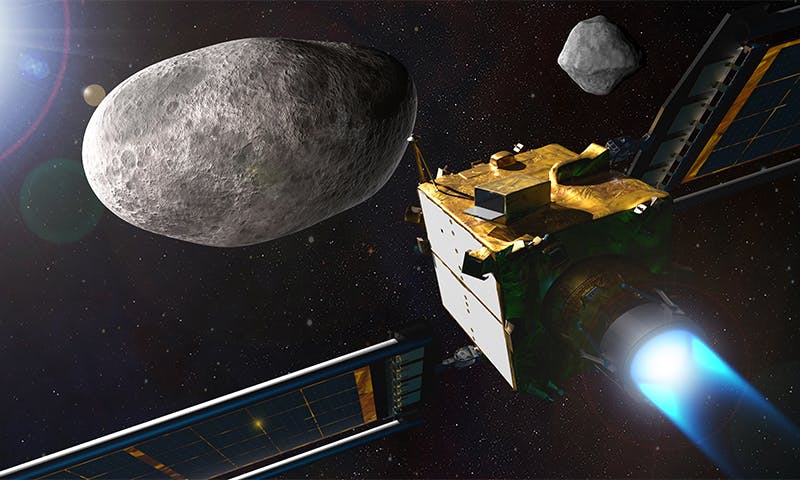 Things go bump in the cosmic night all the time. Rocky objects collide in planetary systems across our galaxy, providing astute astronomers with telltale signatures of warmly glowing dust from these grinding impacts. Stellar remnants like neutron stars can crash together unleashing bursts of searing gamma-rays, and even black holes can collide and coalesce in events marked by the gargantuan ringing of spacetime as energy ripples outward in gravitational waves.

On Sept. 26, 2022, another particularly novel kind of cosmic collision called out for attention in the quiet of space. A complicated package of machinery and electronics smashed at high speed into an ancient 200-meter-sized rubble-pile asteroid, known by some of the beings on the planet Earth as Dimorphos. Weighing in at around 600 kilos, this package was the Double Asteroid Redirection Test (DART) spacecraft, an international mission led by NASA to attempt the first deliberate alteration of the orbit of a celestial body. Specifically, the moon-like orbit of Dimorphos around a larger asteroid known as Didymos, all while this tumbling pair tracks around the sun.

The technology to prevent asteroids from hitting Earth could also be used to cause asteroids to hit Earth.

The motivation for this mission was to examine our options for diverting, or deflecting, asteroids that might pose an impact hazard to the Earth. To do this the DART spacecraft, launched in late 2021, threaded itself along a carefully chosen trajectory so that it would hit Dimorphos “head on” as it orbited around Didymos. Rather than risk changing the overall orbit of the asteroid pair around the sun, this would simply alter their binary configuration, and allow changes in Dimorphos’ motion to be precisely gauged.

The collision was spectacular, sending up stringy-looking plumes of rubble and dust that could be seen by astronomers back on Earth. The impact also seems to have done the trick, shortening Dimorphos’ orbit around Didymos by a substantial 32 minutes out of its previous 12-hour period.

We have crashed spacecraft into objects before, including deliberate efforts, like NASA’s Deep Impact mission in 2005, to smash into the nucleus of comet Tempel-1 to excavate material using a 360-kilogram impactor. We’ve also crunched into different asteroids in search of samples, or dropped onto the moon and other planetary surfaces. But none of these previous events involved either enough energy to cause significant change in a celestial object’s motion, or quite such targeted precision. The Deep Impact event, for instance, is thought to have modified the comet’s orbital velocity by no more than 0.0001 millimeters per second, and its entire orbital period around the sun by far less than 1 second.

In that sense, the DART mission has been an unqualified success; we now have a proof-of-principle that we can deliberately modify the trajectory of objects orbiting the sun, especially the kinds of objects that pose the greatest threats to our species’ civilization if they were to hit us. Plans are now afoot at the European Space Agency to send a followup mission called Hera to carry out detailed reconnaissance of the Dimorphos-Didymos system in 2026 and to check out more of the DART aftermath.

But the story does not end here. Carl Sagan, writing in 19921 and later in 1994,2 may have been the first scientist to point out what has become known as the “deflection dilemma,” in which the technology developed to prevent asteroids from hitting the Earth could also be used to cause asteroids to hit the Earth.3 In fact, with enough skill, asteroids could target very specific locations—from heavily populated cities to the agriculturally critical regions of enemy nations. He reasoned that since the odds of having to deploy the technology to divert a naturally hazardous asteroid in any 50-year period is around 1 in 10,000, the probability of misuse is almost certainly larger. This rather grim assessment was clearly colored by Sagan’s deep concerns about the prospects of nuclear war, where the idea of annihilation brought about by technology looms large.

More recently others have suggested that the real dilemma lies in the technical challenges of asteroid deflection itself, where small errors, or unanticipated outcomes, could result in redirection away from the original points of impact to new ones that had previously been considered safe.4 In other words, it could be all too easy to make an Earth-crossing asteroid much more hazardous, even triggering conflict when nations realize that someone’s mistake has put them in the firing line.

The rise of commercial space exploitation further amplifies these problems. A space economy based around the utilization of natural resources in objects like asteroids generates opportunities for dangerous errors or unanticipated outcomes. Getting your hands on asteroid mineral wealth can involve modifying the orbits of suitable bodies to reduce the cost of their exploitation. The odds of causing a collision event with the Earth might still be very, very low, but the whole point of a successful space economy is its sheer scale, enabling exponential growth for centuries or even thousands of years. At some point something will likely go wrong, and even if it doesn’t, the rapid growth of this technology would lower the barrier to deliberate misuse.

Of course, the lower that barrier the easier it becomes to redirect a redirected asteroid, to protect the Earth’s surfaces or other assets. The catch is that you have to know that protective action is needed, since it’s one thing to build a database of potentially hazardous cosmic objects—as we have been doing for decades now—and it’s quite another thing to monitor all of these objects for unexpected changes to their orbits. Our present systems for surveying so-called Near-Earth Objects focus on discovering new hazardous bodies, not on going back and checking in on the roughly 30,000 ones already cataloged.

Whether or not any of these concerns materialize, the DART mission should not be underestimated as a pivotal moment in the history of life around our sun. It represents the first significant, targeted engineering of the fundamental structure of our solar system in 4 billion years.

On a more parochial level, it’s true that life has already made modifications of Earth’s planetary structure: altering its atmospheric, oceanic, and surface chemistry as well as implementing countless physical changes to the erosion of continents and the meandering of rivers, and even influencing the formation of clouds and patterns of precipitation. Some of these changes have conceivably influenced the evolution of planetary rotation, through the complex interplay of tides in water and air that are responsible for Earth’s gradually increasing daylength. But these engineering feats have, until now, been very much restricted to one location. Protecting Earth’s biosphere from future asteroid collisions means reconfiguring other parts of our solar system.

Why not bring Mars in from its cold orbit, or push Venus to a more temperate distance from the sun?

A technological species that reworks the cosmos around it is not a new concept for science fiction, or for science, thanks to Freeman Dyson’s famous 1960 study of how to capture all of a star’s energy output using vast artificial structures.5 That analysis rests on precisely the same hypothesis of exponential growth that motivates today’s commercial interests in utilizing space resources. In this picture, once you’ve mastered the movement of asteroids, and scaled up the capture of solar energy, your capacity to move matter around will scale up, too, and planets are very clearly next on the menu.

Why not bring Mars in from its cold orbit, or push Venus to a more temperate distance from the sun? Or detach icy moons like Europa and Ganymede from their places around Jupiter and bring those nearer to the sun, allowing them to thaw into bona-fide open ocean worlds? Ice ages have always been a bit of a headache for the Earth, so it could also make sense to gently drift Jupiter and Saturn farther away to modify their influence on Earth’s orbital cycles. In doing so Uranus and Neptune might also be reconfigured in their orbits to play a more useful role as staging posts to the Kuiper Belt and beyond.

In 2017, the planetary scientist Sean Raymond even presented options in Nautilus for how a planetary system could be built up to its maximum capacity for stably orbiting worlds with his playful “ultimate engineered solar system,” riffing off some earlier work on orbital stability.6 Among the choices are configurations where an astonishing 252 Earth-mass planets could be placed in a set of six tightly packed, but stable, orbits (with multiple planets spaced around each of these orbits) all within the habitable zone of the sun, where temperate surface environments could exist on these worlds.

If you’re willing to have some orbiting with retrograde motion, you can boost even this number. Finding the necessary mass of iron and rock to make 252 Earths might be tricky in our solar system, though; we probably only have enough material for about 20 to 30 Earth-sized objects available if we repurposed the giant planet cores. However, before reaching such an extreme, it is quite possible to fit six Earth-massed worlds each on their own orbit within the habitable zone of the present-day sun, which is a much more tenable proposition. (If one can suspend disbelief a little to consider any of this tenable.)

Naturally, if we ever get remotely close to this level of system engineering there will be new dilemmas. This kind of technology wouldn’t just pose the type of hazards that Carl Sagan envisioned with asteroid deflection, it would pose hazards where entire planets might be purposefully or mistakenly sent onto sun-diving orbits, or along ejection trajectories where only the cold darkness of interstellar space awaits. Such manipulations might also create entirely unforeseeable, emergent problems in the subtle chaos of orbital dynamics. Or through the interplay between the evolving efficiencies of a space-faring civilization’s infrastructure with the complexities of an artificial celestial architecture that had not truly co-evolved with life. In the latter case it might be akin to industrial pollution or global warming, messing up the very conditions that are essential for our existence.

Those problems clearly sound rather far-fetched, but there is reason enough to imagine that the DART mission’s success was a moment that future historians will see as pivotal. It was one small collision for an asteroid, one giant caution for humankind.

Caleb Scharf is the director of astrobiology at Columbia University. His latest book is The Ascent of Information: Books, Bits, Genes, Machines, and Life’s Unending Algorithm.