Snorkeling in Their Own Plastic

Dave Ford chartered a cruise for Fortune 500 company leaders and activists to dive into an environmental crisis. 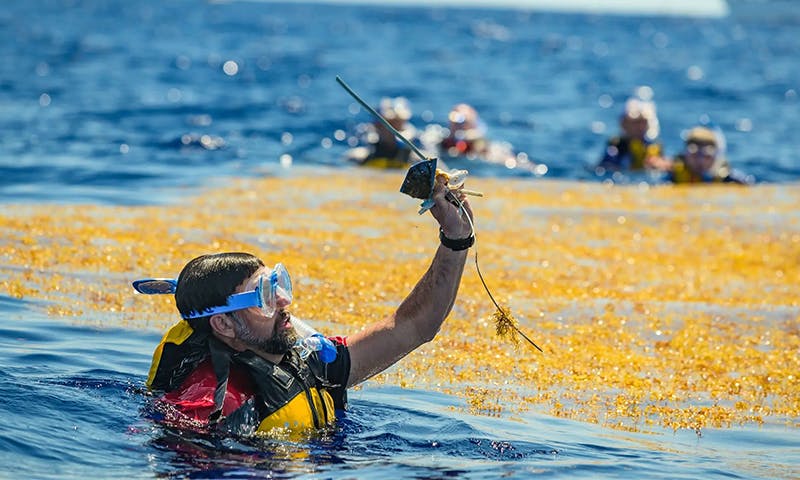 Dave Ford was 28 years old and killing it in ad-tech sales but found the work unfulfilling. So, like legions of young people before him, Ford quit his job to see the world. Unlike most starry-eyed travelers, his adventures led him to the Ghazipur landfill outside Delhi, India—a smoldering garbage heap 70 acres in size and almost as tall as the Taj Mahal, dotted with people picking plastic to sell to local recyclers.

For Ford, bearing witness to this dystopic wasteland—a direct result of our single-use-plastic global economy—sparked an idea: If he couldn’t bring this mountain of garbage to Mohammad, he could certainly bring Mohammad to the mountain.

One of the biggest packaged-goods companies found one of their toothbrushes.

All this trash, most of it plastic, is not just unsightly, it’s a crisis, Ford says. “The Western world ships their waste to the Global South, so beaches there have knee-high garbage. Two billion people don’t have trash collection, so they’re burning it in their backyard or illegally dumping it next to rivers and monsoon areas.” Plastics get washed out to sea and are eaten by ocean animals or degrade into microparticles that enter our food systems, to the extent that the average human contains a credit card’s worth of plastic in their bodies, with unknown long-term health impacts.

To tackle this crisis, Ford took a gamble: He chartered a ship and invited leaders from Fortune 500 companies (Coca-Cola, Kimberly-Clark, Nestlé) and activist NGOs (Greenpeace, Ocean Conservancy, World Wildlife Fund) to bunk together and snorkel among the waste of the North Atlantic Gyre. And Ocean Plastic Leadership Network was born. “I don’t know if I can say we’ve cracked a code,” Ford says, “but we certainly think meaningful connection can spur all kinds of progress.”

Nautilus spoke with Ford about his worldwide travels, how he got involved with convening a global plastics treaty, and what it was like having “enemies” like Nestlé and Greenpeace bunk together.

Tell me how the Ocean Plastic Leadership Network came together.

A little backstory: I was a top ad-sales guy in New York City and doing really well on paper, but just not feeling fulfilled. So I went into business with this guy I had met in Antarctica, during two years of travel in my late 20s. He had been looking for a partner for a wildlife travel business. I tried it and very quickly realized it wasn’t what I wanted to be doing.

I had all this business experience, so we started taking these corporate groups all around the world and immersing them in issues related to climate change. We’d just finished a trip in India, and I had an extra day in Delhi. I visited the Ghazipur landfill, which is this giant landfill mountain outside of Delhi. Half of it was on fire and smoldering, while the other half was covered with hundreds of people picking recycled plastic out of it. Seeing it in person, there was something about the tangibility of the plastics crisis that just blew me away. I talked to my partner at the time, and we decided to book a ship that was transiting from the Antarctic to the Arctic and to launch what we ended up calling the Ocean Plastic Leadership Summit.

What did you know about plastics?

Nothing. I had no experience in plastics. But I ran around for a year recruiting the biggest plastics companies in the world, as well as leaders from environmental NGOs. We ended up taking 165 people into the middle of the Atlantic garbage patch. There are these five spinning gyres of garbage in the oceans, and one of them is in the Atlantic, right in the Bermuda triangle. That’s where we went.

On that ship we had Nestlé and Greenpeace share a room—organizations that were in the middle of a big action against each other. Coca-Cola was there, and the American Chemistry Council. All these activist groups were there, stuck on a boat together for four days, snorkeling in the open ocean. One of the biggest packaged-goods companies in the world found one of their toothbrushes floating around 500 miles off the coast of Bermuda.

Without a doubt, they’re the last line of defense between plastic and our oceans.

As a result of that trip, the Ocean Plastic Leadership Network, or OPLN, was born. The companies that were with us became its foundation. Fast forward three years, we have 150 different organizations that are a part of the network—Coke and Pepsi, Nestlé and Unilever, Colgate and Kimberly-Clark, Hasbro, Dow Chemical, IKEA, all these major corporations. And it all started on this experiential journey.

That’s brilliant. And nobody killed each other on the ship, right? Was there any violence?

There was no violence. I mean, there were some hard conversations and some tense moments. Tension can be good, I think. We have this “tension equals progress” mantra we really believe in. A lot of times, what we’ve been able to do is help these organizations understand what they agree on and what they don’t agree on, which is always changing as things shift so fast on environmental issues.

One of the most powerful things we did was make sure there were representatives from the informal waste sector from countries in the Global South on the ship. We had an organization from Haiti, two from India, one from Brazil. About 20 million people in the world are from the informal waste sector and 50 percent of all recycled plastics comes from these people. And they’re marginalized. They’re on the fringes of society. But without a doubt, they’re the last line of defense between plastic and our oceans. Generally, what we’ve been able to do is build this bridge between countries in the Global North and the Global South. Especially with this kind of issue, you need all hands on deck.

Are the companies seriously engaged in it, or do you ever fear that it’s just greenwashing on the part of giant conglomerates?

We did everything to prevent this being some sort of industry kumbaya session. Part of the way we ensure against greenwashing is by inviting the activist NGOs that are campaigning directly against the companies. Getting Greenpeace and Coca-Cola in the same room gives the process validity, because you’re bringing all these opposing viewpoints together. Part of the formula is just making sure the organizations that actively oppose a lot of these brands are looking them right in the eye every day.

That being said, it’s such a complex, chaotic mess, and it’s nowhere close to being solved. It’s an absolute crisis, and there’s all these different opposing viewpoints. There are a million different stakeholders and none of them agree on anything, or even something like, Should we shut the plastic off at the tap, or should we have more recycling infrastructure? The only way to solve this is through a global treaty.

You are working on that treaty, yes? Is the UN involved with it?

We are. And yes, it’s a UN thing. I recently wrote a position piece about it for Scientific American. Because we built this forum for organizations that historically don’t get along to try and have productive dialogue, we were asked by the World Wildlife Fund to start to convene around the global plastics treaty, which is getting negotiated now—it’s the Paris Agreement for plastics. We’re running activist, industry, and government forums in seven countries right now, including the U.S., Malaysia, Indonesia, Ghana, South Africa, Chile, and Pakistan. 165 organizations are involved with it, from all around the world.

It’s just been totally wild, and it all came out of this huge bet we took to take all these executives out into the middle of the Atlantic Ocean. If you would’ve told me, back when we started this company in 2015, that seven years later we would be a convener around global treaties, I don’t know if I would’ve believed you. We just took this idea and ran with it.

You’ve got a very interesting model. Dialogue has always been an important part of diplomacy, but it’s interesting the way you’ve put it all together. It sounds like education is a big part of the process, too. Do you try to guide this in any way while on the ship?

There are three pillars that we talk about. One is experiential education—it’s getting these leaders to go where the problem is so they can see and experience it themselves. It’s also about putting these groups together that don’t usually see eye to eye. If these different groups understand each other better, it’s hugely advantageous when trying to solve these big crises. Then the last pillar is basic environmental fluency, like, What are the facts around ocean plastics? How can we agree on the same starting point?

The only way to solve the plastic crisis is through a global treaty.

The power of travel, the power of experiencing something directly—these memories that last forever. When you go on trips, you forge relationships with other folks on the trip. Ideas are incubated. Multimillion-dollar programs have been funded by people who came and had that “spark” on the ship.

None of this was by design. It was just because we built a safe space for meaningful dialogue and education. We haven’t had years of baggage, like a lot of these other organizations that take advocacy positions. We really believe that everybody should go see this stuff first and foremost and learn from other organizations. And then we fell into this global treaty convening role and really helped to accelerate that process, which has been wild.

I was recently speaking with people at the Bertarelli Foundation, and they were saying that around half of the plastic that reaches the Galapagos Islands is from China—10,000 miles away.

It’s crazy. In the Atlantic garbage patch, you get lobster traps from Maine, and octopus traps from Morocco. It all converges in the center of this gyre.

Looking at photos of the North Atlantic Gyre, there’s a lot of yellow floating around. What’s that?

That’s sargassum seaweed—seaweed that catches all the plastic. These gyres are not giant plastic islands. There are high concentrations of plastic, but it’s mostly tiny fragments and microplastics everywhere. There is big stuff floating around out there, but that’s mostly on beaches, like in Bermuda, where six-foot-high piles of trash just go on and on and on.

Are you entirely focused on plastics, or are you taking this concept to other arenas?

We do feel like we’ve cracked this code. It’s part experiential—Go and see the issue firsthand—and part positional—Let’s learn from these opposing forces. You can then ask, What are the facts? What can everybody agree on? How do you get a forklift driver for a big company to understand why the company cares about climate change? How do you make sure your finance people understand why it’s important?

We’re going to do the same thing at the intersection of climate and blockchain in Greenland on August 15th. The network is unnamed as of right now but has strong blockchain roots to accompany NGOs and activists concerned with the carbon footprint of cryptocurrencies.