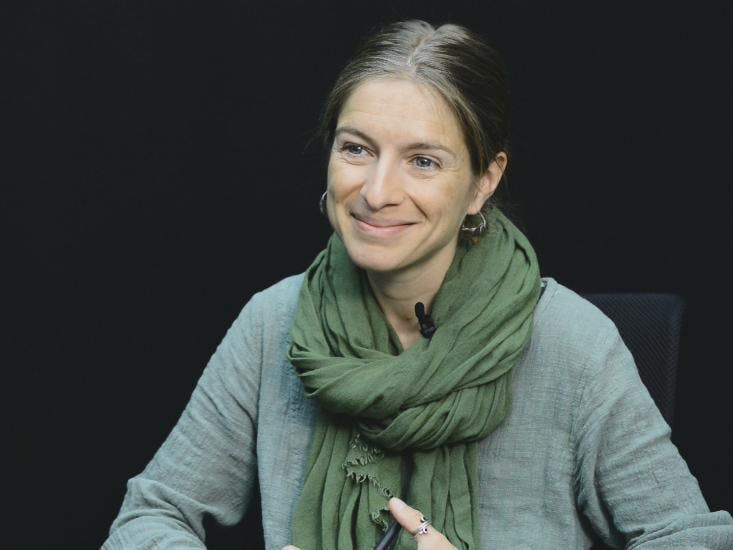 To explain her motivations as a writer, Anna Badkhen quotes the Polish poet Zbigniew Herbert: “you have little time you must give testimony.” Badkhen stopped by the Nautilus office to sit for an interview and take us behind the scenes of “The Men Who Planted Trees,” her cover story for the Spring 2014 Nautilus Quarterly. The title refers to a village of fishermen in Mali who are reforesting a stretch of the Bani River to stem the mudslides that threaten their livelihoods. “They became volunteer conservationists, planting back the bush,” she writes.

Badkhen met the villagers while walking across West Africa with nomadic Fulani cattle-herders while doing research for a forthcoming book. Born and raised in the Soviet Union, Badkhen, 43, is something of a nomad herself, a journalist who has traversed some of the most extreme environments on the globe. After reporting from the war zones in Afghanistan and Iraq, she embedded among New Orleans neighbors in the wake of Hurricane Katrina, telling the same kind of quietly powerful tales of ordinary people riven by extraordinary circumstances that she had in Iraq.

For her 2013 book, The World Is a Carpet, Badkhen lived for a year with a family of carpet weavers in a dusty village in Afghanistan, detailing a way of life in which time seemed to have vanished. Living among the weavers, and in 2014 among the Fulani cowboys, constitutes the kind of work that now excites the former war correspondent—although she can’t quite put a label on it. “I see myself as a storyteller. I see myself as a connector of the world,” she says. “I insert myself into the lives of people for very long stretches of time. I guess you could call it ‘slow journalism.’ ”

This article originally appeared in Nautilus Magazine‘s blog, Facts So Romantic in May, 2014.