Some Physicists See Signs of Cosmic Strings From the Big Bang

Subtle aberrations in the clockwork blinking of stars could become “the result of the century.” That’s if the distortions are produced by a network of giant filaments left over from the birth of the universe. 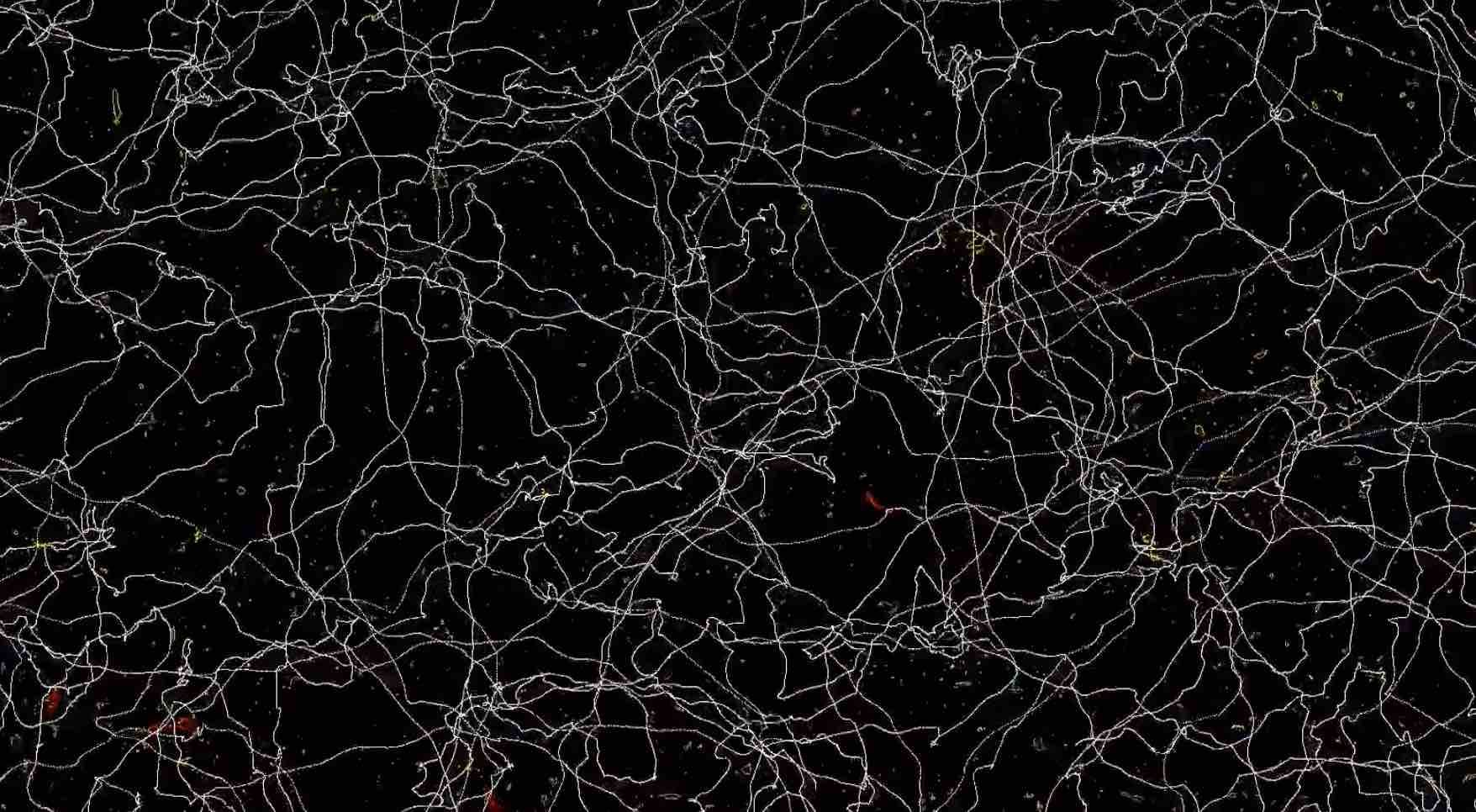 Cosmologists think that at the beginning of the universe, all the forces of nature were, for a brief fraction of a second, unified. But as the universe expanded and cooled, this superforce condensed into its familiar parts: gravity, electromagnetism and the strong and weak forces.

According to some calculations, the cosmos might have cooled so quickly that the fabric of space-time became fractured, creating a network of whisper-thin tubes filled by pure energy that stretch across the breadth of the observable universe.

This is one possible origin story of cosmic strings.

Predicted in the 1970s, cosmic strings have long been beyond the reach of experiment. Now, though, some physicists think they have glimpsed the first evidence that these giant one-dimensional structures exist.

“My gut feeling is that these first signs look very promising,” said Kai Schmitz, a theoretical physicist at CERN, the laboratory in Europe. But he noted that there’s a long way to go before anyone can claim a discovery.

“If we discover cosmic strings, it’ll be the result of the century,” said Eugene Lim, who researches the cosmology of the early universe at King’s College London. “But to quote Carl Sagan, ‘extraordinary claims require extraordinary evidence,’ and right now the evidence is a bit thin.”

“The data seems to prefer the cosmic string interpretation, but not by a great amount,” said John Ellis.

The new data that might suggest the presence of cosmic strings comes from NANOGrav, a group of astronomers who keep a watchful eye on dozens of spinning dead stars called pulsars.

Pulsars beam out radio waves from their poles, so that from Earth we see regular flashes each time the beams sweep by our line of sight, like the flashes of a lighthouse. In fact, pulsar blips seem so unnaturally regular that on their discovery in 1967 the first pulsar was named LGM-1 for “little green men.”

Pulsars are the most precise cosmic timekeepers. So when their blips are distorted, physicists know something is up. In particular, the researchers look for distortions caused by gravitational waves—ripples in space-time that, when they pass through the pulsars, change the blips’ arrival time on Earth. These gravitational waves could come from the thrumming of cosmic strings, collisions of supermassive black holes, or other violent cosmic processes.

NANOGrav’s analysis, posted online on Sept. 9, 2020 pulls together more than 12 years of observations of dozens of pulsars from radio telescopes dotted across North America. The paper is still being peer-reviewed, but the researchers found that something was distorting the blips emitted by all of the pulsars in the same way, and with frequencies that are expected of gravitational waves. It remains possible that this pattern is instead coming from some unknown, common source of noise in the pulsars, or in the clocks that measure the blips’ arrival on Earth.

Theorists have already started speculating about cosmic explanations of NANOGrav’s tentative signal, even though the signal lacks a smoking-gun feature that would prove that it is gravitational waves: a type of correlation in the timing of pulsars that occurs because of the alternating way in which gravitational waves stretch and squash space-time. More pulsar timing data will be needed before the scientists can tell if their signal has this crucial hallmark.

“We cannot say for sure if it is noise or it’s a gravitational wave signal,” said Alberto Sesana, former chair of the International Pulsar Timing Array, a consortium of projects including NANOGrav.

NANOGrav’s paper provoked a particularly swift reaction among physicists who work on cosmic strings. “This is what’s called ambulance chasing … everybody tries to get the first paper out,” said Schmitz, who was hiking in the Italian mountains when he heard the news and who spent the weekend excitedly exchanging WhatsApp messages with his colleague Simone Blasi.

Within days, they posted a paper coauthored with Vedran Brdar arguing that the data could be interpreted as coming from cosmic strings, if the strings were created when the universe had a certain ultra-high temperature. This temperature “will always ring a bell” among physicists, Schmitz said, because it’s the point at which the strong, weak and electromagnetic forces are believed to have been unified.

After the Big Bang, the unified superforce would have separated out into the forces of nature we see today by going through a series of phase transitions, akin to liquid water freezing into ice. This haphazard process could have created cosmic strings as cracks in space-time, like the cracks that you can see inside ice cubes.

The universe would have kept expanding, cosmic strings growing along with it. But every so often, strings would fold in on themselves or collide with other strings, causing loops to pinch off in bursts of energy. These string loops would keep wobbling over billions of years, gradually losing energy as they emitted gravitational waves. “It’s very similar to when you excite the string of a violin,” Schmitz said.

Collectively, the vibrating loops would create the kind of gravitational-wave signal that NANOGrav might have seen. (This signal is not expected to be visible to LIGO, the gravitational-wave observatory that detects black hole and neutron star collisions.) If true, it would be the first window physicists have opened onto those primordial phase transitions.

Another more speculative possibility is that cosmic strings could come from the tiny vibrating strings of string theory. Some string theory models propose that strings could have grown to colossal proportions during the initial rapid expansion of the cosmos. Differences in the tension of these kinds of cosmic strings and in how string loops break away would create a unique gravitational-wave signature distinguishing them from other kinds.

John Ellis, a particle physicist at King’s College, doubts that the new data is evidence of string theory. “If you pardon the expression, I think that would be a very big stretch.”

Alternatively, NANOGrav’s possible gravitational-wave signal could come from supermassive black holes, which, unlike cosmic strings, are known to exist.

Almost every large galaxy, including the Milky Way, has a supermassive black hole in its center that weighs million or billions of times more than the sun. If two galaxies merge, their black holes will start to rotate around each other, creating gravitational waves as they spiral.

Supermassive black hole mergers have never been seen. “It’s embarrassing that we have no idea whether they merge. It’s such a gaping hole in our knowledge,” said Jenny Greene, an astronomer at Princeton University. “Is it a billion years, or does it take closer to the age of the universe for them to come together?”

In a paper posted online on Sept. 16, 2020, Ellis and a collaborator found that the shape of the NANOGrav signal looks more like what you would expect from cosmic strings than supermassive black holes. “The data seems to prefer the cosmic string interpretation, but not by a great amount,” Ellis said.

Other researchers have explored the possibility that NANOGrav might be seeing primordial black holes or radiation from dark matter. But everyone is treading carefully.

“Personally, the right thing for me to do is sit down and wait for more data. But, you know, we’re all impatient,”  Lim said.

Alongside NANOGrav, the European Pulsar Timing Array and the Parkes Pulsar Timing Array in Australia will, in due course, release their own data. China’s new 500-meter FAST telescope and South Africa’s MeerKAT telescope array are also joining forces in the international effort to look for gravitational waves with pulsars, Sesana said. “We’re all working together to collect and analyze the data in order to build the confidence of what’s there.”