Some Proteins Change Their Folds to Perform Different Jobs

Unusual proteins that can quickly fold into different shapes provide cells with a novel regulatory mechanism. 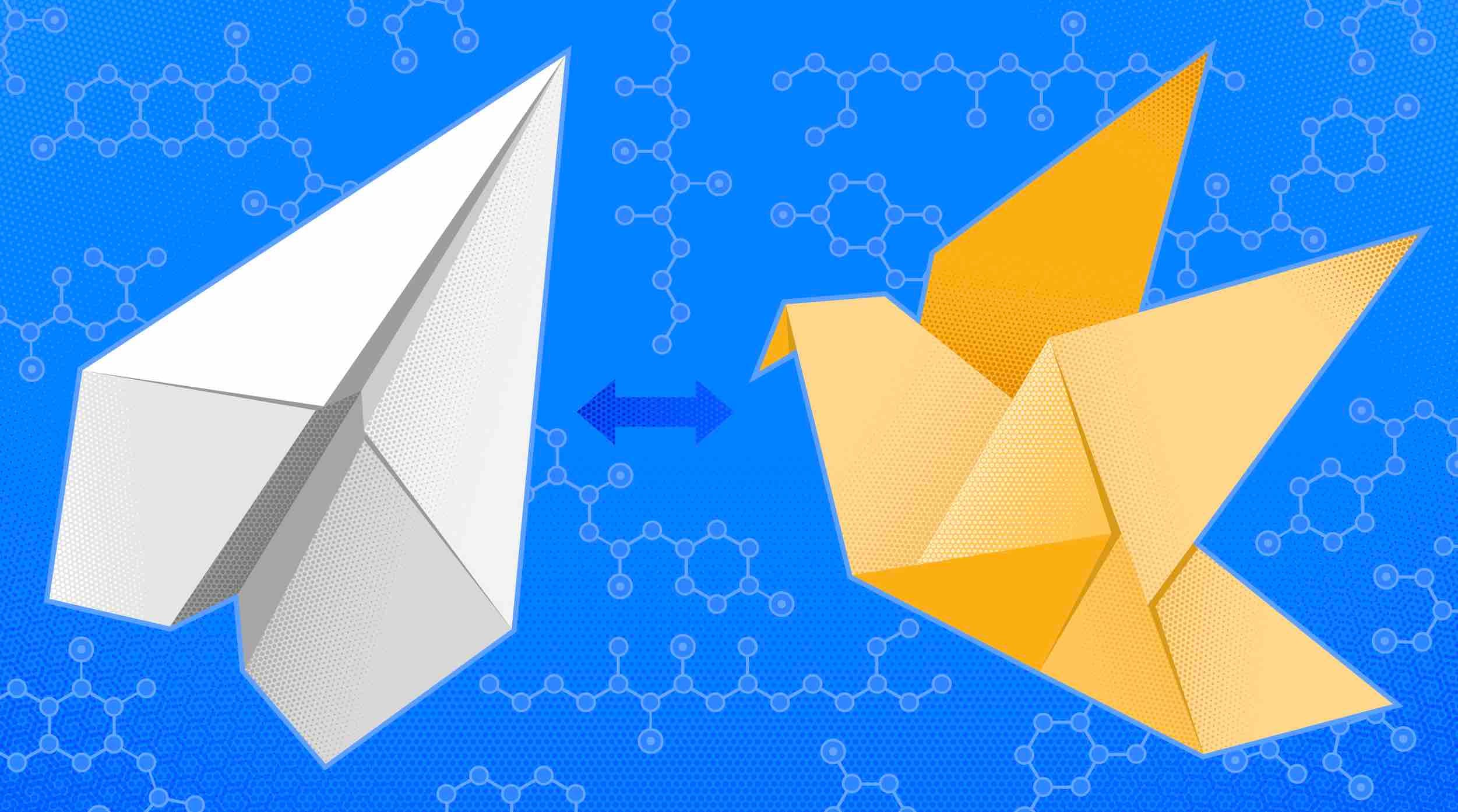 Proteins are molecular origami at its finest. Classically, a protein is imagined as a chain of amino acids that folds into a single stable configuration, one that evolution has selected over the ages for a particular function. But in the last few years, biophysicists have learned how numerous and extraordinary the exceptions to that rule are—including some two-faced proteins that can refold as needed in an instant.

First came the discovery of a special class of fold-switching proteins that have more than one stable conformation and can perform two different functions. Such proteins might seem unlikely to evolve because natural selection for the first shape and function could easily be detrimental to the second, and vice versa. Yet fold-switching proteins, of which about 100 are currently known, have evolved in all kingdoms of life and perform more than 30 types of biological functions.

“We’re used to thinking about proteins having one structure, and so once the structure is solved, we think that we’re done—that’s it, problem solved,” said Lauren Porter, an investigator at the National Institutes of Health who studies fold-switching proteins. However, as technologies such as cryo-electron microscopy and solid-state nuclear magnetic resonance have become available, “alternative conformations of proteins are turning up more,” she said.

With the help of these technologies, researchers have found a few examples of proteins that go beyond a mere capacity for fold-switching. These metamorphic proteins change quickly and reversibly from one folded shape to another inside organisms. In fact, their ability to do so seems to be the key to their success.

Researchers at the Medical College of Wisconsin have now reconstructed the evolutionary history of a metamorphic human protein called XCL1. In one shape, it acts as a signaling molecule called a chemokine, binding to receptors on white blood cells and recruiting them to fight infections. But it can easily switch to a second shape that kills bacterial invaders as an antibiotic.

The Wisconsin researchers decided to learn about how metamorphic proteins evolve by looking at XCL1 more closely. Of the 46 chemokine proteins in humans, XCL1 is the only one that exhibits metamorphic switching. The others are stabilized by strong disulfide bonds that lock their protein molecules into a stable fold. But over the evolutionary history of XCL1, one of the disulfide bonds was lost, allowing a second conformation to emerge.

To reconstruct how that happened, the researchers used bioinformatics to infer the ancestral sequences for about 550 chemokines in today’s animals. Acacia Dishman, a graduate student, inserted the inferred DNA sequences into bacteria to resurrect the ancestral proteins. She then purified them, measured their biophysical properties and checked their structures with nuclear magnetic resonance for the distinctive “fingerprints” of the protein folds.

“This is advantageous, because the protein can maximize the right function at the right place and the right time,” said Acacia Dishman of the Medical College of Wisconsin.

Dishman found that the oldest ancestor had a single stable fold, the one common to all the chemokines. In proteins from a little later in the reconstructed evolutionary sequence, she detected two fingerprints, one for the ancestral fold but also one for a newer fold, although the new fold remained rare. Surprisingly, just a little later in the evolutionary sequence, proteins showed the opposite: They were mainly folded in the new conformation and only rarely in the ancestral conformation. Finally, in the modern XCL1, the two conformations were about equal, Dishman found.

The fact that the ancestors exhibited the two folds unevenly while the modern XCL1 exhibits both in equal proportion strongly suggests that the switching property “is not an accident or an artifact. It’s something that must have been beneficial and improved the fitness of the organism, because it appeared to be selected for,” said Brian Volkman, a biophysicist and senior author of the study, which appeared in Science on January 1, 2021.

The Advantages of Instability

But why would metamorphosis be better than having two specialized proteins? The scientists theorize in their paper about a couple of linked possibilities. If a single protein can do double duty, it spares the cell from transcribing, translating and maintaining more than one gene. But the more compelling advantage may be that the protein’s ability to transform may give the body a more dynamic way to control its defenses against bacteria.

Because XCL1 can adopt its two folded forms with equal probability, it can switch between them faster than once per second. But changes in the temperature or salt concentration or the introduction of binding partners can change that equilibrium. For example, around microbial pathogens, more of the XCL1 proteins get stuck in the conformation that interacts with the microbial membranes, shifting the balance toward that fold. Elsewhere in the body, the protein can adopt the other fold more often and bind to the receptors on white blood cells to mobilize them.

“This has the elegance of simplicity,” said Brian Volkman of the Medical College of Wisconsin.

“This is advantageous, because the protein can maximize the right function at the right place and the right time,” Dishman said. “This spatial and temporal regulation of functions based on a change in the folded structure could be a reason that metamorphic proteins might evolve.”

Metamorphic fold-switching also enables the body to eliminate an unwanted function simply by flipping the protein’s structure to the other conformation, rather than having to wait for the protein to be degraded. “This has the elegance of simplicity,” Volkman said.

The arguments for these apparent advantages can seem so convincing that they raise the question of why XCL1 is the only chemokine that evolved metamorphic folding. The researchers acknowledge that this is still a mystery.

Dishman is especially excited about the possibilities for designing metamorphic proteins that could have biomedical and other applications. She has been working with David Baker at the University of Washington on designing metamorphic proteins not seen in nature. Proteins that can adopt two different states essentially make a bistable switch, which could be useful for all kinds of things, like memory devices, motors or sensors, Baker says.

Protein structure prediction and design has progressed by leaps and bounds in the last decade, but most of those efforts were aimed at designing amino acid sequences that fold into a single thermodynamically stable, rock-solid structure. In contrast, “if you’re designing a protein and you want it to be metamorphic, you need to make sure that you make it relatively unstable, so that it will unfold and potentially switch on a relatively quick time frame, Volkman explained.

Baker added that it’s hard enough to design an amino acid sequence that adopts a single low-energy state; computing one that can adopt two different low-energy states with roughly equal probability is even harder. But given how useful these bistable switches could be, “designing proteins with multiple low-energy states is going to be really key,” he said. “I think this is a very important frontier for protein science.”

Lead image: Most proteins have only a single functional, folded configuration. But some can fold themselves into more than one shape to perform different jobs as needed. Credit: Samuel Velasco/Quanta Magazine