Groundbreaking results show that neutron stars of different masses may have the same size—upending astrophysical models. 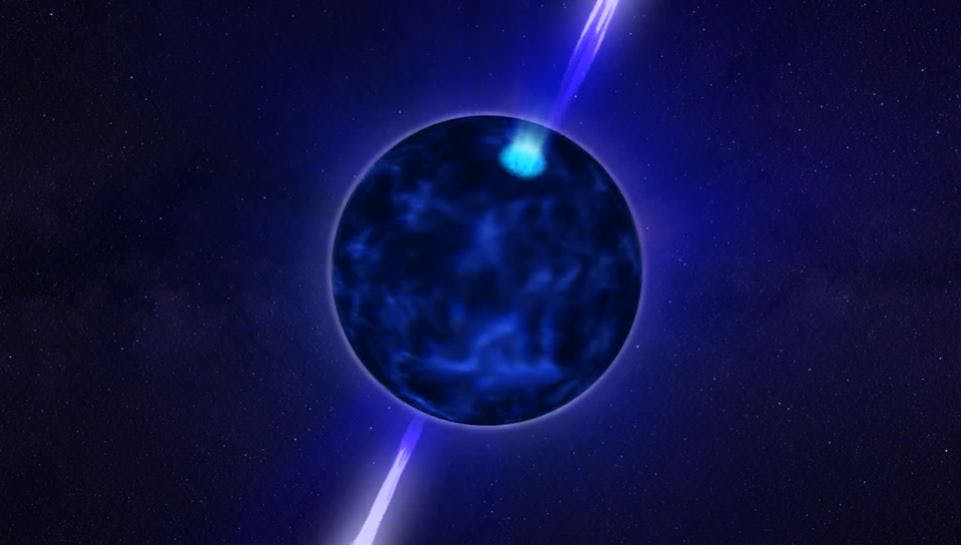 In the known universe, there is nothing quite like a neutron star. Born from supernovas, these objects contain a star-size mass in a city-size space. This unique trait has led scientists to believe that some extreme physics might take place in their innards—perhaps even the dissolution of neutrons themselves into a softer goo known as quark matter.

Yet we cannot peer inside neutron stars, so we must rely on the characteristics we can measure, namely their mass and size. Quark matter should be more compressed by the star’s gravity than intact neutrons, so if neutron stars are full of nuclear goo, they should not only be small, but grow smaller as their masses increase.

Unfortunately, it is exceedingly difficult to measure the width of a miles-wide object that’s thousands of light-years away. Combined measurements of neutron star mass and size are, to use a well-loved analogy, a “holy grail for neutron star physics,” said Micaela Oertel, a theoretical physicist at the French National Center for Scientific Research.

But then in 2019, NASA’s Neutron star Interior Composition Explorer (NICER), an X-ray telescope installed on the International Space Station two years prior, measured the size of a 1.4-solar-mass neutron star called J0030, which is 1,000 light-years from Earth, to be about 26 kilometers across. Now, using NICER data, two independent teams have performed the same analysis for another neutron star, J0740, located 3,000 light-years from Earth.

The results are surprising. With 2.1 solar masses, J0740 is the most massive known neutron star—about 50% more massive than J0030. Yet the two are essentially the same size—the two teams arrive at 24.8 or 27.4 kilometers across for the former, with uncertainties of several kilometers. The results were each posted to the online preprint site arxiv.org in early May 2021.

The finding implies that neutron stars may be bizarre, but not so bizarre that they obliterate neutrons themselves. “It might suggest these very exotic states of matter may not be realized in the core of a neutron star,” said Jorge Piekarewicz, a theoretical physicist at Florida State University.

The Search for Squish

Neutron stars are formed when a giant star between about eight and 20 times the mass of our sun exhausts its fuel at the end of its life. With no outward pressure to push against the star’s gravity, it collapses. The outer shells explode outward as a supernova, leaving only the dense core behind—the neutron star—packed into a volume the size of Manhattan.

Below a thin crust made of ions and electrons is the neutron star’s core, accounting for up to 99% of its total composition. Here, protons and electrons are squashed so tightly together that they form a sea of mostly neutrons. Push these densities even further toward the inner core, however, and something even stranger might occur. “Instead of individual neutrons and protons you have a sea of quarks, the constituents of neutrons and protons,” said Cole Miller, an astrophysicist at the University of Maryland and the lead author of one of the papers. “Where that happens is not clear.”

Until now, some models predicted that neutron stars of a sufficient mass—perhaps even J0740 at 2.1 solar masses—would create densities so immense that they would split neutrons and protons into their constituent quarks. As their innards experienced a transition from regular matter to relatively “squeezable” quark matter, “the radius should get smaller,” said Anna Watts, an astrophysicist at the University of Amsterdam and a co-lead on the other paper.

On the other hand, some models predicted the opposite. The phase transition—if it occurs at all—might not happen until close to the point where neutron stars collapse into black holes. (The precise dividing line isn’t known exactly but is believed to be around 3 solar masses.) “The question is,” said Watts, “if there is something strange that forms at high density, when does it kick in?”

If neutron stars like J0740 underwent this phase transition and contained more “squeezable” quark matter, it should have measured anywhere from 9 to 16 kilometers across, said Watts. Yet even with uncertainties taken into account, the researchers have established a “pretty strong lower limit” of 22 kilometers across, said Miller.

The results suggest that neutron stars form quark matter at some point beyond 2.1 solar masses, or perhaps never. Instead, protons and neutrons may simply persist even at the most extreme scales. “It certainly looks like the most squishy models are ruled out,” said Watts.

NICER can measure neutron star radii because of  a quirk of neutron stars themselves. As they rotate rapidly, hot spots on their surface—magnetic poles like those found on Earth, but greatly magnified—spin along with them, flashing X-rays. Because of neutron stars’ intense gravity, even flashes that happen on the far side of the star will get bent by gravity and sent our way. NICER precisely measures the arrival times of these X-ray flashes, which allows scientists to reconstruct the neutron star’s size.

A separate result from the Lead Radius Experiment (PREx) at Jefferson Lab in Virginia appears to support NICER’s transformational findings. By firing a beam of electrons into lead, scientists discovered that the so-called neutron “skin”—the amount of space neutrons take up in a lead atom—was greater than the proton skin. This difference suggests that neutron stars should be up to 2 kilometers larger than previous predictions. “That’s completely consistent with NICER,” said Piekarewicz, part of the PREx team. The results were published in Physical Review Letters.

The NICER results are still in an early stage. They will need to be checked and the uncertainties refined. The radius of a third neutron star is in the process of being measured, which could play a large role in confirming or refuting the findings. “We expect we’ll be able to announce [its size] later this year,” said Zaven Arzoumanian, the science lead on NICER at NASA’s Goddard Space Flight Center. “And then maybe a few more beyond that.”

But so far, the results are pointing toward something intriguing. Even neutron stars, the densest collections of matter in the universe, might not be dense enough to produce some forms of exotic matter. “This is the first strong evidence against a dramatic phase transition in the core of neutron stars,” said Piekarewicz. And if it doesn’t happen in neutron stars, can it happen anywhere else? “I’m afraid not.”