Stable Perception in the Adult Brain

Neurons return to their original state after a change. 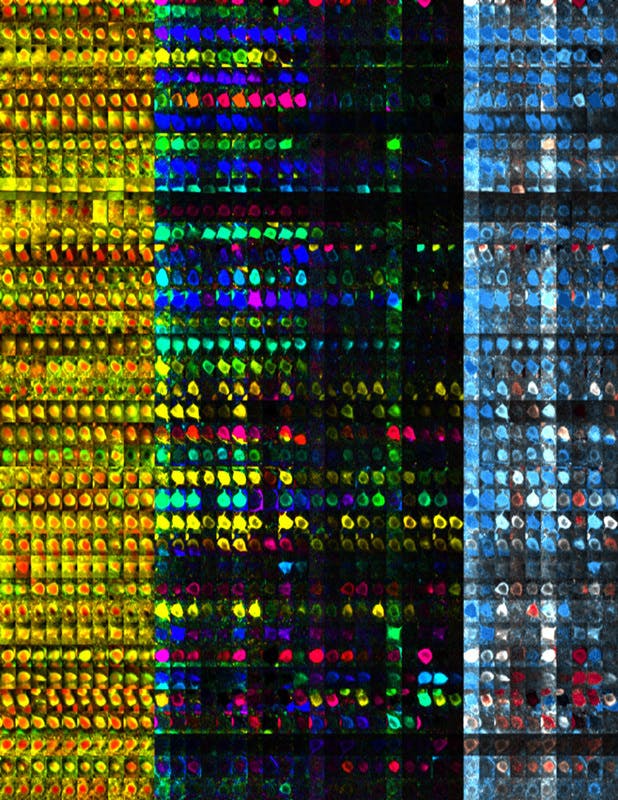 The adult brain has learned to calculate an image of its environment from sensory information. If the input signals change, however, even the adult brain is able to adapt − and, ideally, to return to its original activity patterns once the perturbation has ceased. Scientists at the Max Planck Institute of Neurobiology in Martinsried have now shown in mice that this ability is due to the properties of individual neurons. Their findings demonstrate that individual cells adjust strongly to changes in the environment but after the environment returns to its original state it is again the individual neurons which reassume their initial response properties. This could explain why despite substantial plasticity the perception in the adult brain is rather stable and why the brain does not have to continuously relearn everything.

Everything we know about our environment is based on calculations in our brain. Whereas a child’s brain first has to learn the rules that govern the environment, the adult brain knows what to expect and, for the most part, processes environmental stimuli in a stable manner. Yet even the adult brain is able to respond to changes, to form new memories and to learn. Research in recent years has shown that changes to the connections between neurons form the basis of this plasticity. But, how can the brain continually change its connections and learn new things without jeopardizing its stable representation of the environment? Neurobiologists in the Department of Tobias Bonhoeffer in Martinsried have now addressed this fundamental question and looked at the interplay between plasticity and stability.

The scientists studied the stability of the processing of sensations in the visual cortex of the mouse. It has been known for about 50 years that when one eye is temporarily closed, the region of the brain responsive to that eye increasingly becomes responsive to signals from the other eye that is still open. This insight has been important to optimize the use of eye patches in children with a squint. “Thanks to new genetically encoded indicators, it has recently become possible to observe reliably the activity of individual neurons over long periods of time,” says Tobias Rose, the lead author of the study. “With a few additional improvements, we were able to show for the first time what happens in the brain on the single-cell level when such environmental changes occur.”

The scientists observed under the microscope that around two-thirds of neurons normally assigned to the closed eye now respond to signals from the other, open eye. “However, the really exciting finding was that those neurons resume their original activity as soon as they begin receiving information again from their designated eye,” explains Tobias Rose. When the experiment was repeated, exactly the same cells changed. Because of the extensive changes in the region of the brain responsible for the two eyes, the scientists had suspected that the changes would more likely occur on the entire population of cells, such that after recovery different neurons and new connections would now carry the information form the reopened eye. “However, it is almost as if the individual cells remember their initial connections before the eye was closed and are then able to restore them.”

These findings suggest that neurons that respond to changes have stable connections that allow them to return to their original state. This would allow the adult brain to adapt to changing environmental conditions without completely altering its basic wiring. “Such ‘backbone synapses’ were postulated some time ago in theoretical studies,” says Tobias Bonhoeffer. “Finding them will be the next challenge.” But this is not the only task facing the researchers: A third of the cells either did not change at all or behaved contrary to all conventional theories. “We still don’t know exactly why these cells behave as they do, but we already have ideas that we need to test,” says Tobias Bonhoeffer, looking forward to further research.

Lead image: Active neurons of the visual mouse cortex at changed sensory stimuli. The images in one row show one single nerve cell each. Each field of a color block corresponds to one study (10 in total) over a period of two months. The partial images of the left block (yellow / red) show the structure of a nerve cell. In the middle two blocks the colors correspond to how strongly a cell responds to visual stimuli of different orientations. The second block represents the eye opposite to the examined brain hemisphere (here, the left eye). The third block corresponds to the right eye. The right block (blue / red) represents the relative response strength of the cells with stimulation of the dominant left eye (contralateral) relative to the right (ipsilateral) eye (contralateral: blue; ipsilateral: red; binocular dominance: white). After closure of the left contralateral eye, some cells are more sensitive to the eye which remained open and thus appear red after the third and seventh investigation. Credit: © MPI f. Neurobiology/ T. Rose

This article was originally published by Max Planck Neuroscience on June 9, 2016. The relevant study can be retrieved here.