lattices in which smaller particles roam like electrons in metallic bonds. 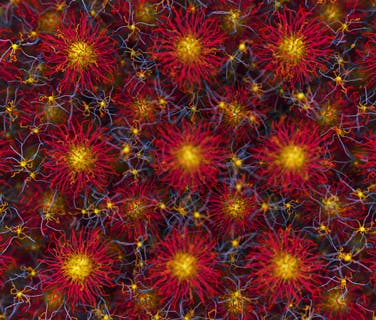 Chad Mirkin didn’t set out to discover a new property in matter. But when you’re inventing an alternative to atom-based chemistry, something strange is bound to happen.

For years, he and his colleagues had been exploring something he called “programmable atom equivalents”—tiny nanoparticles, covered with strands of DNA, that mimic the bonding behavior of atoms. But unlike atoms, which are limited to what you find on the periodic table, nanoparticles and DNA bonds can be designed in a nearly infinite number of ways.

Mirkin, a chemist at Northwestern University, had been working with Monica Olvera de la Cruz, a physicist at Northwestern, to explore how these nanoparticles assemble themselves into regular patterns. Such “colloidal” crystals can be found in nature—opals are formed from tightly packed bits of silica—but researchers had been engineering hundreds of others in the lab in the hope of developing colloidal crystals with novel and useful properties.

But an odd thing happened when the teams mixed their tiniest particles with larger ones to make colloidal crystals. The larger particles arranged themselves into a crystal lattice as expected, but the smaller ones roamed freely throughout the structure. And yet, the presence of these tiny, roving particles seemed to be instrumental in keeping the larger particles in place, the teams reported in Science.

“You have these mobile entities, these mobile nanoparticles, that serve as bonding agents,” said David Pine, a New York University physicist who was not involved in the study. “It’s a new property of the material.”

The teams drew parallels between the behavior of these nanoparticles and that of electrons in a metal. In a metal, atoms form a fixed structure, but electrons weave all over the place, unbound to any single atom.

“From the theoretical point of view, it’s very exciting,” said Olvera de la Cruz. “What are the physical properties that this matter will have when it’s organized by this new bonding?”

Mirkin first proposed using DNA to dictate how nanoparticles connect to each other in 1996. His idea was to take each individual nanoparticle and coat it with strands of DNA, making it resemble a sticky hard candy that’s found under the couch coated with a tangle of cat hair.

“You could synthesize strands of DNA and attach them to particles and kind of create chemically specific Velcro designed to recognize other Velcro balls,” Mirkin said.

In their recent experiments, the team was trying to gain better control over the size of the nanoparticles and the locations of the DNA strands. That way they could better engineer materials with novel physical properties.

To this end, the team worked to create especially tiny nanoparticles. A typical nanoparticle might be 10 nanometers wide, constructed from hundreds of thousands of gold atoms, with 150 or so DNA “linker” strands dangling off its surface. With such large numbers, it’s difficult to control exactly how many gold atoms your particles are made of and where the DNA strands are attached.

So the researchers turned to smaller particles, which would be more consistent. The team created nanoparticles that were 5, 2 and 1.4 nanometers wide. The smallest ones were made up of a few hundred gold atoms and featured just a handful of DNA strands hanging off them.

These smaller particles moved throughout the crystal, forming only loose connections with one complementary particle after another. But since the 10-nanometer particles were all of the same type and unable to bond to each other, this transient bonding with the smaller particles must still have worked to keep the larger nanoparticles in place.

The research team compares this new behavior to metallic bonding, in which electrons in a metal wander among the stationary metal ions, not bound to any one ion but holding the entire structure together.

“[We] discovered this phenomenon and said, ‘Wow, this is really bizarre. This is unusual. Let’s follow it.’ And that’s the way science works,” Mirkin said. “You find along the way that there are equally or even more interesting things to pursue through that discovery process.”

The team also observed that in some cases, such as when they increased the number of DNA “linkers” on the small particles or decreased the temperature, the smaller particles stopped roaming and stayed in fixed locations. This behavior is akin to a phase transition, the researchers said—like when a metal changes from a conductor to an insulator under certain conditions.

It’s too early to tell where this discovery might lead, but one possible avenue to explore is whether mobile nanoparticles will let these materials transport heat, something that wasn’t possible with colloidal crystals made of stationary particles, according to Alex Travesset, a physicist at Iowa State University and an expert at modeling DNA-covered nanoparticles who was not involved in the study.

“Every time that we are able to expand this field and consider new types of bonding, as in this case,” Travesset said, “that opens a completely new door of possibilities at the fundamental level that is trying to push the boundaries of what we understand.”

Lead image: Nanoparticles covered in “linker” strands of DNA can arrange themselves into novel forms of matter. Credit: DOI: 10.1126/science.aaw8237