Stress on Simulated Mars Was Not What I Expected 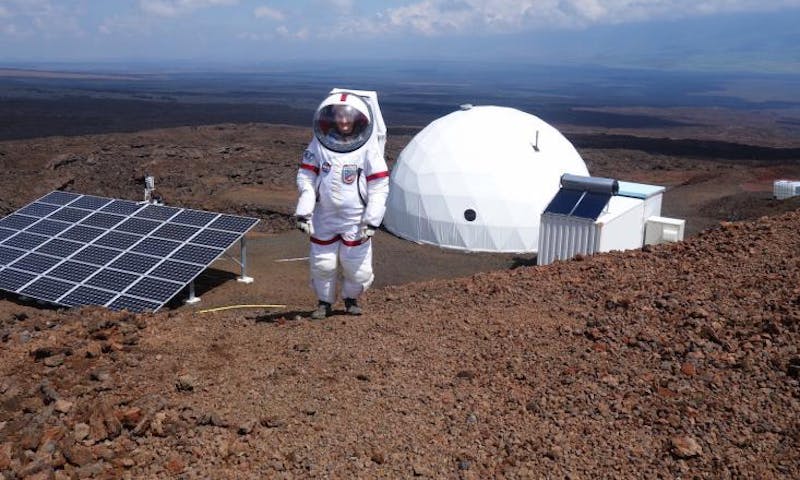 For 6 crewmembers who have supposedly traveled 150 million miles—and were, beforehand, complete strangers—we have remarkably little space. For more than 100 days we’ve been conducting NASA-sponsored studies at HI-SEAS—Hawai’i Space Exploration Analog and Simulation—8,000 feet above sea level, in a dome around the size of a 3-bedroom apartment without real-time communication, to help understand how humans can survive a journey to Mars and back. We’ll be here for eight months more.

We are not testing our physical endurance. The prototypical stressors of being off-planet—constant physical danger and dinner that won’t stay put if you let it out of the bag—don’t apply: Gravity is normal, air-pressure is more-or-less full, and rescue helicopters are an hour away, in case of danger. Instead, we’re studying personal and collective psychological survival. “Your fellow crewmates” may not spring immediately to mind as a stressor, but it should—especially in space, where the same other people around are always around.

Confinement in this isolated habitat is expected to wear us down, both physically and mentally. But interestingly, we don’t feel locked-in and unable to find personal space yet, as might be expected. In fact, once or twice over the past 3 months, I became suddenly, almost painfully aware that I was alone. In those moments, the crew was scattered around the 1,400 square-foot dome, in the server room, in the workshop, in the biology lab, and in their private bunks. The unexpected solitude—which might have gone on for as long as five minutes—was quite disorienting. Others on the crew have reported the same time reaction. Not a sense of being crowded, but rather its opposite: nearly a fear of not being near someone at all times.

Given the history of long-duration missions, this is markedly different from what I expected. After a honeymoon phase, space crews in circumstances like ours—crowded, separated from home and family, and stuck in banal routines—can become listless and depressed. Whether in real or simulated space, the daily and weekly regimentation of everything we do for the sake of safety and efficiency—like swapping air filters, filing reports with ground control, running someone else’s experiments, and so on—as well as our lack of power to break or even affect the pattern, can become oppressive. The Russian space program dubbed the dysphoria that consequently arises “asthenia”, meaning “without strength.”

On sMars, the conditions for asthenia are certainly in place. At various points in the last 100 days, our confinement and isolation has left most of us feeling restless, bored, or slightly trapped. Social media is no refuge, since it’s used mainly for outreach and by mission support. If we want to talk to someone outside this dome, we send an email, a voice recording, or a video, and wait at least 40 minutes—to simulate the distance between Earth and Mars—for a response. As for popping out for a drink …Let’s just say it’s not so easy to sip espresso while tucked into a spacesuit: the only way we go outside on simulated Mars.

I’ve kept an eye out for interpersonal stress, and weakness from it. Instead, I’ve found a heightened awareness of interdependence.

Yet, through it all, asthenia has yet to appear. Here’s why, I think: On sMars, each of us knows how un-alone we are and how essential each person on our mission is. The doctor, the biologist, the physicist, the soil scientist, the engineer, and the architect count on each other for nearly everything we need. I don’t grow the crops, repair the drones, extract the water from the ground, or fix the hab. Other people, backed by distant mission support, do that, every day.

As the crew physician, my job is to be responsible for everyone’s physical well being; looking after our minds goes hand-in-hand. I’ve kept an eye out for interpersonal stress, and weakness from it. Instead, I’ve found a heightened awareness of interdependence. When no one in this dome is replaceable, and when the expectation of seeing one of these crucial crewmembers is disappointed, that’s extremely stressful—far more so than sharing a small space with five others I’ve come to depend on for my daily survival.

So far, this truth—that we rely on one another completely—has kept our world here peaceful, eclipsing personal grudges and pettiness; and, possibly, fending off asthenia, at least for the time being.

The flip side of our mutual reliance has been these surprising and intense flashes of loneliness when no one is around. Fortunately, they do not require a medical intervention. They are rare, and, unlike asthenia, never happen when we’re working on a task. In many ways, this reaction to being alone is the embodiment of normalcy, one of the few that I can cite these days. Almost everything around me here combines the mundane and the otherworldly: The dome, decorated with grow lights, is filled with the sound of the hydroponics system, and a street bike we’ve pressed into service generates power.

I wonder how, in the end, the data from our one-year experiment will reflect our unique circumstances. For now, I can say that despite being research subjects, we are faring far better than rats in a maze; far better, I’d argue, than many crews in similar simulations and even some real space crews. Months after we last spoke to our loved ones in real time, hunkered down in a small dome on barren mountainside miles from anyone save ourselves, we feel strong.

Sheyna Gifford started working in the field of astrophysics while at UC Berkeley and went on to earn an MD and later a master’s degree in journalism at USC. When not in simulated space, she lives in St. Louis with her husband and their two cats. Read her Nautilus post: “What It’s Like to Be the Only Doctor in Space.”