In the fight against viruses and other pathogens, scientists are looking beyond genes and proteins to the complex sugars, or glycans, on cell surfaces. 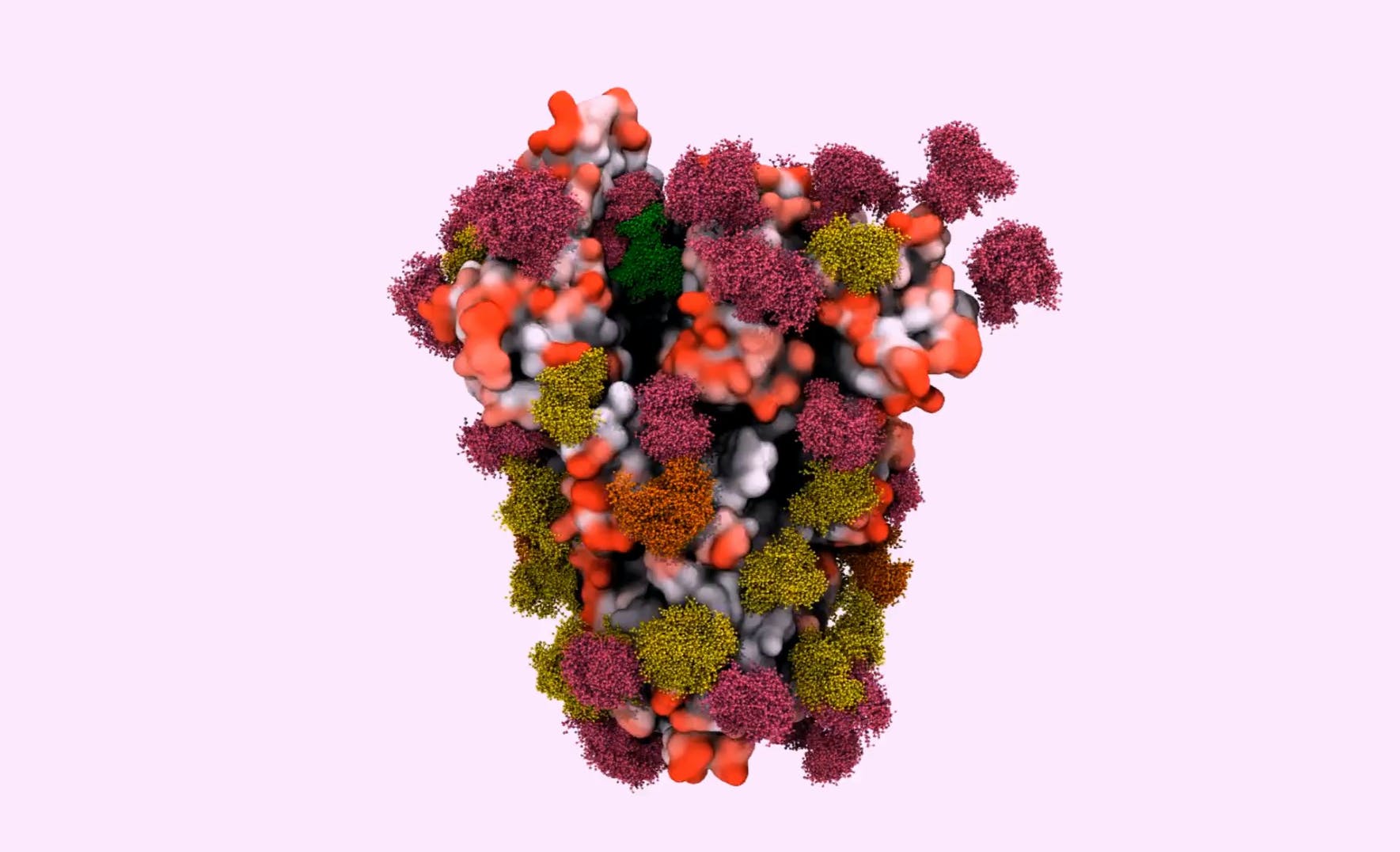 Cells are furry. That might come as a surprise, since textbook illustrations so often represent a cell as smooth—“something like a balloon full of water,” said Elisa Fadda, a computational chemist at Maynooth University in Ireland. “But that is absolutely not true.” In reality, the surface of a cell is adorned with a forest canopy of sugars, intricate and diverse clusters of carbohydrates that extend like branches and leaves from protein tree trunks. And because that canopy is the face that a cell shows to the world, these complex carbohydrates, or glycans, play a critical role in its encounters and interactions with other cells or molecules.

The prominence of glycans in biomedical research has been rising for some time, as researchers have explored how the sugars help to activate, regulate and direct the immune response. The study of glycans’ structure and function in human health and disease has already led to a better understanding of various pathogens and to novel therapies and vaccines. But the COVID-19 pandemic has brought greater urgency to the subject because many scientists believe that knowledge of glycans could prove essential for combating the SARS-CoV-2 virus. Several research teams have already published the first detailed models of the virus’s glycans—models that point to the pathogen’s potential vulnerabilities.

The Many Vital Uses of Sugars

There’s a reason why genomics and proteomics have leapt ahead of glycomics: The sheer complexity of sugars makes them more difficult to study. DNA, RNA and proteins are linear molecules built according to defined sets of rules, and scientists have the tools to sequence, analyze and manipulate them. But glycans are branching structures that assemble without a known template. The same site on two identical proteins might be occupied by very different glycans, for instance. Glycans also have exponentially more potential configurations than DNA or proteins: Three different nucleotides can make six distinct DNA sequences; three amino acids can make six unique peptides; three glycan building blocks can form more than a thousand structures. Glycans are flexible, wobbly and variable; intricate, dynamic and somewhat unpredictable. Their analysis demands greater technical expertise and more sophisticated equipment.

As a result, “the area of glycobiology has been more of a specialist subdiscipline,” said Max Crispin, a glycobiologist at the University of Southampton in England and one of the leaders of the SARS-CoV-2 work on glycans (part of which was published in early May 2020 in Science).

During the 2010s, however, it’s become apparent that these carbohydrates need to be taken into wider consideration in biology. “The sugars aren’t just Christmas lights there to make things happy,” said Victor Nizet, a researcher in pediatric medicine at the University of California, San Diego who specializes in host-microbe interactions and infectious disease. “They’re a critical element of the structure of the house.”

Glycans help to stabilize proteins and to ensure that they get folded properly. As receptors on the surfaces of cells, they regulate cell function and movement. They’re involved in processes ranging from growth factor signaling to the binding of sperm and egg. They determine a person’s blood type. They have been implicated in cardiovascular disease, diabetes and other medical conditions.

“They really play an enormous diversity of roles in the body, and we’re kind of just starting to understand the composition of these glycans and where they reside,” said Andrew Ward, a computational biologist at the Scripps Research Institute in California.

Without taking sugars into account, we can’t fully understand how proteins and cells interact and function. “Imagine a world in which each of us knew only a fraction of the alphabet,” wrote Jamey Marth, a molecular biologist at the University of California, Santa Barbara, in a letter to Nature Cell Biology.

The rise of glycobiology has been particularly transformative to immunology. Glycans help to activate, traffic and regulate immune cells. Certain immune cells are primed to recognize both human and nonhuman sugars, so that they can mount a response to the latter or stand down in the presence of the former.

Bacteria and viruses have evolved to take advantage of that fact. According to Nizet, pathogens make use of glycans “every step of the way” in their interaction with the host—in gaining access to and invading host cells, in migrating to different target tissues, in evading the immune system, in inducing inflammation that can lead to certain disease symptoms.

But scientists didn’t start making many of those connections until they began to tease apart the biology of HIV, the human immunodeficiency virus. “Really, HIV work has laid the foundation,” Ward said—particularly when it comes to guiding efforts to create effective vaccines and treatments. “We’ve learned a heck of a lot about glycans because of that.”

Now, “if you go to an HIV vaccine conference, it’s basically a very high-level glycobiology meeting,” said James Paulson, a molecular biologist at Scripps. “Almost every HIV vaccine person thinks of the sugars first when they’re designing a vaccine.”

That’s primarily because HIV coopts its host’s cellular machinery to blanket itself in human glycans. The surface protein on the virus that allows it to bind to and enter human cells is completely covered by these sugars: At least half of the working protein’s mass is carbohydrate. This so-called glycan shield camouflages the virus as “self” to hide it from the immune system. “It’s like a wolf in sheep’s clothing,” said Philip Gordts, a glycobiologist at the University of California, San Diego.

In fact, researchers began to realize that HIV is covered in so many glycans that “it almost overbakes the protection,” Crispin said. There’s such a high density of sugars that not all of them are accessible to be chemically modified as human glycans typically would be. Some glycan patches on the virus consequently remain in a less mature, more primitive chemical form.

Those primitive glycan patches are both crucial to HIV’s success and a key weakness. By presenting the patches to circulating immune cells, the virus gets taken to lymph nodes where it can infect the T cells that are its primary target. But after a few years, in about one-third of chronically infected patients, the immune system starts to recognize those glycans as foreign and generates antibodies to fight the pathogen.

In fact, when the first of these antibodies was discovered, researchers were shocked to see that it recognized a particular cluster of glycans on HIV. Antibodies usually target proteins, not sugars—and these sugars seemed particularly unlikely targets because they had been made for the virus by human cells; going after them could lead to an autoimmune response. “That was the entrenched dogma,” Crispin said, “that you couldn’t get antibodies against those sugars.” (Researchers were so certain of this that they dubbed HIV’s sugar-covered surface the “silent face.”)

But since then, many more such antibodies have been identified. Many of them have evolved to recognize some combination of protein and glycan. Others have evolved to cope with glycans that block access to their protein targets. “So the sugars are entirely shaping all of the broadly neutralizing antibodies,” Crispin said.

The researchers realized that a vaccine might therefore have to include glycans to properly stimulate the immune system to fight off HIV. A vaccine that evoked a response against naked viral proteins might not be effective against the real virus, which hid those proteins behind a glycan shield.

Similarly, there are ongoing efforts to develop new inhibitors of HIV that recognize its glycans. Some of these antiviral treatments are in clinical trials.

An Essential but Vulnerable Shield

A dense glycan shield also protects influenza viruses, not only by masking them from the immune system but by helping the flu become a moving immunological target. The viruses can easily add sugars where there were none, rendering previously effective antibodies powerless.

But they rely on glycans in other important ways as well. Influenza attaches to a prevalent glycan on host cells when inserting itself into them. In effect, the sugar determines what tissues the virus infects—and what species. When mutant strains of bird influenza jump into human hosts, for example, it is often because the virus’s interactions with certain glycans have changed. “It is only a slight difference in glycans that protects humans from avian flu,” said Gordan Lauc, a glycobiologist at the University of Zagreb in Croatia.

“Almost every HIV vaccine person thinks of the sugars first when they’re designing a vaccine,” said James Paulson at the Scripps Research Institute.

The influenza virus also relies on an enzyme that cuts glycans away to escape host cells and spread throughout the body. Several effective flu antivirals, including Tamiflu, inhibit those enzymes.

Bacteria use glycans to masquerade in the body, too. Some bacteria coat themselves in sugar capsules meant to mimic human glycans; glycan-based vaccines have proved effective against them. Other pathogens shed glycans as decoys to draw away the immune system’s fire. Several autoimmune disorders (such as Guillain­­-Barré syndrome) stem from an invader’s glycans triggering antibodies that then cross-react with healthy human tissues.

Scientists are now directing their attention to the glycans that cover the SARS-CoV-2 virus to gain a better understanding of how COVID-19 works. They have found that the spike protein used by the coronavirus to bind to human cells is covered in a glycan shield—but one less dense than that of HIV and many other viruses. Moreover, those glycan sites don’t seem to mutate to the extent that they do in the flu.

“That suggests that antibodies may be a successful tool against SARS-CoV-2,” Lauc said. Although glycans protect certain regions of the spike protein, there are enough holes in that protection to make researchers suspect that the glycans play another role as well. They are now building models to tease apart those possible functions, which could range from maintaining the stability of the viral protein to helping it bind to the cells it infects.

A team of scientists uncovered a potential antibody treatment that includes glycans. Other investigations underway are pinpointing unshielded regions of protein and glycan-protein combos as vulnerabilities to target. (That said, the COVID-19 vaccines now in clinical trials seem to be DNA- or RNA-based.)

“Whenever you have a new virus like this, you have to open your eyes to almost everything,” Paulson said. Lauc, for one, is collecting COVID-19 data on thousands of individuals whose glycans had previously been analyzed; he hopes to determine whether sugar patterns can help predict the risk of infection or susceptibility to more severe symptoms. Other researchers are directing this kind of work to scores of diseases, including cancer.

Lead image: In this model of the surface spike protein that the SARS-CoV-2 virus uses to infect human cells, the glycans look like a forest canopy atop the folded peptide inside. Researchers hope to use such models to pinpoint vulnerable regions of the protein (colored in red), as well as shielded regions that likely won’t be effective vaccine targets (black). Credit: doi: 10.1101/2020.04.07.030445