The twisting loops of the sun’s magnetic field control the flow of charged particles throughout the solar system. For the first time, researchers have created a scale model of this mysterious environment. 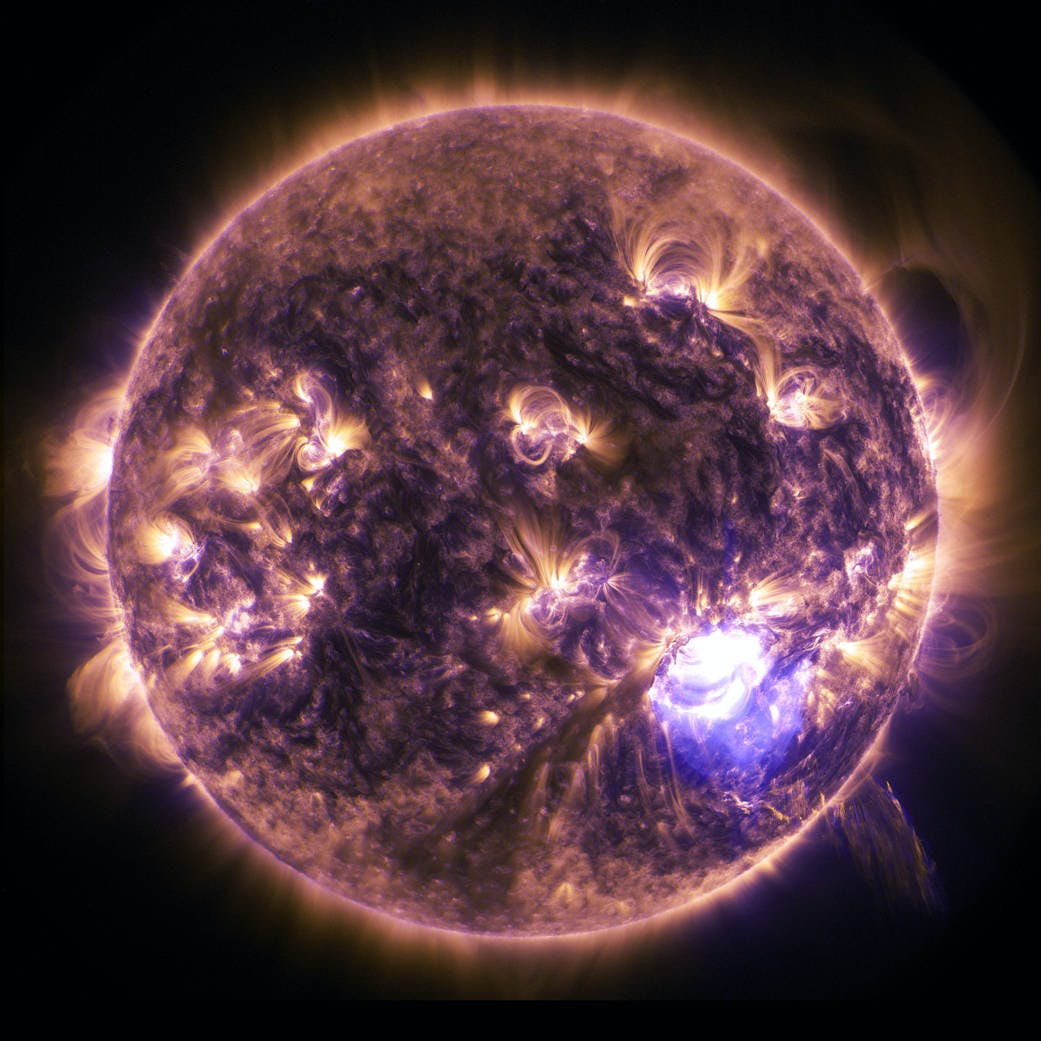 Even a celestial body as familiar as the sun has a few secrets. Above the sun’s visible surface, hot gases made up of charged particles stretch into space to form the sun’s superheated outer layers, including the streaky corona, which can be seen looking like a lion’s mane during a total solar eclipse. Some process heats up these plasmas in the corona to millions of degrees and makes them speed away from the sun as solar wind.

Exactly how these plasmas escape the sun’s magnetic fields is still a mystery. “A lot of the open questions about the sun eventually come down to the magnetic field” because magnetic fields govern much of the sun’s activity, said Therese Kucera, an astrophysicist at NASA’s Goddard Space Flight Center who studies the sun’s atmosphere.

The sun’s magnetic fields form enormous loops that extend from the sun’s surface into space. Some of these loops are small enough to fit entirely within the sun’s corona, while others stretch to the edges of the solar system.

In general, these loops trap plasmas because charged particles travel along magnetic fields rather than across them. Some plasmas escape from the sun by following the loops that extend far into the solar system. These plasmas become the so-called “fast” solar wind. Scientists think that blobs of plasma can also break out of the smaller loops to generate the “slow” solar wind. The loops break and reattach themselves in a process called reconnection, sloughing off some of the trapped plasma. But the details of where and how magnetic reconnection happens have eluded us.

“We want to do more than just wave our hands and say, ‘Oh, it must be related to reconnection somehow,’” Kucera said.

So a team of researchers decided to try to re-create the sun’s magnetic field structure in a ball of plasma in their laboratory.

How do you make a sun in the lab?

The simplest model for the sun’s magnetic field would be a bar magnet, or dipole, which has a north and south pole. Its magnetic field extends from one pole to the other.

Of course, the sun is more complicated than a bar magnet. The sun spins, twisting the magnetic field into a swirling pattern known as the Parker spiral. And the streams of plasma emanating from the sun pull parts of the magnetic field with them like rubber bands, stretching the loops all the way to the edges of the solar system.

A research team at the University of Wisconsin, Madison, built each of these factors into their laboratory model. Inside a 3-meter-wide plasma containment chamber—the “Big Red Ball”—the team placed a cylindrical permanent magnet about 10 centimeters wide and 10 centimeters long. This was their starter sun. They then filled the ball with a plasma made from helium gas and drove an electrical current through it, which created a force on the plasma that made it spin around the dipole.

“That creates a spinning plasma in a dipole magnetic field, similar to the sun,” said Ethan Peterson, a plasma physicist at Wisconsin. With this technique, the team was able to successfully re-create the shape of the Parker spiral, as they describe in a paper published today in Nature Physics.

The experiment was also able to mimic a region around the sun where the plasma hangs in a precarious balance. Within this boundary, plasmas are contained by magnetic fields, but outside it, centrifugal forces from the sun’s rotation overpower the magnetic fields, and plasmas stream outward. The researchers found that “if you spin [the plasma] hard enough, you can get it to spin out from centrifugal force,” Peterson said. The team believes that the plasma blobs they generated are analogous to those in space that fuel the sun’s slow solar wind.

Some aspects of the model, like the density of the plasma and its proportion of charged and neutral particles, don’t reflect the composition of the real sun’s corona and solar wind. But the experiment is still informative, said Aleida Higginson, a solar physicist at the Johns Hopkins University Applied Physics Laboratory who works on simulations of the solar wind and was not involved in the study. “We’re talking about lab conditions on Earth versus the sun, so there are obviously going to be some differences. I’m still impressed,” she said. “If they really did get reconnection, and got blobs, I think that’s really cool and promising.”

Why is it so hard to study the real sun?

“Space is really big,” Kucera said. A space probe can only be in one place at a time. Whether it’s taking images of the solar wind so researchers can better understand its structure or making measurements of magnetic field strengths and particles streaming by, any space probe can only investigate a tiny fraction of the sun’s environment. “We would love to be able to sample everywhere. But obviously, we can’t do that.”

A lab experiment like this one, on the other hand, lets researchers get the big picture. They’ve fit the whole solar system into a 3-meter-wide ball, after all.

A lab model also lets researchers experiment in ways they can’t in the real world.

“Because they’re a lab experiment, they can change some of their parameters, right?” said Stuart Bale, an astrophysicist at the University of California, Berkeley, and the leader of an experiment on the Parker Solar Probe, a spacecraft that launched last year. “And we can’t. The sun does what it’s going to do.”

As the Parker Solar Probe circles the sun over the next few years, it will pass through the corona and collect data that researchers can compare to the laboratory results.

Video: Plasma in the experiment tended to follow the spiraling patterns of the magnetic field, forming bright arcs inside the Big Red Ball. Credit: Douglass Endrizzi