The absence of supersymmetry particles at the Large Hadron Collider has settled a 16-year-old bet among physicists. 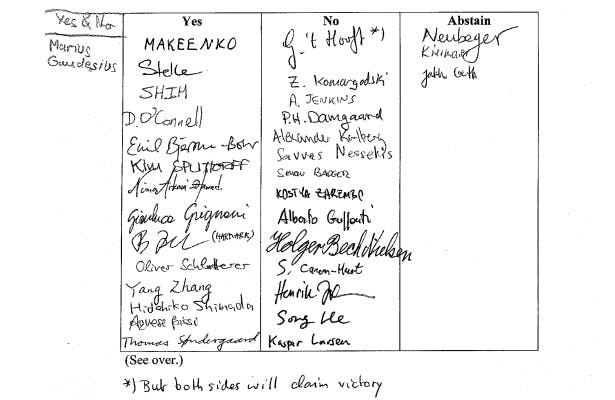 Physicists gathered in Copenhagen today to settle a high-profile wager on a leading theory of nature. The bet, made in 2000 just as construction began on the Large Hadron Collider (LHC) — the world’s biggest atom smasher — forced several renowned physicists to put their money where their theories were. Each participant staked a position on whether at least one of the particles predicted by an elegant theory called supersymmetry would be experimentally detected within 10 years.

In light of construction delays and a breakdown at the LHC, everyone agreed to extend the deadline. The five-year extension signed in June 2011 came due this summer, and no supersymmetry particles have shown up.

At today’s meeting, hosted by the Niels Bohr International Academy, the 20 physicists who signed “Yes” on the 2011 addendum were declared the losers, each owing a bottle of “good cognac at a price not less than $100” to be shared among the 24 winners, who bet against supersymmetry’s discovery. The adjudicator, Nima Arkani-Hamed of the Institute for Advanced Study, who signed “Yes,” bestowed his bottle on a victorious Poul Damgaard of the Niels Bohr Institute.

Stephen Hawking, who did not sign the supersymmetry wager, was on hand to see the outcome. “If I had signed up to the bet,” he told the room, “I would have voted ‘No.’” (Hindsight, it should be noted, is 20-20.)

During a panel discussion, the Nobel-Prize-winning physicist David Gross, who did not sign the Copenhagen document but lost a separate bet over the absence of supersymmetry, said that he will continue to believe in the theory, even though it apparently does not take its simplest or most accessible form. “In the absence of any positive experimental evidence for supersymmetry,” Gross said, “it’s a good time to scare the hell out of the young people in the audience and tell them: ‘Don’t follow your elders. … Go out and look for something new and crazy and powerful and different. Different, especially.’ That’s definitely a good lesson. But I’m too old for that.”

Update: Video from today’s meeting in Copenhagen is now available.

Lead image: The first page of signatures on a 2011 amendment to a supersymmetry bet originally placed in 2000. Courtesy of Poul Damgaard