For sea life, the ocean is becoming an intolerable racket. 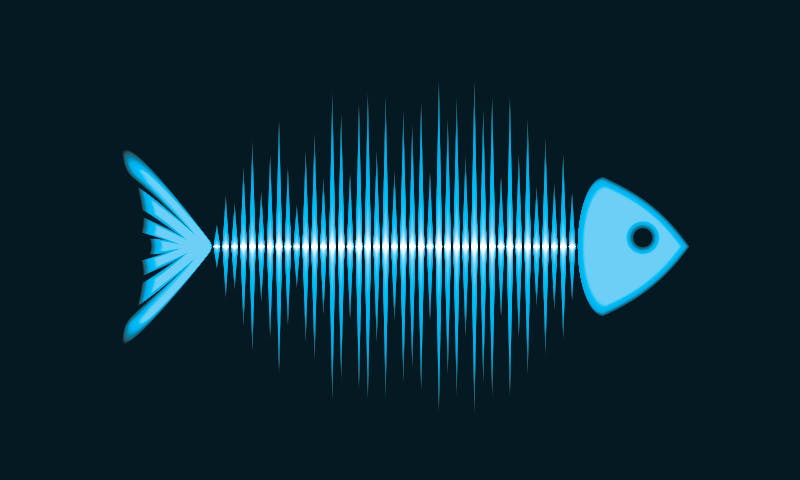 Marine biologist Heather Spence found her way to the underwater world of sound through her love of music. As a composer and vocalist who also plays viola da gamba, piano, and cello, Spence wanted to understand how sound works, how it manifests across different environments. She pursued a Ph.D. in bioacoustics, and halfway through her studies, came across the snapping shrimp, also sometimes called pistol shrimp: a tiny creature that snaps its one oversized claw so fast it creates a vacuum bubble that bursts with a bang that is one of the loudest sounds in the ocean, audible even above water. “It’s this little critter, the size of your pinky finger, that makes all of this noise,” says Spence.

Spence was enthralled by the outsized anecdotes that accompanied the tiny crustacean. Two decades ago, in order to find what exactly makes the sound, a team of scientists tied seven pistol shrimp to a hydrophone and took 40,000 frames per second with an ultra-high-speed camera.1 When the shrimp’s air bubble explodes, it releases heat of at least 8,000 degrees Fahrenheit, six times the hottest temperature of lava when it is first ejected from a volcanic vent.2 The underwater racket of colonies of snapping shrimp interfered with the sonar communication of the United States Navy trying to detect enemy ships during World War II. (You can listen to the pistol shrimp cacophony here.) For the species, the sound is a matter of life or death.3 They use it to talk to one another, to defend their territory, and to stun their prey (which they then dismember and devour). “I think there’s so much more that we could understand about what’s going on in the ocean if we could really tune in with our ears,” says Spence.

Human noise leads to hearing loss and stress in sea animals and forces them to flee their habitats.

Aristotle made the first documented claim that sound could be heard in water as much as in air in the 4th century B.C. Almost 17 centuries later, Leonardo Da Vinci observed that marine vessels—which at the time were propelled by wind or oars—could be heard underwater. “If you cause your ship to stop and place the head of a long tube in the water and place the outer extremity to your ear,” he wrote, “you will hear ships at a great distance from you.” In 1743, Jean-Antoine Nollet, a French Catholic abbot who discovered osmosis and contributed to the theory of electricity, confirmed that sound carried in water when he ran his own simple experiments: He is said to have stuck his head underwater while his assistants fired a pistol and rang a bell (he had expelled the dissolved air from the water first).

In the Western world, the more specialized study of sound in the ocean and how it propagates goes back about a century, but it’s been hampered by a “niche specialist kind of label,” says Spence, who is also a marine and science advisor to the water power technologies office at the U.S. Department of Energy. Sound is by nature ephemeral—it’s here, then it’s not—it requires special recording equipment, it is invisible, yet it is foundational to how the ocean functions. Sound is a primary means of communication and navigation for most ocean creatures; it’s what enables them to find food and mates and avoid predators—in other words, it helps nurture underwater life. At the same time, invasive sound can be destructive to the ocean: a comprehensive survey published last year by the journal Science called for anthropogenic noise pollution to be included in assessments of cumulative pressures on marine ecosystems.4 It warned that noise pollution impacts a wide range of ocean life: from fishes to invertebrates, marine birds to reptiles, compromising their hearing ability and inducing physiological and behavioral changes.

Our restricted ability to hear natural underwater sounds and the increasing volume of the man-made noise that drowns them out has motivated the creation last year of UN Ocean Decade Research Programme on the Maritime Acoustic Environment (UN-MAE), a new effort to measure and understand physical, biological, and anthropogenic manifestations of sound in the ocean, both in specific geographical regions and across the planet. Under its guise, scientists such as Spence and her collaborator Thomas Weber, a program officer focused on ocean acoustics in the Office of Naval Research, are studying how different sounds correlate, and what they say about the larger symphony underwater. The program has brought together biologists, physicists, data scientists, pollution experts, climate scholars, and oceanographers into interdisciplinary working groups that use sound to analyze, evaluate, and predict ocean-life systems. Their scientific investigation will prioritize marine pollution, ecosystem restoration, and the study of the oceans in this era of climate change. “I think that we can do a much better job of integrating the science of sound and the understanding of soundscape into ocean science,” says Weber.

Take, for instance, sound-producing fishes5 such as the male bearded toadfish, which lives along the coast of the Caribbean from Belize to Panama and loves to care for juveniles. It emits a kind of guttural buzzing to entice females to lay eggs inside its den. “We might want to go listen to them,” Weber says, “because their presence, or their quantity, or their behavior, or some other thing that we can understand about them from the sounds that they’re producing, might tell us about the rest of the ecosystem.” For example, which animals are eating this noisy fish? How does their presence correlate with the presence of other important species on the food web? When it comes to sound in the ocean, says Weber, “we’re trying to pull the thread all the way.” It’s a long thread, punctuated by a series of seemingly disparate reverberations that tell us so much about the relationship between species, their behavior, and what threatens them.

Record your own voice in a room and look at the diagram on your device: A sound wave is made up of hills and valleys, compression and expansion. Its speed depends on how fast it bounces back from each compression. And since water is about 800 times denser than the air in your room, sound in water moves at 4,900 feet per second, more than four times faster than through air. Underwater acoustics depend on many factors, such as water temperature and ocean depth, which transform the sound wave through refraction, reflection, and dispersion. Typically, an audio waveform of your voice underwater will show more pronounced peaks and lows that are farther away from one another than an audio waveform that was recorded in air.

The snapping shrimp creates a bang that is one of the loudest sounds in the ocean.

An estimated two-thirds of all fish are believed to use sound to communicate for basic life functions.6 The more sophisticated cetaceans (whales, dolphins, and porpoises) have evolved over millions of years to formulate, send, and receive complex vocalizations, a mix of clicks and calls and echoes that help them find mates or food, to care for their young, defend their territory, avoid predators, or make their presence known to others in a particular location. This phenomenon has been described as “seeing with sound.” These species can produce sounds by moving air between the sinuses in their heads, which then echo back from objects found underwater, what’s known as echolocation. The echoes tell the cetaceans important details about the seafloor, the shorelines, and any underwater obstacles they might encounter, including other animals. Theirs is a language that scientists are just beginning to understand and appreciate.

Yet, as on land, so in the ocean humans are flooding the soundscape. Anthropogenic noise has made the ocean intolerably loud for some species. Studies estimate that since 1950, human-induced noise on the planet has doubled each decade (to a 3 dB increase total), particularly off the west coast of North America.7 Much of that sound reverberates underwater. An estimated 80 percent of the goods exchanged in global markets are transported across the ocean, and sound produced by transatlantic ships, industrial fishing operations, oil rigs, speed boats, and many other man-made machines and activities—such as resource extraction and explosions caused by wars or military exercises—overlay the original marine soundscape. The prospect of deep-sea mining in the ocean’s Twilight Zone, scientists say,8 would be disastrous. It would create a “cylinder of sound” that can be heard for miles, from the surface to the bottom of the sea. Anthropogenic noise can lead to species’ temporary or permanent hearing loss, cause stress responses, and even force animals to move away from their preferred habitats. Along the northern Gulf of Mexico, researchers are currently tracking the West Indian manatee, a species that is having to share its migratory path with shipping vessels, for signs of whether their behavior is changing.9 But not all marine life can adapt by migrating away from the noise: Sea cucumbers can’t move far, for instance, and shore crabs (Carcinus maenas) that had been stunned by the racket of a ship were found to shelter more slowly.10 The impact of the changing marine soundscape can also accumulate over time.

There is good news. Unlike most other ocean stressors, noise pollution can be alleviated because we know what causes it and how to control it. While some sounds humans introduce to the ocean are unavoidable in the context of our species’ development—for example, an underwater sonar communication exchange between two naval ships—others are merely unnecessary noise pollution that could be easily stamped out, such as a motor boat. Sound production, Spence points out, is not the motor boat’s purpose (in fact, it is energy lost in the form of sound), so it is the task of science to learn how to eliminate it. Solutions are within reach. Boats and ships could become electrified, which would make their engines ecologically cleaner, and their propellers quieter. “If we can make things more efficient,” says Spence, “then we’re not putting unnecessary sound into the ocean, which could be masking conversations that fish want to have.” What’s more, Weber says, if we can make machines quieter and more efficient, scientists will be better able to tune into the organic ocean sounds—echoes that are a “window into important processes that affect entire ecosystems.”

The data the UN-MAE interdisciplinary groups gather in the course of their collaboration, whether it be underwater recordings of specific weather phenomena or live-streaming of a unique fish conversation, will be made available online. “We know that baseline long-term data is like the sexiest thing, right?” jokes Weber. As the foundation of most research projects, baseline data is critical to making long-term comparisons and studying the ocean more broadly. Regardless of all the available technology, ocean sound remains elusive. If we don’t record a sonic moment in time, we will not be able to go back and record it later, Spence says. Someday, community scientists and concerned observers may be able to add to that baseline data, too, supplying their own recordings and their coordinates, trying to cull meaning from waveforms.

7. Overview of the impacts of anthropogenic underwater sound in the marine environment. OSPAR Commission (2009).