Shouldn’t we respect our animal elders, too? 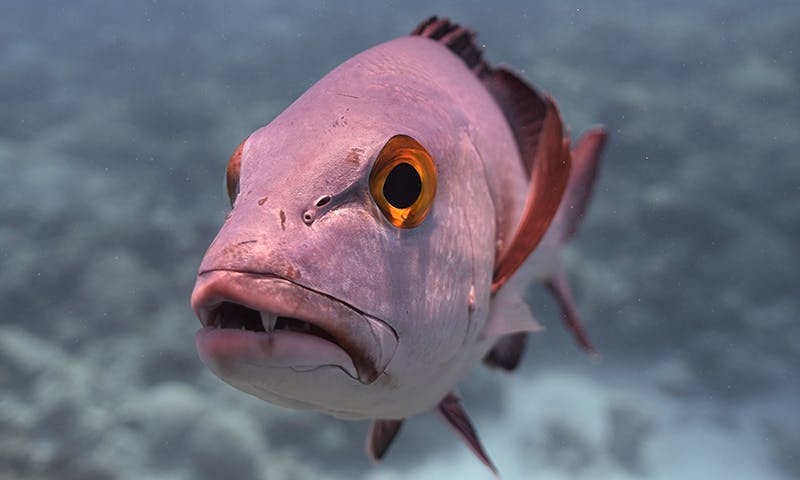 On July 31, my mother celebrated her 88th birthday. Based on recent discoveries, it is quite possible—even likely—that a fish somewhere turned 88 on the same day.

It could have been a snapper. In one study of 476 snappers of three species caught along the Western Australian coast and the Chagos Archipelago in the Indian Ocean, 11 specimens were over 60 years old. One two-spot red snapper was 79, and a midnight snapper was 81.

They are the oldest tropical reef-dwelling fishes known to science, and they are not likely to be rare examples of longevity in these species. The 81-year-old midnight snapper was found in a sampling of just 11 fish, making it improbable that the researchers stumbled upon an exception. All were apparently healthy when they were caught. “Some of these fish are probably getting up close to 100 years old,” says Brett Taylor, a marine ecologist with the University of Guam and leader of the study, which was published in the journal Coral Reefs.1

I’m sure I’m not alone in feeling a deep respect for a being who can live so long.

Venerable as these snappers were, they are nowhere near to being the reigning marine Methuselahs. Two male orange roughies—an inhabitant of deep seamounts—caught off Tasmania were 230 and 245 years old. Greenland sharks can live longer still, with one female examined by researchers tipping time’s scales at 400 years, give or take a century. There might be Greenland sharks cruising slowly beneath Arctic ice today who began life before Columbus set foot on American shores.

How and why some fishes live so long isn’t known for certain, but older individuals tend to be larger, which slows down metabolism, as does living in deeper, colder water. Those slow metabolisms are useful in environments where food is scarce, and genomic studies of long-lived fishes have found genes associated with repairing damaged DNA and reducing inflammation, which may reduce cancer risk and improve immune system function.2

Regardless of how they achieve it, I’m sure I’m not alone in feeling a deep, reflexive respect for a being who can live so long. It’s an extension of the respect shown by human cultures toward our elderly citizens. The oldest among us have navigated life’s vicissitudes and accumulated a wealth of experience; as Andy Rooney said, “The best classroom in the world is at the feet of an elderly person.” When Queen Elizabeth II died, the subsequent outpouring of adoration and veneration was fueled in large part by her advanced age and the record-setting length of her royal tenure.

Might we extend these feelings toward elderly animals, too? At the moment, our treatment of elderly fishes runs quite contrary to the values we have about oldness.

A case in point is the method of scientific choice for estimating the age of bony fishes like snappers and roughies. It entails examining their otoliths: bone-like structures floating in the inner ear that, much like tree rings, contain annual growth bands, leading some fish biologists to dub them “nature’s chronometers”—but in order to read one, the fish must be killed. Taylor, whose team caught snappers by angling and spearfishing in addition to studying archived specimens collected decades ago, says there are other, non-lethal ways to estimate a fish’s age, such as clipping off part of the dorsal spine, “but they are much less accurate, and more time-consuming.”

As for cartilaginous fishes like Greenland sharks, they can be aged by carbon-dating proteins that form before birth in their eyes’ lenses. The 28 specimens examined in the study that found the 400-year-old shark were not killed for that purpose, though; they were caught accidentally in fishing nets. This is not uncommon, and while Greenland sharks are no longer hunted for the liver oil once used to light lamps and lubricate machines, many other long-lived species are still caught commercially.

Consider the aforementioned orange roughies, once called “slimeheads.” When in the late 1970s their gastronomic potential was recognized, the species was given a more-palatable name and a feeding frenzy ensued. Within a decade the yearly global catch peaked at around 90,000 tons, then quickly declined. By 2000, three of the eight orange roughy fisheries in New Zealand, where most roughies are caught, had collapsed and were closed.

The collapse illuminated the unique vulnerability of long-lived fishes. Because they tend to be slow-growing and slow to mature—orange roughies don’t start reproducing until they are at least 20 years old—they tend to be susceptible to exploitation. “Longevity in fish is one of the reasons we have had major fisheries collapses,” says Taylor. A decimated population, even if left alone, may take a half century or more to recover.

Nowadays people can purchase sustainably caught orange roughy, secure in the knowledge that, at least according to the label, their populations will not be exploited to the point of destruction. But what about individuals? Might a very old fish stir sympathy? “When I started to get some over 200 years old, I was thinking, ‘Gosh, this thing had been tootling around in the ocean for two centuries, and suddenly it has a bad day and ends up on someone’s dinner plate,’” says Kyne Krusic-Golub, an Australian fish aging expert who has studied longevity in orange roughies.

Yet even the researchers’ reactions seem incommensurate with the death of such ancient beings—a 200-year-old bear, for example, would occasion far more sympathy. Perhaps this is a legacy of outdated ideas about fishes as cognitively primitive, lacking even the capacity for pain and living lives less rich than those of other animals.

Modern science, however, is revealing fishes to be so much more than just animated objects to be caught en masse and eaten. As I describe in What a Fish Knows: The Inner Lives of Our Underwater Cousins, fishes have minds; they learn, use tools, plan, and fall for optical illusions. Some have prodigious memories. Others can spot a familiar human face among 40 unfamiliar ones.

One common reef species, the bluestreak cleaner wrasse, has passed the vaunted mirror-self-recognition test, which suggests self-awareness comparable to our own. Fishes also demonstrate pain, pleasure, and distress; stressed-out surgeonfishes seek relief with soothing caresses from a cleaner wrasse or a trusted human. Living in societies has fostered cooperative behaviors and relationships, including communication between species, courtship, and parenting.

These are traits deserving of regard in fishes of any age, but of particular relevance to long-lived species is culture, which scientists define as behaviors passed on socially, not genetically, across generations. On land, for example, elephant clan matriarchs are repositories of important knowledge about herd migration routes, water sources, and when trees fruit. Scientists who study declining populations of elephants, and also long-lived whales, worry about the loss of knowledge accumulated through generations and passed on from elders to the young. That may partly explain why many whale populations have shown few signs of recovery in the half-century since large-scale whaling ceased.

Might removing the oldest individuals disrupt cultural transmission in long-lived fishes, too? In a review of fish learning skills led by Anders Fernö, a biologist at Norway’s University of Bergen, researchers considered that possibility.3 “We could wipe out whole cultural units of long-lived fish populations, and consequently important aspects of their adult behavior,” they wrote, “because there are no longer enough experienced fishes to copy.” In addition to the orange roughy, many other long-lived and commercially fished species, including cod, Patagonian toothfish—rebranded as “Chilean sea bass”—and Atlantic halibut, have not returned to anything like their historical abundance, even with improved management. Perhaps they miss the knowledge once possessed by older fish.

There’s much room for improvement in our relationships with fishes of any age, but the capacity of certain species to live for centuries makes our exploitation of them more poignant. Perhaps it would help if labeling programs, such as Monterey Bay Aquarium’s Seafood Watch, informed people about the longevity of species as well as their vulnerability. Knowing that fish in a supermarket freezer may have been born before Thomas Edison might make people think twice about eating them. Being a responsible consumer of fish could begin with respecting your elders.