Researchers discover that to sharpen its control over precise maneuvers, the brain uses comparisons between control signals—not the signals themselves. 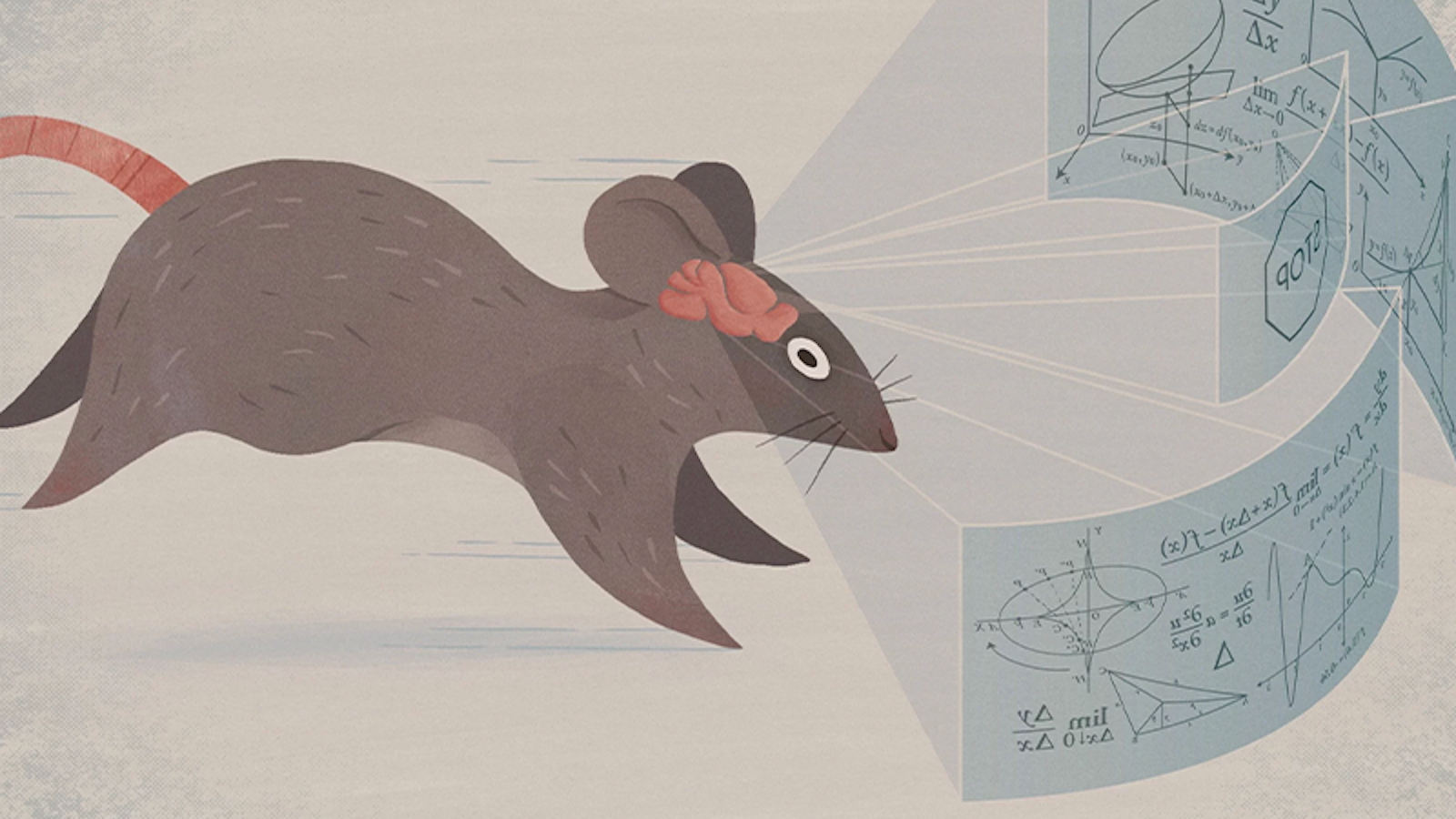 A mouse is running on a treadmill embedded in a virtual reality corridor. In its mind’s eye, it sees itself scurrying down a tunnel with a distinctive pattern of lights ahead. Through training, the mouse has learned that if it stops at the lights and holds that position for 1.5 seconds, it will receive a reward—a small drink of water. Then it can rush to another set of lights to receive another reward.

This setup is the basis for research published in July in Cell Reports by the neuroscientists Elie Adam, Taylor Johns, and Mriganka Sur of the Massachusetts Institute of Technology. It explores a simple question: How does the brain—in mice, humans, and other mammals—work quickly enough to stop us on a dime? The new work reveals that the brain is not wired to transmit a sharp “stop” command in the most direct or intuitive way. Instead, it employs a more complicated signaling system based on principles of calculus. This arrangement may sound overly complicated, but it’s a surprisingly clever way to control behaviors that need to be more precise than the commands from the brain can be.

Control over the simple mechanics of walking or running is fairly easy to describe: The mesencephalic locomotor region (MLR) of the brain sends signals to neurons in the spinal cord, which send inhibitory or excitatory impulses to motor neurons governing muscles in the leg: Stop. Go. Stop. Go. Each signal is a spike of electrical activity generated by the sets of neurons firing.

The story gets more complex, however, when goals are introduced, such as when a tennis player wants to run to an exact spot on the court or a thirsty mouse eyes a refreshing prize in the distance. Biologists have understood for a long time that goals take shape in the brain’s cerebral cortex. How does the brain translate a goal (stop running there so you get a reward) into a precisely timed signal that tells the MLR to hit the brakes?

“Humans and mammals have extraordinary abilities when it comes to sensory motor control,” said Sridevi Sarma, a neuroscientist at Johns Hopkins University. “For decades people have been studying what it is about our brains that makes us so agile, quick, and robust.”

The Fast and the Furriest

To understand the answer, the researchers monitored the neural activity in a mouse’s brain while timing how long it took the animal to decelerate from top speed to a full stop. They expected to see an inhibitory signal surge into the MLR, triggering the legs to stop almost instantaneously, like an electrical switch turning off a lightbulb.

But a discrepancy in the data quickly undermined that theory. They observed a “stop” signal flowing into the MLR while the mouse slowed, but it wasn’t spiking in intensity fast enough to explain how quickly the animal halted.

“If you just take stop signals and feed them into the MLR, the animal will stop, but the mathematics tell us that the stop won’t be fast enough,” said Adam.

“The cortex doesn’t provide a switch,” said Sur. “We thought that’s what the cortex would do, go from zero to 1 with a fast signal. It doesn’t do that, that’s the puzzle.”

So the researchers knew there had to be an additional signaling system at work.

To find it, they looked again at the anatomy of the mouse brain. Between the cortex where goals originate and the MLR that controls locomotion sits another region, the subthalamic nucleus (STN). It was already known that the STN connects to the MLR by two pathways: One sends excitatory signals and the other sends inhibitory signals. The researchers realized that the MLR responds to the interplay between the two signals rather than relying on the strength of either one.

As the sprinting mouse prepares to stop, the MLR receives an inhibitory signal from the STN. Almost immediately afterward, it also receives an excitatory signal. Each signal comes on slowly—but the switch between them is fast, and that’s what the MLR pays attention to: It registers the difference between the two signals. The greater the difference, the faster the change in the inhibitory signal and the more rapidly the MLR commands the legs to stop.

The researchers cast the stopping mechanism in terms of two basic functions of calculus: integration, which measures the area under a curve, and derivation, which calculates the slope at a point on a curve.

If stopping depended only on how much of a stop signal the MLR received, then it could be thought of as a form of integration; the quantity of the signal would be what mattered. But it doesn’t because integration by itself isn’t enough for rapid control. Instead, the MLR accumulates the difference between the two well-timed signals, which mirrors the way a derivative is calculated: by taking the difference between two infinitesimally close values to calculate the slope of a curve at a point. The fast dynamics of the derivative cancel out the slow dynamics of the integration and allow for a fast stop.

“There’s an excitatory signal and an inhibitory signal and the two are being compared instantaneously,” Sur said. “When that value hits a certain amount, there is a switch thrown that makes the animal stop.”

This derivative-based control system may sound indirect, but it makes strategic sense. When a mouse navigating virtual reality or a tennis player racing across a court is approaching a stopping point, they might find it useful to know how fast they are going. But for planning what they will need to do next, it’s more useful for them to know how rapidly they are speeding up or slowing down—the derivative function of their movement.

“It allows you to anticipate and predict. If I know the derivative, the rate of change of velocity, then I can predict what my velocity will be at the next step,” Sarma said. “If I know I have to stop, I can plan for it and make it happen.”