The Case for Popularizing Ocean Science 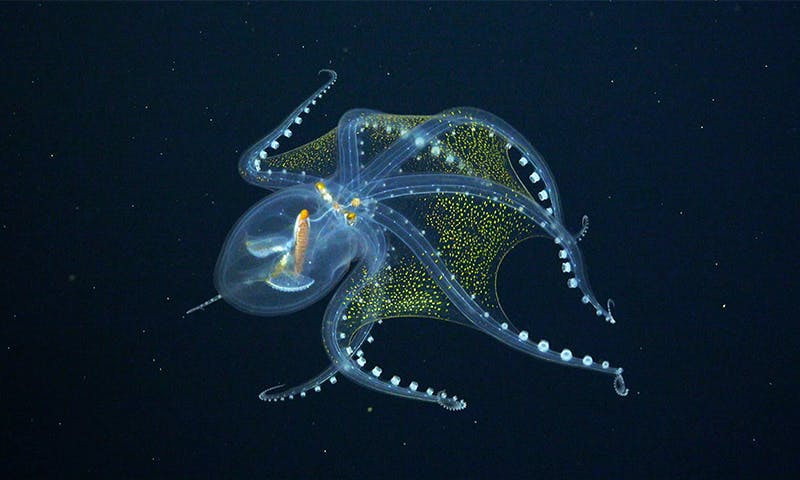 Carlie Wiener is used to early mornings. It started with dolphins. Wiener would rise before daybreak to observe Hawaiian spinner dolphins as part of her dissertation on human-dolphin interaction—research that played a role in providing stronger protection for spinner dolphins. Today, Wiener, who is based in Oahu, Hawaii, is Schmidt Ocean Institute’s director of communications and engagement strategy, but still gets up well before sunrise to speak with marine science collaborators all over the world, sharing news of the strange and awe-inspiring discoveries made by Schmidt’s cutting-edge research vessel.

It’s this marriage of marine science and communications that Wiener finds so enthralling, whether it’s giving testimony to Congress on behalf of deep-sea exploration or leading storytelling workshops for science students. “In short, making something tangible that tends to be intangible for a lot of people,” Wiener says. “To me, that’s very powerful.”

Nautilus spoke with Wiener about her passion for science communication, her love of cephalopods, and why bringing ocean science to pop culture might help preserve marine life.

You’re from Toronto, so what got you interested in the ocean?

I was fascinated by the ocean from the time I was 3 years old. We took family trips to Florida, and you couldn’t pull me out of the ocean. In high school, while on vacation, I volunteered at the Marine Mammal Rehabilitation Center in Key Largo, Florida. There was a mass rough-toothed dolphin stranding, like 50 of them. I wanted to help rescue the dolphins, but also to help the public understand what conditions had led to the stranding. I fell in love with the work and so went back for a summer to volunteer there. I’ve been on a communications-ocean science beat ever since.

What was your field of study in school?

I did my undergrad in communications, but my true heart was in science, and so I went back for my master’s and Ph.D. I wanted to strike a balance between social sciences and the biological sciences—to explore how humans impact the marine environment. For my dissertation, which I finished in 2013, I looked at spinner dolphins and swim tourism in Hawaii. I wanted to understand how people’s movements in the water impacted the dolphins’ behavior and overall fitness. It was a complex three-part study, but I loved it and I probably collected way more data than I needed to because I had such a good time doing it.

At the time, a lot of people were concerned about the dolphin swim industry and how it was impacting local dolphin populations. My work explored the economics of the dolphin tour boats, and found that it was the number of boats and crowding that was causing the most dolphin harassment. Ironically, it was people who really cared about the dolphins who were inadvertently harassing them the most.

Over time, this became a theme in my career: ensuring information and messaging is distributed to the public and policy makers, for making fact-based decisions that are grounded in science.

Even when you are in a coastal region, most people aren’t engaging with the ocean in a tangible way.

Did that research influence the work you do now?

I don’t really do field work anymore, but it did allow me to explore the attitudes and behaviors of people and how humans interact with the ocean. Looking at the human piece of it is really important, and asking questions like, what is fueling people’s attitudes and how do we shift them?

That’s my focus now: Sharing cutting-edge science from Schmidt Ocean Institute’s research vessel and bringing the oceans to people in a way that maybe will help them understand our vast oceanic system, and encourage interest in the ocean, which I do via advocacy, partnerships, and a lot of outreach.

And you’ve done a lot of teaching too, right?

I love teaching and working with students—getting them comfortable with science and talking about how to present their ideas in an exciting way. I’m also passionate about bringing equity and diversity to the field of ocean sciences and supporting women who want both a career and a family. Balancing a science career and motherhood is not easy, and I hope to pave the way for others by raising issues in sciences that still need to be addressed. Schmidt Ocean Institute has been exemplary in their leadership by creating small grants for caregivers that go out to sea. Unfortunately, there are still a lot of the challenges that women face, not just in science but in present-day American society. That’s something we need to work on and make it easier for the next generation.

Do you think that ocean science is getting more diverse?

There’s a lot more opportunity and programs now focused on increasing diversity in ocean science. There is also more awareness of how we conduct our science in the places we go—not just doing “parachute science,” but really building capacity and engagement in the regions where we work. It’s all very promising, but I think we still have a long way to go.

The ocean makes up more than 70 percent of the Earth’s surface and yet it’s still so abstract and mysterious. What do you think is the most difficult challenge in communicating ideas about the ocean?

The ocean may cover much of the Earth’s surface, but many people aren’t interacting with it on a day-to-day basis. The space industry does a much better job of engaging people than the oceans—no matter where you are in the world, all you need to do is look up and you see stars. It’s an instant reminder of space. You don’t have that with the ocean. There’s a lot of landlocked places. Even when you are in a coastal region, most people aren’t engaging with the ocean in a tangible way. They’re going about their lives and not really thinking about what’s happening out there, especially because it seems so vast that it’s almost overwhelming. I think the biggest challenge is bringing this kind of wondrous, scary, massive world to people in a way that they can digest it.

The deep sea is a place of unknown possibilities.

How can we get people interested in the oceans, then?

One idea that we are working on at Schmidt Ocean Institute, in collaboration with our partners at Nautilus magazine and Nekton, which is another ocean research foundation, is to bring the oceans to pop culture. Space has a stronghold in pop culture—most science fiction is about space, and it captures kids’ attention with the heroism around astronauts and space voyage. We need to have that for the ocean, too.

What would you consider your most important or profound ocean experience?

I’ve had the fortune of working in the Papahānaumokuākea Marine National Monument several times in my career, and I would say it’s one of the most special places on the planet. It’s been under protection for many years, and was expanded during Obama’s administration, so that it’s now one of the largest protected areas in the world. I worked with scientists at the University of Hawaii and managers at the monument for many years, before starting at Schmidt Ocean Institute. Papahānaumokuākea is in the Northwestern Hawaiian Islands. If you look on the map, it’s northwest of the eight main islands, and it’s the northern edge of where corals can grow. There’s so much endemism there—species are different and there is little evidence of human impact. You still see large schools of fish like giant trevally and Galapagos sharks. I’m very scientifically minded, but you feel a different energy there.

Do you have a favorite sea creature?

I’m a cephalopod nerd. My kitchen plates and pillows have octopuses on them. The glass octopus that Schmidt Ocean Institute’s underwater robot SuBastian captured last year takes the cake, for sure.

They’re so amazing. It’s a cliche, but they really are like an alien life form.

A lot of people don’t realize how smart octopuses are. They are intelligent in a different, almost alien way. Their biomimicry—the way that they can just transform themselves to match whatever setting they’re in, is amazing.

The tragedy is that they live such short lives. Imagine if they lived a long life, how smart they’d be—probably running the place.

That’s a great idea for a science-fiction novel. Have you read The Swarm?

It’s a great ocean science-fiction book. It’s basically the story of how the animals in the ocean are tired of humans treating them so poorly, so they start to take over. It’s really, really good.

I’ll have to check it out. I did read Douglas Adams’ So Long and Thanks for All the Fish.

I started my Ph.D. dissertation with that title.

A great example of the ocean in pop culture. Anyway, where do you think the ocean is headed today?

I’d be lying if I said the ocean, and Earth system in general, isn’t in trouble. But I remain hopeful for several reasons, among them the fact that the deep sea is a place of unknown possibilities. We’re discovering new species and different underwater structures with every excursion. Almost every time we go out, we discover new things. We have to try and understand how it all fits together—how shallow water ecosystems connect or are influenced by deeper waters, and how they work with the different parts of our other oceanic systems.

Another thing that gives me hope: We’re living in a time where we have unparalleled access to technology. And that technology gives us the power to understand how to make sweeping changes. It gives us the ability to quickly understand and characterize our oceans, and ways to address a changing climate that might otherwise elude us. The next generation, the youth of today, are empowered like never before. I think it’s made them strong and fuels their activism and willingness and desire to change the world.