Internal combustion is surviving by adapting. 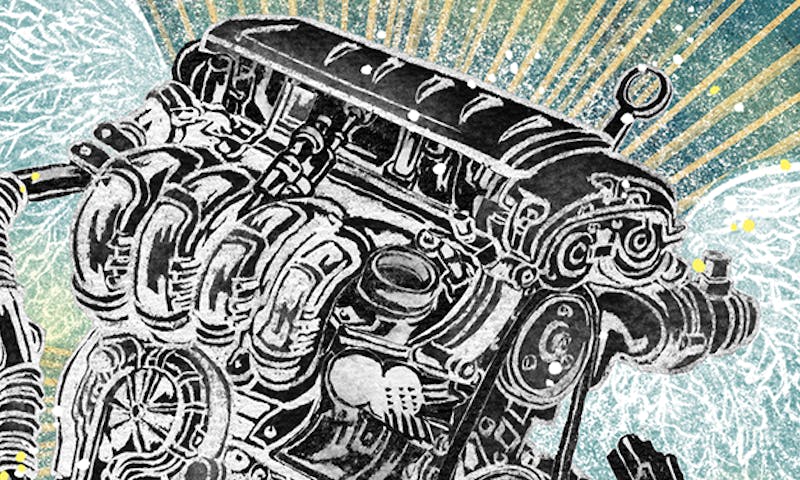 The internal combustion engine is a throwback. It is a holdover from the age of steam. Its details have been refined, its materials improved and its output multiplied, but the basic mechanism—a piston moving up and down in a cylinder bore—was invented before the phonograph or the lightbulb.

The product of an era of cheap, abundant energy, the combustion engine is also flagrantly wasteful. In a four-stroke gasoline engine—the engine that is most likely in your car, your motorboat, maybe even your generator—a piston is first driven downward, sucking air into the cylinder. Next, the piston makes an upward stroke that compresses the air; then a spark ignites the fuel-air mixture, which explodes, thrusting the piston downward. The final upward stroke pushes out the spent mixture. In that cycle of four piston strokes, today’s gasoline engine typically converts 14 to 30 percent of the energy stored in fuel into useful work. The rest is lost as heat and friction.

Installing that engine in a vehicle compounds the waste. Accessories such as water pumps and air-conditioning compressors draw energy without contributing to forward motion. Rolling resistance of the tires wastes fuel, as does friction in bearings and transmission gears. Aerodynamic drag forces the engine to work hard just to maintain a steady highway speed. All told, the car you drive puts about 20 percent of the fuel’s energy to work in driving down the road. Clearly, this petroleum-swilling greenhouse-gas machine is overdue for a disruption. It’s no wonder that each new electric car, breakthrough in battery chemistry, or promise of mass-produced fuel cell vehicles sounds like a death announcement for the internal combustion engine.

Electric cars seem poised to put the last nails in the coffin. With few moving parts to generate friction, electric motors are vastly more efficient—turning as much as 96 percent of the energy they consume into useful work. They give up very little waste heat, and, if fed via alternative energy, can produce emission-free power. Besides, a car powered with an electric motor has clear design advantages. Its nearly flat torque curve (pounds-feet graphed against engine rotational speed) means it does not need a complex transmission, reducing cost and boosting efficiency at the same time. Combustion engines usually need to spin at several thousand revolutions per minute (rpm) to produce peak torque, but electric engines burst into maximum torque the moment the shaft turns. That’s what gives electric cars and hybrids such a satisfying snap away from a stop.

For all these reasons, the case against the piston engine is clear. Its days seem to be numbered. But the reality is that internal combustion is not going anywhere soon. Don’t tell Elon Musk, but the heat engine, to use the handy moniker, will probably rule the roads until at least 2050.

The persistence of the combustion engine can’t be blamed just on market inertia or the power of Big Oil. It endures—and dominates—because it is so adaptable. Tiny versions power yard trimmers and chainsaws. Huge, highly efficient models propel bulldozers and cargo ships. In a car, this engine can be configured as a mild-mannered gas sipper or a high-revving race device.

It is beautifully suited for transportation, because it exploits a fuel that is supremely portable and energy-dense. “Liquid hydrocarbons are liquid gold,” says John B. Heywood, a mechanical engineer who is the Sun Jae Professor Emeritus at M.I.T. The gasoline engine refuels in minutes, after which it can cover 400 to 500 miles. And fuels, too, are adaptable: During the last century, as roads improved and cars began going faster, gasoline was re-engineered to help engines extract its energy.

In short, the long, rich life of the gasoline engine is the outcome of what paleoanthropologist Rick Potts calls variability selection: The idea that in a rapidly changing environment, only the versatile survive. Potts, an expert in human origins with the Smithsonian Institute, thinks that early hominids prevailed because they were flexible. The climate our ancestors confronted during the early Pleistocene fluctuated dramatically, with frequent shifts in temperature, water supply, food sources, vegetation, and competition. They survived this time of turmoil because they were generalists, says Potts. With long arms and long legs, they could climb trees in the forest or walk for miles across savannah. With big brains, they could figure out how to adapt to changing circumstances, and invent social systems and technologies to help them cope. They weren’t faster or stronger or more efficient than other creatures—they were more adaptable.

The piston engine looks like another example of survival through adaptability. It is cheap to build, has conformed to the requirements of various fuels and physical layouts, and has advanced in lockstep with developments in metallurgy and pollution control. Continual refinements mean that today’s internal combustion engine emits 99 percent less pollution than its progenitors in the 1960s. In regions with poor air quality, automakers remind us, today’s engines actually push cleaner air out through the tailpipe than they ingest. Today, confronted with the task of reducing carbon dioxide emissions and reining in energy use, the engineers, industry experts, and investors who know engines best are far from giving up on internal combustion. In fact, they’re upping their investment. This old technology has a lot of miles left in it yet.

Few machines around today have evolved as much as the internal combustion engine. The earliest versions were primitive tools, slow and unreliable. Improvements came with advances in metallurgy and a better understanding of the combustion process. Starters matured from hand cranks to push-button electrical devices; electric spark plugs guaranteed more consistent and smoother operation. The invention of liquid cooling allowed designers to move from crude single-cylinder designs to the six- and eight-cylinder powerhouses that dominated the auto industry in the middle of the 20th century. More recently, computer-guided innovations like precise control of fuel distribution in the engine and improved timing of valve opening and closing have made it possible to combine high power output with smooth, even performance at low speeds.

The new demands on the combustion engine are focused on emissions, and research professor John M. DeCicco of the University of Michigan Energy Institute thinks that the gasoline engine will meet them too. “There are a rich set of opportunities to improve efficiency that will always undermine the alternatives, as far as the eye can see,” says DeCicco. “The efficiency horizon extends very far into the future.” To meet this new challenge, manufacturers are fine-tuning everything from the design of the combustion chamber to the parameters of the transmission to the way fuel and air are delivered into the heart of the engine.

Anderson also explains that the way an engine is run is critical, since every combustion engine has its efficiency sweet spot. “We want to make that island of efficiency as big as possible,” he says. Simply taming friction can also provide a big payoff: bringing it down by just 8 percent improves gas mileage by 1 percent. The latest version of GM’s 2-liter turbocharged engine has reduced friction by 16 percent compared with its predecessor.

Changes in fuel delivery are also coming. Thomas Apostolos, president of Ricardo, Inc., the United States arm of a global engineering consultancy with a nearly-100 year track record in engine development, anticipates the incorporation of spray-guided direct fuel injection and lean stratified charge, in which the ratio of fuel to air is reduced, but the fuel is concentrated exactly where it’s most needed.

The gasoline engine may also be on the verge of joining up with its kissing cousin, the diesel engine. In R&D circles, this marriage has been a perennial topic of discussion. Diesels benefit from being unthrottled: They control engine speed by varying fuel delivery, rather than limiting air intake with a mechanical throttle, which generates drag and friction. Because diesels initiate combustion with internal heat rather than a spark, they typically have very high compression ratios—a lot of “squeeze” applied to the air inside the cylinder. These high pressures extract more work from the chemical energy stored in the fuel. As engineers experiment with lowering the compression ratios in diesel engines to control emissions, and raising them in gasoline engines, the two technologies are already approaching one another, says Bill Woebkenberg, senior engineer in charge of fuels and technical and regulatory affairs at Mercedes-Benz USA.

One promising example: the homogeneous charge compression ignition (HCCI) engine. In this hybrid, made possible by improvements in computer modeling and engine controls, internal engine heat ignites an evenly distributed mix of air and fuel inside the cylinder. The result is a clean-running engine that General Motors researchers say could be 80 percent as efficient as a diesel engine for about 50 percent of the cost.

HCCI engines have had problems maintaining smooth operation, so the current plan is to build a single engine with two operating modes. Conventional combustion would be used for hard acceleration, and an HCCI mode would be used for light loads, like highway cruising. According to Woebkenberg, Mercedes has already had success with this model in European applications.

Even more radical ideas are brewing. New ways to arrange the mechanical layout of combustion engines may promise greatly improved efficiency. EcoMotors International in Michigan, for example, is developing an opposed-piston, opposed-cylinder engine that can produce one horsepower per pound of engine weight. Other companies are developing dual-compression, dual-expansion engines, which spread the work over extra cylinders, separating compression and power cycles.

The gasoline engine is a fast-moving target. In fact, the irony may be that it is moving faster than some of the technologies that are threatening to replace it. Carbon emissions of U.S. autos are on track to decline by 2.1 percent per year, while emissions from power plants are falling at a projected rate of less than 1 percent per year, says DeCicco. It is these plants, two thirds of which use fossil fuels, that power electric cars. In fact, the Union of Concerned Scientists has stated in a report that battery-powered vehicles do not hold a clear greenhouse advantage over the best gasoline or hybrid models in U.S. states that rely heavily on coal-generated electricity.

Even the average gasoline engine may soon approach its electric rival in terms of grams of carbon dioxide released per mile. “With nothing borrowed from Star Trek, we’ve developed a Ford Focus program with carbon dioxide output of 97 grams per kilometer,” Apostolos says of Ricardo. “In the 2040 time frame, we’ll get that to 30 grams, which makes internal combustion engines competitive with electric vehicles.” And then of course there is cost: Batteries need to become 10 times cheaper, and improve their energy density by 100 times, to match gasoline. The Chevrolet Volt plug-in hybrid, for example, carries a 16 kilowatt-hour battery, which accounts for about $8,000 of the car’s cost. It stores the energy equivalent of one gallon of gasoline. “A scalable business case is so far away,” says DeCicco.

Which is not to say that electric and hydrogen development programs are not worthwhile—they clearly are. But, in fighting the gasoline engine, they will have to deal with more than just an outstanding performer: They will have to vanquish a true engineering chameleon.

Norman Mayersohn is an editor for the Automobiles section of The New York Times. His transportation fleet includes a Prius hybrid (the family’s seventh Prius), a 1967 Camaro SS350, a well-used Volvo station wagon, and two motorcycles. A former drag racer and organic farmer, he is always fascinated by learning how things work.